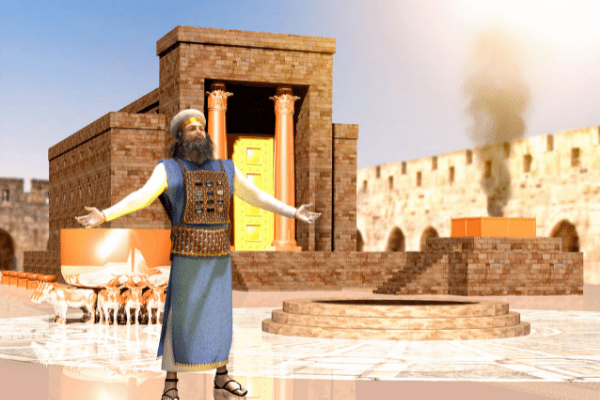 King Shlomo sent for Hiram and brought him down from Tyre.

Every Shabbat, after the Torah is read in the synagogue, an additional reading is made which is taken from the Prophets. This reading is called the haftarah and is thematically linked to the Torah reading. When the Torah portion of Vayakhel (Exodus 35:1-38:2), which discusses the construction of the Tabernacle, is read, the haftarah is taken from I Kings 7:13-26. This section tells of how King Solomon turned to King Hiram of Tyre, a port city on the Mediterranean coast about 140 miles northwest of Jerusalem, to help him construct the Temple in Jerusalem. This, of course, parallels the construction of the Tabernacle as related in Exodus 35-38.

Hiram was able to offer Solomon wood and skilled workers, including artists to work with precious metals, fabric, and engraving. Solomon, in turn, would provide thousands of laborers.

In addition to creating the Temple, both kings benefitted from developing trade routes. Hiram, a Phoenician king, reigned from 980 to 947 BCE.  According to the first-century Romano-Jewish historian Josephus, Hiram lived for 53 years and reigned for 34. During Hiram’s reign, Tyre grew from a satellite of Sidon into the most important of Phoenician cities, and the holder of a large trading empire.

Hiram’s connection to Jerusalem first began with King David. His artisans helped David construct his palace in Jerusalem. Solomon also purchased from Hiram his kingdom’s famed cedar trees and huge blocks of the choicest quarried stone.  Solomon assumed such heavy debts in building the Temple that he is forced to pay off King Hiram by handing over twenty towns in Galilee (I Kings 9:11).

Hiram’s prominent role in constructing the Temple is especially remarkable. David was prevented from building the Temple because he was “a man of battles and have shed blood” (I Chronicles 28:3). It seems inconsistent that a pagan king would then be permitted, or even want to play a major role in the construction of the Temple.

But Hiram was clearly not a typical pagan. After Solomon contacted him, requesting substantial help in building the Temple, Hiram responded by praising the King of Israel and the God of Israel in a decidedly un-pagan manner.

“Because Hashem loved His people, He made you king over them.”Huram continued, “Blessed is Hashem, God of Yisrael, who made the heavens and the earth, who gave King David a wise son, endowed with intelligence and understanding, to build a House for Hashem and a royal palace for himself. II Chronicles 2:10-11

The Midrash refers to Hiram in connection with the prophet Ezekiel. In Ezekiel’s second vision, he sees  “a figure that had the appearance of fire” (Ezekiel 8:2) which takes the prophet by the hair of his head, lifting him up to a place between heaven and earth, to Jerusalem, where he has visions of God. The Midrash  (Yalkut Shimoni II 367) relates that Hiram became overly proud (Ezekiel 28:2) after God granted him an exceptionally long life on the merit of helping to construct the Temple. Hiram constructed a celestial palace in the middle of the sea set on four enormous pillars, upon which he raised seven jewel-encrusted firmaments to mimic the seven levels of heaven. God sent Ezekiel to chastise Hiram but the human prophet stated that he could not, as Hiram was hovering in the air. So God sent the spirit who pulled Ezekiel up by his hair. When Hiram saw Ezekiel, he became terrified. As commanded, Ezekiel challenged him, asking why he was so prideful.

Hiram answered: “Though I was born a mortal man, nevertheless I will live forever. Just as God’s dwelling place is in the heart of the seas, so is mine. Just as God’s dwelling is above seven firmaments, so is mine. And not only that, but how many other kings have died, but I will live forever. David, king of Israel, reigned for forty years and died, but I live on. Solomon reigned forty years and died, but I live on! Indeed, I have buried twenty-one kings of Israel, but I am still alive and well! Behold! I am a god and my dwelling place is a divine dwelling!”

Ezekiel said to Hiram, “But have there not been kings greater than you though they have not done what you have done?”

Ultimately, God sent Nebuchadnezzar to conquer and kill Hiram. God also tore open the earth and hid Hiram’s celestial palace, holding it for the righteous to dwell in after the Messiah comes.

Though according to this Midrash his accomplishments ultimately led to his downfall, we can not ignore Hiram’s contributions to the construction of the Temple. Just as the first Temple was constructed with the assistance of members of gentile nations, the second Temple was built thanks to the permission and encouragement of Cyrus of Persia, and the third Temple will one day also be built with the participation of righteous non-Jews (see commentary to Isaiah 2:3). This international participation is necessary, as the Temple is meant to be a “house of prayer for all nations” (Isaiah 56:7).