The Tabernacle: Making God Our Neighbor 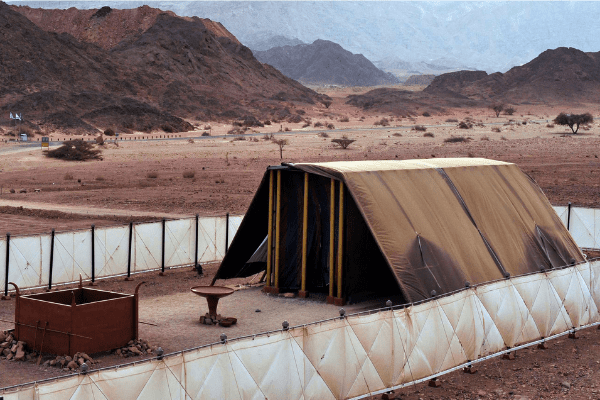 And let them make Me a sanctuary that I may dwell among them.

In the book of Exodus, God gives Israel a commandment that seems decidedly undivine; to build Him a house to live in.

Significantly, the verse does not say “that I may dwell within it.” The Mishkan is not intended to physically contain Hashem within its walls. Rather, the Seforno explains, it is a place which enables Hashem to dwell “among them,” meaning in the midst of the Children of Israel. Unlike pagan places of worship, the Mishkan is not meant to provide a home on earth for a god. Rather, the Mishkan, and ultimately the Beit Hamikdash in Yerushahlayim, are designed to facilitate the relationship between Hashem and His children, where every person can go to elevate himself or herself spiritually.

Though God is present throughout all of creation, this aspect of God, the most open and revealed aspect, is manifest only amidst the Children of Israel and is, therefore, called the Shechina (שכינה), literally, the ‘dwelling.’

Shechina is the only name of God that is in the grammatically feminine form which, in kabbalah, refers to the trait of receiving. God is the ultimate source, however, in the Tabernacle, when all of Israel was gathered in His service, God received from His people.

As such, the Shechina in the Tabernacle is the aspect of God that is considered closest to Man’s temporal, everyday experience. The Temple service became the pathway for the people to present their feelings and spiritual needs to God.

Rabbi Yitzchak Luria, the 16th century Safed mystic known as the Ari, explained that after Creation, God’s infinite holiness was hidden in the finite material elements of the world. This aspect of God could only be revealed in this world in the Tabernacle when the people were unified in His service.

The Talmud explains that even though the Tabernacle and Temple were built as dwelling places for the Shechina, when the Temple was destroyed and the people exiled, the Shechina was still found among the people, wherever they were (Megilla 29a).

This “neighborly” relationship with God suffered when the Temple was destroyed and the people were exiled. But the prophets promised that this was a temporary condition. The Messianic era will bring the people of Israel back together in the Land of Israel to rebuild the Temple where the Shechina can once again manifest.