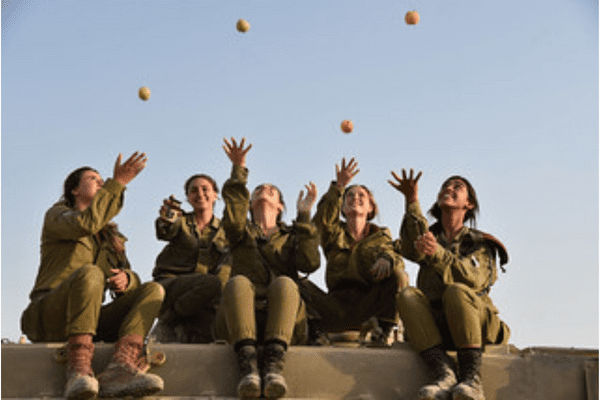 Has any people heard the voice of a god speaking out of a fire, as you have, and survived?

The annual month of reserve duty in the Israeli army brings together men from all segments of society who would typically not meet. But, since we are all dressed in green and depend on each other, we get along, accepting each other’s differences and accepting the duty as a form of holiday. The notable exception was Shmuel who was from Tel Aviv and hated the desert patrols and spartan conditions. It took me a few conversations to realize he was also angry because he was anti-religious and resented having to serve with religious soldiers.

Over coffee one evening, Shmuel pointedly asked one of his religious counterparts: “Why are you religious anyway? Do you really believe the stories in the Bible about the plagues in Egypt and God appearing to an entire nation at Mount Sinai?”

“Of course, we believe it,” the religious soldier said innocently. “Every year at the Passover seder my father tells me about it and tells me it’s true. When I was young, I heard my grandfather tell my father, and my grandfather heard it from his father. The stories have been passed down from generation to generation, starting with our ancestors who themselves stood at the foot of the mountain.”

In Deuteronomy, Moses asks the Jews a strange question: “Has any people heard the voice of a god speaking out of a fire, as you have, and survived” (Deuteronomy 4:33)?

Moses is, of course, referring to the revelation at Sinai. It was a breathtaking event. But what was unique and significant about Mount Sinai was that the Children of Israel heard God speak directly to them without an intermediary, not that they lived to tell the tale. Why does Moses add in the words “and survived”?

The classic tale of spiritual revelation usually involves a single man seeking out life’s deepest secrets. Perhaps he embarks on a long and arduous solitary trek, climbing a snowy peak in Tibet to inquire of a wizened old monk. In other religions, a single prophet encounters God and relates the encounter to his followers. But the Bible tells a very different story.

The greatest revelation, a direct communication from God, took place in the presence of the entire nation. 600,000 men, and many more women and children, stood together at the base of the mountain, experiencing what few men had experienced since the world was created; hearing directly from God. The event was so unlikely that no one would have believed it, except that an entire nation was telling the same story, consistent in every detail. And like a large stone thrown into a quiet lake causes ripples on the surface which spread far and wide long after the stone disappears beneath the surface, an event of that magnitude left its imprint on the nation.

The only proof that Mount Sinai actually happened is the nation of Israel. And the proof that the event was massive is that we are still talking about it, 3,312 years later. It has been passed down parent-to-child, person-to-person, in a living, unbroken and unbreakable chain. A story that big, that impactful, that TRUE, you pass on to your children.

Though it is true that human history tells of so many other nations that told different stories of their Gods, those nations are gone, having disappeared into the sands of time. There have been individuals who have claimed to experience revelation, but they have no living descendents.

The Jews stood at Mount Sinai, heard directly from God, and survived. They not only lived through the experience, they passed it on to their children, and their children to theirs. They lived, and the vision is alive!

Year after year, generation after generation, we continue to survive. Just as we keep the story alive, the story has kept us alive; its inner power emanating from its truth. Our very existence as a nation today is improbable. As improbable as an entire nation hearing directly from God.