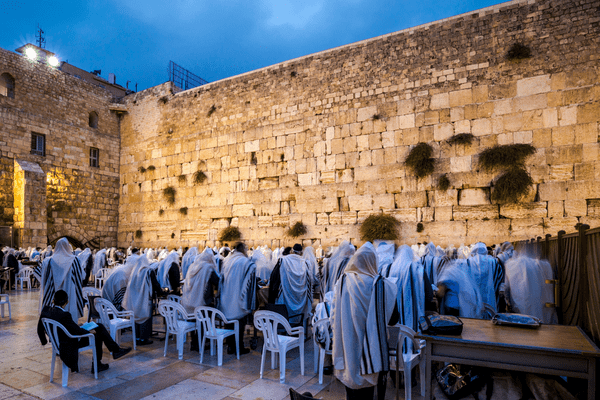 Return, O Yisrael, to Hashem your God, For you have fallen because of your sin.

Rabbi Shmelke of Nikolsburg (1726-1778), an early Hasidic master and kabbalist in Poland, once told the following story (as recorded in Bar Mitzvah & Tefillin Secrets: The Mysteries Revealed by Rabbi Dovid Meisels):

A man left his house on a very hot day, intent on reaching the neighboring city. He started to walk, while the burning sun beat down on his head. After walking some distance, all the while sweating profusely, his knees started feeling weak, and the package he was carrying on his shoulders felt heavier than ever. As he recalled how many more hours of walking he still had in front of him, and how difficult of a trek this was becoming, he began to lose hope and the spirit to go on. So he decided to turn around and head for home, and to wait for another opportunity with better weather.

According to Rabbi Shmelke of Nikolsburg, had this man been smarter and more psychologically astute he would have made it to his destination. What should he have done differently?

The answer to this question can be found in the reading from the prophets, known as the haftarah, for the Sabbath between Rosh Hashanah (Jewish New Year) and Yom Kippur (Day of Atonement). This Sabbath is known as Shabbat Shuva, the Sabbath of return, because the reading from the prophets is taken from Hosea 14 and starts with the words shuva Yisrael, “Return, O Israel, to the LORD your God” (Hosea 14:2)

The Hebrew for “to the LORD” is ad Hashem, which literally means ‘until the LORD’. This formulation puzzles some of the commentators who ask why Hosea uses the word until, which implies going only up until a certain point but no further, instead of a different word that would imply returning all the way to the Lord?

In order to understand this formulation in the Hebrew text, let’s go back to Rabbi Shmelke’s story. Rabbi Shmelke continues:

Had he been smarter and more psychologically astute, he would not have focused at all on his final destination and how far away it is. Rather, he should say to himself: I just want to make it until that tree over there. Upon reaching the tree, he should rest a bit and then say: I just want to go until that stone over there. This way, little by little, step by step, he will reach the neighboring city in due time.

Rabbi Shmelke concludes that is the message behind the formulation of the verse in Hosea. The way to properly repent and return to the Lord, to be successful in your journey back to God, is to go ‘until’. This means that you should take small steps and set for yourself small, reachable, goals. As Martin Luther King, Jr. one said: “You don’t have to see the whole staircase, just take the first step.”

Coming closer to God and returning from sin is a lofty, but sometimes overwhelming, process. If you try to take on too much at once, it will most likely backfire and you might find the whole exercise too challenging. Instead, pick one area at a time in which to improve. If you follow this formula you will find that, in time, you will make it all the way back to God.