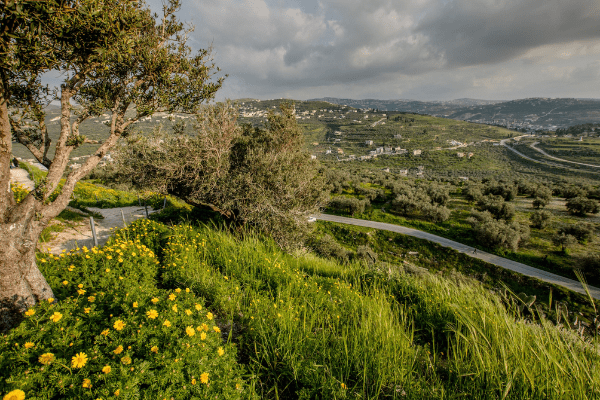 “Send men to scout the land of Canaan, which I am giving to B'nei Yisrael; send one man from each of their ancestral tribes, each one a chieftain among them.”

The Torah portion of Tazria (Leviticus 12–13) deals with tzaraat, a disease usually mistranslated as leprosy. Tzaraat is a malady that afflicts the body, clothing, and the walls of houses. The afflicted is diagnosed by the priest and rendered impure. Tzaraat is characterized by a whitening or splotchy bleaching of the skin, raised manifestations of scales, scabs, infections, and rashes. The manifestation of tzaraat is termed a nega (נגע), or ‘affliction’.

This chapter (Leviticus 13) details the spiritual disease known as tzaraat (צרעת), similar in presentation to leprosy, and the subsequent process of purification from this ailment. Tzaraat is understood to be a punishment for a number of sins, most famously the sin of lashon hara (לשון הרע), or ‘slander.’ Tzaraat could appear on a person’s skin, clothing or home. Ramban emphasizes that it is absolutely supernatural for inanimate objects to display signs of illness, highlighting the spiritual nature of this disease. Although lashon hara is a sin not restricted to the Land of Israel, the miraculous spiritual malady of tzaraat could occur only in the land where God’s presence is manifest so clearly. This demonstrates that the spiritual stakes are higher for those who live in the Holy Land. We must always remember that one is held more accountable, and one’s actions have greater significance, in Eretz Yisrael.

As mentioned previously, tzaraat is diagnosed by a priest. The person displaying signs of tzaraat is considered pure until the priest determines that the signs in fact do constitute tzaaraat. The kohen, trained in examining lesions and diagnosing tzaraat, makes his determination by examining the lesion in order to determine whether or not it meets the specifications of tzaraat. If the criteria are not met by the lesion during the initial examination by the kohen, the individual is confined to his home for seven days, pending a follow-up examination (Leviticus 13). Depending on the type of outbreak, a follow up examination may be required.

A groom who exhibits possible signs of tzaraat is exempt from visiting the priest until the eighth day after his wedding for any afflictions on his flesh, garments or house. Similarly, there are no inspections carried out on the days of Passover, Shavuot or Sukkot. The Mishna teaches that these afflictions do not render gentiles impure.

The afflicted remains confined outside of the community until his tzaraat vanishes. Purification is achieved through a ritual described in Leviticus 14. Spring water is placed in an earthenware vessel, over which one of two birds, traditionally recognized as being a sparrow, is slaughtered. The blood of the slaughtered bird is allowed to run into the vessel. The priest then dips the remaining bird and other items (cedar wood, crimson stuff, and hyssop) into the bloodied water and, according to the Mishna (Negaim 14:1), the priest sprinkles the afflicted seven times on the forehead. The identical procedure is performed for a house struck by tzaraat, with the sprinkling done on the lintel. The slaughtered bird is then buried in the presence of the afflicted and the live bird is freed into the open field.

The afflicted washes their garments from impurity and shaves off all their hair. The afflicted then waits for seven days to begin the final steps of his or her purification ceremony (Leviticus 14:8–9). On the seventh day, they again wash the garments that he or she has been wearing from impurity, and again shaves off all of his or her hair. On the eighth day, the afflicted, called a metzora, brings three animal sacrifices to the Temple (or Tabernacle, in its time): a sin offering of a female lamb and a guilt offering and a burnt offering, both of male lambs (Leviticus 14:10).

Blood from the slaughtered guilt offering was placed on the right ear, right thumb and right big toe of the afflicted (Leviticus 14:14). The need for this to be done was cause for some complication, because at this stage, the afflicted was still impure and not allowed into Temple grounds prior to his purification process, and the blood of the offering was not allowed out of the Temple grounds. To reconcile this dilemma, the afflicted stuck these body parts through the gateway one at a time to receive the blood. The same was done with the oil from the flour offerings. The Mishna explains that if the afflicted lost any of these body parts after he was ready for purification, he could never obtain purification (Nega’im 14:9).

The Midrash teaches that tzaraat is the punishment for slander. The Talmud adds other possible sins that result in tzaraat:

It is interesting to note that when Moses first encountered God at the Burning Bush, he requested a sign that he had indeed encountered the God of Abraham, Isaac and Jacob. As a sign, God temporarily afflicted Moses’ hand with tzaraat:

Hashem said to him further, “Put your hand into your bosom.” He put his hand into his bosom; and when he took it out, his hand was encrusted with snowy scales! Exodus 4:6

Moses reveals this to the elders of Israel in Egypt, repeating the sign of tzaraat, and this convinces them that he was indeed sent by God to rescue the Jews (Exodus 4:30).

In another case, Miriam was stricken with tzaraat for her involvement in slandering Moses (Numbers 12:10). Aaron asks Moses to cure her, and Moses prays for his sister. She is cured of the tzaraat but must remain in confinement for seven days. The Torah, however, does not indicate that she went through any purification process similar to what is normally required.

Other later biblical characters who suffered from tzaraat are Naaman, a commander of the Aramean army (II Kings 5:1), and Gehazi, a servant of the prophet Elisha, is punished with tzaraat after taking payment from Naaman though Elisha had refused to accept it. Four men with tzaraat pillage the Aramean camp after it has been abandoned (II Kings 7:3-10). King Azariah, also known as King Uzziah (Chronicles II 26:20-23), also suffered from tzaraat (II Kings 15:5).

Perhaps the most unexpected reference to this affliction is hinted at by Isaiah:

He was despised, shunned by men, A man of suffering, familiar with disease. As one who hid his face from us, He was despised, we held him of no account. Yet it was our sickness that he was bearing, Our suffering that he endured. We accounted him plagued, smitten and afflicted by Hashem; Isaiah 53:3-4

When the Talmud (Sanhedrin 98b) discusses the names of Mashiach, the Messiah, it cites these verses, referring to the Messiah as chivara devei Rebbi, “the leper of the house of Rebbi.” Some commentaries explain that Mashiach will not actually be a leper. Rather, he will be afflicted with great suffering and illness, and, in his merit, God will forgive us and heal us.