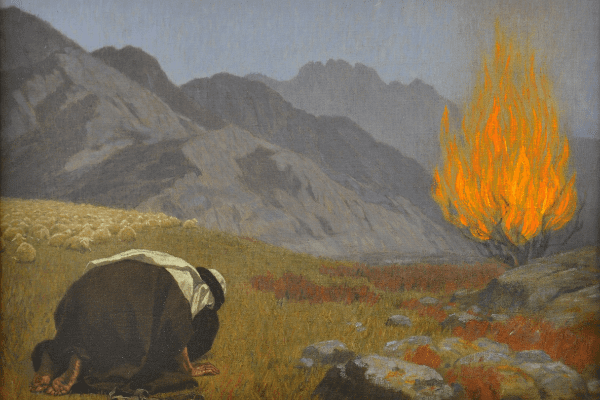 An angel of Hashem appeared to him in a blazing fire out of a bush. He gazed, and there was a bush all aflame, yet the bush was not consumed.

The Burning Bush described in this week’s Torah portion has become the archetypal symbol of the divine call to action. Referred to in theology as a theophany, the bush was the appearance of the infinite God in a form that is visible to man.

The physical manifestation bore messages that could be understood by Man. Rashi explains that the bush was a thorn bush, conveying an implicit message from God that “I am with them [the Israelites] in their affliction.”

Midrash Rabbah explained that Moses had thought to himself that the Egyptians might consume Israel. So God showed him a fire which burned but did not consume, saying to him: “Just as the thorn bush is burning and is not consumed, so the Egyptians will not be able to destroy Israel.”

Midrash Tanchuma relates that when God called out to Moses from the burning bush, he first called to Moses in the voice of Amram his father, so as not to startle him. At that moment Moses rejoiced, saying, “My father still lives.” God said, “I am not your father, but the God of your father.”

Rabbi Yisrael Baal She Tov, the founder of Hasidut, noted that the Torah compares Man to a tree (Deuteronomy 20:19):

“Man is a tree of the field”

More specifically, the Talmud compares the righteous Torah scholars to fruit trees, which bestow beauty, fragrance and nourishment upon the world. The fruit trees also burn—they burn with the ecstasy of their Torah study, with the fervor of their prayer, with the warmth of their good deeds. But theirs is a fire that burns and burns out, a fire that is sated by the words of Torah and prayer and the fulfillment of the divine will. 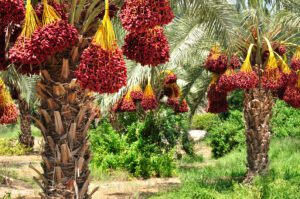 When Moses, the most perfect of men, beheld the heart of flame that smolders within the thorn bush, he was humbled by the sight. “I must turn aside to see this great sight,” he said: I must move from where I am and strive to awaken in myself the insatiable fire of the simple Jew.

This was, in fact, the first time that the word ‘holy’ (kodesh, קודש) is used in the Bible in connection with God. God tells Moses the ground upon which he is standing is holy, leading to God’s command for Moses to remove his shoes. The image and its significance clearly had an impact on Moses’ perception of God, as he reiterated the attribute of holiness after the even more powerful theophany of the Splitting of the Red Sea (Exodus 15:11). In an irreconcilable self-contradiction, the holy aspect of God being manifested in these visions emphasizes the vast gulf separating Man from his creator, as the Hebrew word kodesh literally means ‘separate.’

God’s address from the Burning Bush also marked the first time God referred to the Children of Israel as “my nation” (Exodus 3:7). He then reiterates his nationalist promise to the Patriarchs.

The word for bush, s’neh (סנה) hints at Sinai. Just like the bush, Mount Sinai appeared as a great fire (Exodus 19:18). In this manner, the initial image of the bush on Mount Horeb foreshadowed the giving of the Torah at this same location, which was the culmination of the Exodus from Egypt and provided the guidebook for the Hebrews to live in the Promised Land as God’s Chosen people. 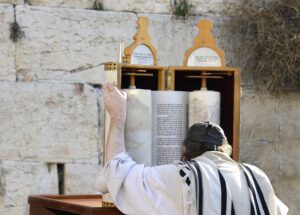 A man reading from the Torah at the Western Wall (Shutterstock.com)