Alien Fire: What Exactly Was the Sin of Nadab and Abihu 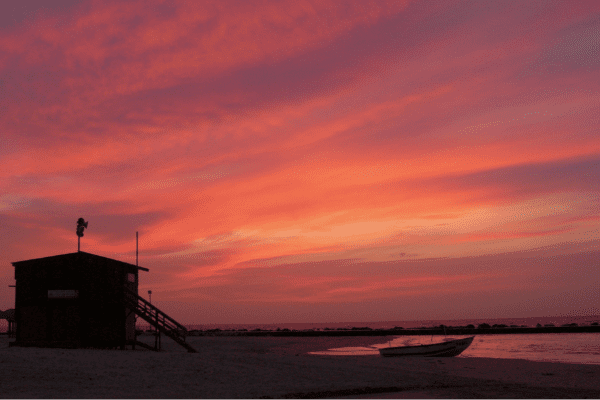 Now Aharon's sons Nadav and Avihu each took his fire pan, put fire in it, and laid incense on it; and they offered before Hashem alien fire, which He had not enjoined upon them.

The Torah describes the death of Nadab and Abihu, the two eldest of Aaron’s four sons, as a punishment for bringing “alien fire, which He had not enjoined upon them” (Leviticus 10:1). The tragedy took place on the eighth day of the inauguration, the first official day of service in the Tabernacle. According to Jewish tradition, this was the 1st of Nissan, 2449, one year after the Exodus. This tragedy turned the joyous culmination of the dedication of the Tabernacle into a day of mourning, while underscoring the dangers involved in attempts to come close to God in ways that He does not mandate. Their deaths came as a shock since they were particularly righteous, as seen when Moses ascended Mount Sinai and God specified that Aaron, Nadab and Abihu, and the 70 elders would also come partway up the mountain and prostrate themselves from afar (Exodus 24). The Midrash describes them as being completely without sin until their deaths. Their deaths were so traumatic that God ordered all of Israel to mourn them (Leviticus 10:6), though Aaron himself, as the High Priest, was forbidden from mourning. 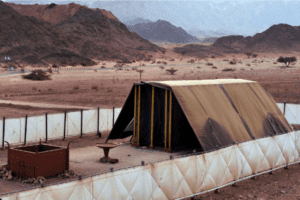 Model of the Tabernacle in Timna Park (Shutterstock.com)

The Talmud (Sanhedrin 52a) describes their deaths as occurring by divine fire entering their nostrils:

Another Midrash explains that the fire burned their souls but left their bodies, and even their clothes, intact.

The corpses had to be removed immediately, because to allow the uncleanliness of the bodies to remain in the sanctuary could invoke God’s wrath again. The bodies were lifted up “by their tunics” to avoid direct physical contact. This did not prevent the carriers from becoming ritually unclean, but lessened the time and procedures needed to restore them to ritual purity.

The term “alien fire” is ambiguous, leading to much conjecture about the precise nature of their sin. Many commentators suggest that their sin of bringing an “alien fire” meant that they brought a fire that they had kindled, rather than using the fire that God had sent. The Talmud (Eruvin 63a) suggests that the two young men ruled that Torah law in fact permitted bringing their own fire to the Tabernacle. Rendering such a decision without consulting with Moses and Aaron, however, was considered disrespectful.

The medieval Biblical commentator Rabbi Shlomo Yitzchaki, know by the acronym Rashi, explains that their sin was entering the Sanctuary while inebriated. The Midrash (Vayikra Rabbah) stated that their sin was remaining unmarried and celibate since they reasoned that they were physically handsome and from a prestigious family.

Another Midrash relates that the two young priests “saw Moses and Aaron walking first, and they behind them, and the Israelites behind them. Nadab said to Abihu, ‘Soon these two old men are going to die, and we will lead the community!’” In an extreme form of divine reproach, God turned the tables on them.

The 20th Century Bible educator and scholar Nechama Leibowitz suggested that theirs was a sin of religious disobedience:

“Their guilt…lay in man’s desire to break through, as it were, to the Almighty and cleave to his Creator not in accordance with the prescribed ordinances, but rather in conformity with the dictates of his own heart,” Leibowitz wrote. ”The acceptance of the yoke of heaven which is the aim of the whole Torah is here replaced by a religious ecstasy which is free from the trammels of normative religious discipline, unrestrained, and un-subservient to the divine will. For this reason they were punished.”

The Israel Bible explains as follows:

The death of Aharon’s sons, Nadav and Avihu, occurs in the midst of the joyous inauguration ceremony of the Mishkan. The Sages explain that they are so moved by the closeness they feel to Hashem at this moment of revelation, that Nadav and Avihu desire to get even closer with an offering of their own which they bring in the Holy of Holies. Though their intentions are pure, the offering is unauthorized and the entry into the Holy sanctuary forbidden, and so they are punished. Their desire for closeness is reflected in Moshe’s words to Aharon, “Through those near to Me I show Myself holy.” Nadav and Avihu are indeed close to God, but this closeness does not allow them to bend the rules. By punishing those who were closest to Him, God’s name is sanctified, as He teaches the important lesson that everyone, even those who are most powerful and respected, must be held to the same standard and follow God’s rules.