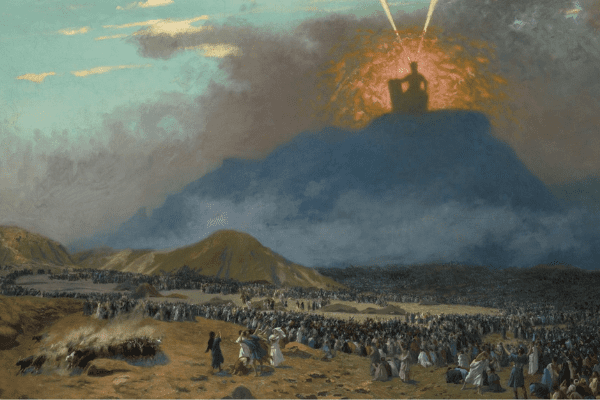 Moshe led the people out of the camp toward Hashem, and they took their places at the foot of the mountain.

The experience at Mount Sinai was an unprecedented revelation of God’s glory that pushed the limits of human perception. This is reflected in the descriptions offered by the sages. When it came time for the people to approach the mountain, the Torah describes it thus:

Moses led the people out of the camp toward God, and they took their places at the foot of the mountain. Exodus 19:17

In this verse, the Hebrew term for ‘foot of the mountain’ is b’tachtit ha’har (בְּתַחְתִּית הָהָר). The literal meaning of this phrase, ‘under the mountain’, inspired a Midrash relating that the mountain was plucked up from its place and held over the Jews like an enormous cask so that they were standing under the mountain itself.

With the mountain looming over their heads, God offered the Jews an ultimatum: “If you accept the Torah, excellent, and if not, this place will be your burial site.”

For this reason, the revelation at Sinai is described as ‘the giving of the Torah’ and not the ‘acceptance of the Torah,’ as it was received through coercion without the expressed agreement of the Jews to receive it. For this reason, Jews do not see themselves as free to accept or reject any of the mitzvoth (commandments). In this respect, Jews are like angels who serve God in an unwavering manner. This is reinforced by the twice-daily recitation of the Shema prayer, accepting the yoke of heaven. God released the Jews from slavery under the Egyptians but He did not set us free. Ownership of the Jews passed to God and we serve him completely. No mortal may intervene or rule over God’s chosen people.

The encounter at Sinai characterizes our relationship with G‑d which is not bounded by reason. It is not dependent upon our understanding of it, or even upon our conscious awareness of its existence. It transcends our conscious self, residing in the very core of our souls.

The sages note that this version of the event is problematic, as any contractual agreement has to be consensual and not coercive. This difficulty is dealt with by noting that in the days of Esther and Mordecai, the Jews actively accepted the Torah, as implied in the verse:

The Yehudim undertook and irrevocably obligated themselves and their descendants, and all who might join them, to observe these two days in the manner prescribed and at the proper time each year. Esther 9:27

It is important to note that God’s name does not appear in the Book of Esther. There is no miraculous salvation as there was in the Exodus from Egypt. The Purim story is entirely about the actions of the Jewish people standing as a united nation against evil. The Jews in Shushan lacked the miraculous divine intervention so evident at Sinai, but their actions were a manifestation of our acceptance of God and His Torah as a nation.

But this coercion at Sinai involved more than the Jews. The Talmud notes the exceptional heh (ה), indicating specificity of a definite article, in the verse in Genesis describing the creation on the sixth day:

And Hashem saw all that He had made, and found it very good. And there was evening and there was morning, the sixth day. Genesis 1:31

This specificity does not appear regarding any of the other days.  The Talmud explains:

This teaches that the Holy One, Blessed be He, established a condition at the time of Creation, saying to all of His Creation: If Israel accepts the Torah on the sixth day of Sivan (Shavuot, the holiday on which the Torah was given at Sinai), you will continue to exist; and if they do not accept it, I will return you to the primordial state of chaos and disorder. Therefore, the earth was afraid until the Torah was given to Israel, lest it be returned to a state of chaos. Once the Jewish people accepted the Torah, the earth was calmed.

In the days to come, The Mount of Hashem‘s House Shall stand firm above the mountains And tower above the hills; And all the nations Shall gaze on it with joy. And the many peoples shall go and say: “Come, Let us go up to the Mount of Hashem, To the House of the God of Yaakov; That He may instruct us in His ways, And that we may walk in His paths.” For instruction shall come forth from Tzion, The word of Hashem from Yerushalayim. Isaiah 2:2-3