The Shewbread: A Reminder That God Provides Our Physical Sustenance 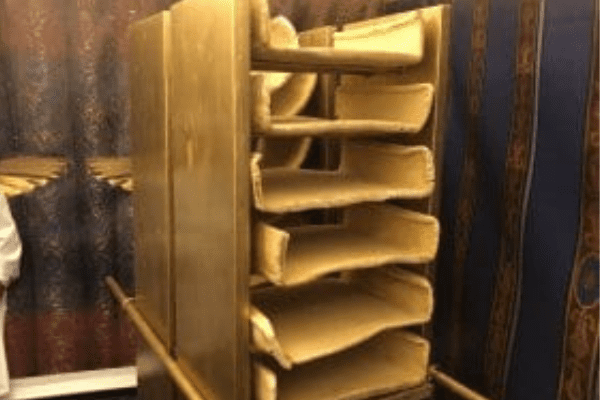 He shall arrange them before Hashem regularly every Shabbat day—it is a commitment for all time on the part of the Israelites.

By the time we read the Torah portion of Emor (Leviticus 21–24), the Tabernacle has been built along with all of its necessary utensils. The Kohanim (priests) stand at the ready in the Biblically mandated clothes. But some necessary elements are still missing. God, therefore, commands the Children of Israel to prepare the shewbread (lechem hapanim), or showbread, and arrange it on the Table inside the designated holy area, on the northern side of the chamber, just outside the screen of the Holy of Holies, opposite the Menorah with the altar of incense between them.

You shall take choice flour and bake of it twelve loaves, two-tenths of a measure for each loaf. Place them on the pure table before Hashem in two rows, six to a row. With each row you shall place pure frankincense, which is to be a token offering for the bread, as an offering by fire to Hashem. He shall arrange them before Hashem regularly every Shabbat day—it is a commitment. They shall belong to Aharon and his sons, who shall eat them in the sacred precinct; for they are his as most holy things from Hashem‘s offerings by fire, a due for all time. Leviticus 28:5-9

The shewbread is described as twelve cakes baked from fine flour, arranged in two rows on the Table. As all of the grain offerings were unleavened except for the two loaves brought on Shavuot (Feast of Weeks), it is assumed that the shewbread was also unleavened.

Frankincense (levona, לְבֹנָה) was one of the eleven ingredients of the incense and for the purposes of the shewbread, was mixed with salt.

Unlike the grain offerings which are brought periodically, the shewbread stood in the Tabernacle at all times (Exodus 25:30).

Just as Aharon arranges the candles of the Temple menorah (Numbers 8:2-3), he is to arrange the twelve loaves of bread every Shabbat as a “commitment for all time.” On the day that the Children of Israel desist from activities related to earning their livelihood and focus instead on their relationship with the Almighty, Aharon sets the bread before Hashem, reflecting the understanding that it is He who ultimately provides mankind with their physical sustenance. Both the menorah and the lechem hapanim (לחם הפנים) ‘bread of display,’ or ‘shewbread,’ are a constant presence in the Beit Hamikdash. The light of the lamp symbolizes the spiritual life of the people, while bread symbolizes the physical realm. When the People of Israel rest on the Shabbat and focus on matters of the soul, God ensures that their physical well-being will be taken care of as well.

The cakes were displayed on the table for a week. Miraculously, despite sitting out for an entire week, they never became moldy or dried out. Every Shabbat, the previous loaves were replaced with fresh loaves. Every Friday, a new group of Kohanim (priests) arrived to take their turn in the Temple Service. On Shabbat afternoon, the outgoing and incoming Kohanim would sit for a meal, eating the old shewbread in a holy place inside the Temple. 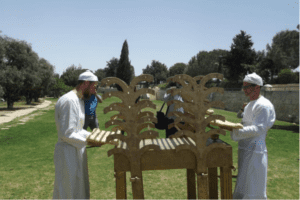 Three times a year, when the children of Israel made the pilgrimage to the Holy Temple—on Passover, Shavuot and Sukkot—they were shown the table and the shewbread. “Look at how beloved you are by G‑d!” the Kohanim (priests) would tell them, pointing to the showbread.

An unusual exception to this rule of the shewbread being eaten by the Kohanim (priests) was described in the Book of Samuel (I Samuel 21:4–6) when Ahimelech the priest gave David the shewbread, at his request.

The Book of Chronicles recorded that the clan of Kohath, one of the four main divisions of the Levites, was responsible for preparing the shewbread. Its preparations was a closely guarded family secret.

With “horns” at each corner (similar to the altar), Rabbi Chanina described the loaves as looking  “like an open ark,” but according to Rabbi Yochanan, they looked “like a dancing ship” (Talmud Menachot 93b).

The Mishnah describes that the loaves were kneaded separately but baked in pairs. It describes them being shaped in three different molds. Maimonides states that the molds were made from gold. One mold was used while the loaves were just dough, another while the bread was being baked in the oven, and a third after baking, to protect the shape. The measurement given for each bread (2/10 of an ephah) is approximately 4.9 pounds. The Mishnah describes the loaves as being 10 Etzba (fingerbreadth) long, and 5 Etzba wide, with “horns that were 7 Etzba long. Each Etzba is .79-.94 inches. The shewbread was prepared inside the Temple and had to be baked quickly so they wouldn’t become chametz (leavened).

The Talmud (Yoma 38a) relates that in the times of the Temples, the Garmu family were experts at preparing the shewbread. The sages asked them to teach other people the secrets of preparing the shewbread, but they refused and were fired. Specialists were brought from Alexandria, Egypt, who knew how to bake, but they did not know how to take the loaves from the oven as well as the Garmus did, and in spite of their many attempts, their loaves became moldy. The Garmus were summoned back to their job, and the shewbread was once again offered. When they were asked why they wouldn’t teach anyone else how to do the work, they said, “We know that the Temple will be destroyed, and we are concerned that an unworthy man will learn how to bake the shewbread and use it to serve an idol.”

In addition, the Garmu family was known to be honest. The shewbread was made from clean flour that had been sifted many times. The family never ate bread made from fine flour, only simple, rough bread, so that no one would suspect them of using the shewbread flour for their own meals.