The Incense Altar: Linking the Physical and the Spiritual 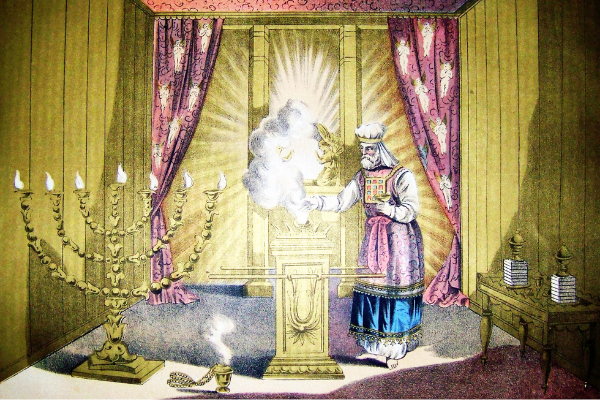 You shall make a mizbayach for burning incense; make it of acacia wood.

After instructing the Children of Israel about the priestly garments, God then describes the golden altar for offering incense. Similar to the Ark of the Covenant, the altar for the incense was made of acacia wood covered in gold. Rings were set in its corners and staves were inserted for transporting the altar. 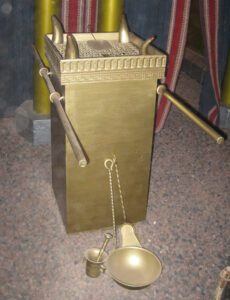 A replica of the incense altar in Timna Park (Shutterstock.com)

Oil and incense gladden the heart, And the sweetness of a friend is better than one’s own counsel. Proverbs 27:9

The incense was an essential element of the Temple service and was considered a sacrificial offering burned twice daily. On Yom Kippur, the Day of Atonement, the Kohen Gadol (High Priest) would insert a pan of burning incense into the Holy of Holies before entering, waiting until the area was full of fragrant smoke.

The incense, or ketoret in Hebrew, was composed of 11 spices, four of which are explicitly mentioned in the Torah, and the rest of which were communicated orally to Moses and are part of the Oral Tradition. These included 70 maneh each of balsam oil (צרי), onycha (הצפורן), storax (חלבנה), and frankincense (לבונה). To this were added 16 maneh of musk (מור), cassia (קציעה), spikenard (שבולת נרד), and saffron (כרכום), 12 maneh of costus (קושט), 3 maneh of (קלופה) cinnamon, and 9 maneh of (קנמון) agarwood.  Sodom and Jordanian amber were also added. Another two ingredients (vetch lye and “caper wine”) were used in preparation of the tziporen (onycha) spice.

Each maneh weighed five pounds. The total weight was 368 maneh, one measure for each day of the year (half offered in the morning, and half in the evening, plus 3 extra for Yom Kippur), or 1,840 pounds.

There was also a special herb, referred to simply as maaleh ashan (“makes smoke rise”), that would produce a pillar of smoke that rose straight up rather than spread out. The identity of the herb was a secret that was closely guarded by members of the Avtinas family, who made the incense for the Second Temple based on the tradition of their ancestors. This herb had to be placed in the incense even though it did not have any fragrance.

The Torah forbids recreating or burning the incense for secular use outside of the Temple.

The incense also was used as a remedy against a plague, as seen after the congregation of Israel was struck with a plague after the sin of Korah and his cohorts (Numbers 17). Aaron passed among the people with a pan of incense and stood “between the living and the dead,” and the plague was halted.

The Talmud relates that all of the priests wanted to perform the incense offering, as doing so brought blessings of wealth. It was decided that as many different priests as possible should have an opportunity to do this service, so no priest was assigned this task more than once in his lifetime.

The midrash states that whoever smelled the fragrance of the incense when it was being burned on the altar would have thoughts of repentance. His heart would be purified of all evil thoughts and from the defilement of the Evil Inclination. It goes on to explain that all of the senses were blemished by the sin of eating the forbidden fruit in the Garden of Eden except for the sense of smell. It is, therefore, impossible to sin by smelling. Thus, the incense was an offering that was entirely clean of even the tiniest tinge of sin.

The Maimonides wrote that the incense was used to offset the overpowering smell of death and burning flesh that was so pervasive in the Tabernacle.

In 1992, Vendyl Jones and his team discovered 600 kilos of “reddish-brown organic substance” in a carefully sealed rock silo in a part of the Qumran cave complex. Subsequent analysis determined that this substance contained traces of at least eight of the eleven spices that were used in the manufacture of the ketoret. 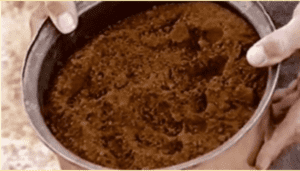 A stash of ketoret found at Qumran (courtesy of Vendyl Jones)

In 1994, the incense spices were presented to the now late Rabbi Yehudah Getz, late Chief Rabbi of the Western Wall. A sample was also given to Rabbi Ovadiah Yosef. Rabbi Ovadiah had a chemist analyze the mixture to confirm its organic nature. Then both rabbis requested that Vendyl Jones “burn” some of the incense for scientific purposes. As it is forbidden to do so with fire, they used hydrochloric acid. At their suggestion, he had the spices combined together with the sodom salt and karshina lye that was also found stored separately in the cave in Qumran.

The results were astonishing according to all accounts. Although the spices had lost some of their potency over the two millennia since their burial, it was still powerful. The residue of its fragrance lingered in the vicinity for several days following the experiment. Several people present reported that their hair and clothing retained the aroma.