A Table Fit for a King 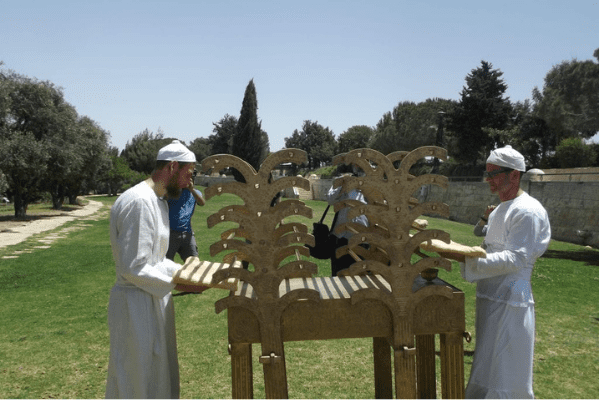 You shall make a table of acacia wood, two amot long, one amah wide, and an amah and a half high.

When God commanded the Children of Israel to build a Tabernacle for him to dwell among them, he also commanded them to build furnishings. Perhaps the most intricate piece was the golden table, or shulchan, that held the 12 showbreads, and some commentaries place the table as second in importance only to the Ark of the Covenant.

Unlike the candelabrum, or menorah, that was one huge piece of beaten gold, the golden table had some components made from acacia wood, or shittim, covered in gold, with other elements made from pure gold. The shulchan was a golden framework with twenty-eight gold semi-round half-rods that composed the shelves on which ten out of the twelve loaves sat (two loaves sit on the table itself). The shulchan was crowned with a double row of golden trim. On the table were two golden spoons filled with frankincense. The shulchan was placed on the left of the Kohen Gadol (High Priest) as he entered the Holy of Holies, with the golden altar for the incense in the center, and the menorah on the right.

Place the table outside the curtain, and the menorah by the south wall of the Mishkan opposite the table, which is to be placed by the north wall. Exodus 26:35

Commentaries explain that the menorah represents the Torah, with all the stress on purity and the symbolism of lighting up the world, its essence being intangible and spiritual with a tenuous connection to the physical world. The showbread teaches that the physical world is not to be neglected or rejected, but should be dedicated to the glory of God. Or, as the Mishna (Avot 3:21) teaches, “If there is no flour, there is no Torah.”

Other commentaries explain that the shulchan represented that it was not only our spiritual aspects that were presented before God, but our actions in the material world (i.e. how we conducted business) as well.

The analogy comparing the Tabernacle to a home is brought in the Midrash which states that the shulchan was meant to represent the dining hall of Hashem’s earthly palace, with the altar representing the kitchen where the king’s meal is prepared. The commentaries are careful to emphasize that these comparisons are for the benefit of Man. God certainly does not need an earthly dwelling, but the physical Tabernacle helped Israel visualize God’s presence in the world.

In this analogy, the courtyard of the Tabernacle was where the public could greet the king, whereas the area inside the tent, designated as Holy, was His private domain and only for family. The Holy of Holies was like his innermost chamber where only the High Priest may enter once a year.

According to Abarbanel, the Ark symbolizes the Torah, while the three vessels of the Outer Sanctum represent the rewards promised to those who follow its laws.  The table stands for physical blessings, the menorah for wisdom and intellectual gifts, and the incense altar for spiritual rewards.

Other commentaries say the double crown represents the dual responsibilities of a king; to provide for the nation’s livelihood and to protect them from enemies.