The Hidden Haftorah: Elisha’s miracle of the loaves and healing leprosy 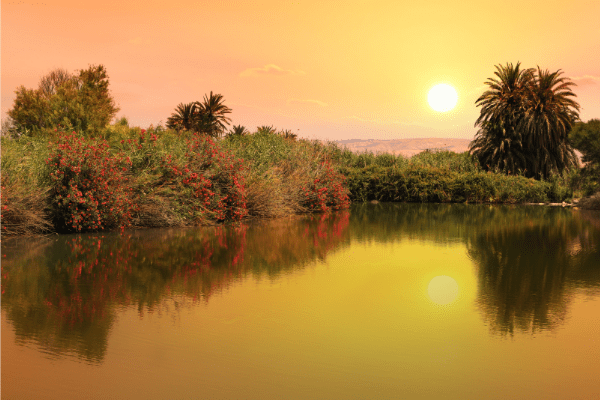 Elisha sent a messenger to say to him, “Go and bathe seven times in the Yarden, and your flesh shall be restored and you shall be clean.”

The portion of the Torah called Tazria (Leviticus 12–13) is accompanied by the reading from II Kings 4:42-5:19. Despite being assigned to this Torah portion, it is rarely read. In most years, the portions of Tazria and Metzora (Leviticus 14–15) are read together, and only the haftarah for Metzora is read. In leap years, Tazria is read by itself. But even so, it often coincides with the Shabbat before the month of Nisan on which a special portion concerning the Passover offering and the command to keep a calendar is read, along with a special corresponding haftarah. So, the haftarah for the portion of Tazria is quite special; normally hidden, but always waiting to be revealed.

The haftarah begins with a brief description of a miracle performed by the prophet Elisha. From a gift of twenty loaves of barley bread and a sack of grain, Elisha was able to feed one hundred students. The food was enough to feed all of them with some leftovers.

The Israel Bible, explaining an earlier miracle performed by Elisha, brings a beautiful quote from David Ben Gurion to explain the modern significance of miracles:

God again performs a miracle with human partnership, utilizing items that already exists in nature. Thus, this miracle emanates from existing oil, and continues only as long as additional jugs are brought. David Ben Gurion, the first Prime Minister of Israel, famously said “in Israel, in order to be a realist, one must believe in miracles.” Indeed, surrounded by enemies and lacking natural resources, there is no logical reason that the State of Israel exists at all, let alone as a strong and vibrant nation. It is only due to Hashem’s miracles, which He attaches to the great efforts of many human beings, that Israel is here to bring blessing to the world.

The haftarah then continues with a description of how Elijah miraculously cured Naaman, an Aramean general, of his tzaraat. This relates to the Torah portion of Tazria which describes this spiritual malady in-depth.

After contracting tzaraat, Naaman is told by a young captive Israelite maid to seek the assistance of the “prophet in Samaria.” Acting on this suggestion, the king of Aram dispatched a message to the king of Israel, “Behold I have sent Naaman my servant to you, and you shall cure him of his tzaraat!” Against the protestations of the king of Israel, Elisha agrees. He advised Naaman to immerse himself in the Jordan River. Despite his initial reluctance to do so, Naaman carried out the prophet’s orders and was immediately healed.

Elisha refused to accept any gifts from Naaman. The general promised Elisha that he would no longer serve any deity other than the One God of Israel, and he departed.

The story emphasizes that the land of Israel itself produces miracles, as explained in The Israel Bible:

Previously (Joshua 3), the Yarden river split to allow the Children of Israel to cross into Eretz Yisrael. Now, the Yarden is again part of a miracle, as it cures Naaman of his affliction. The Land of Israel has amazing powers to provide spiritual, emotional and physical healing. The Sages teach (Bava Batra 158b) that Israel’s very air makes one wise, and the sprouting of its fruits heralds redemption. The miracles of Israel are all-encompassing. Sometimes we do not perceive them, or perhaps do not merit an individual miracle. But if one is spiritually attuned, it is possible to appreciate the many miracles God performs in the Promised Land each and every day.

Even the episode of the barley loaves is best understood when viewed in the context of the land.  Rashi explained that it took place “during Passover when the grain ripens.” In this instance, the haftarah is also connected with the time of year. The story acts as a prelude to the barley Omer offering that was brought in the Temple, starting a period of counting that culminated with the two loaves of wheat brought on the holiday of Shavuot, seven weeks after Passover.