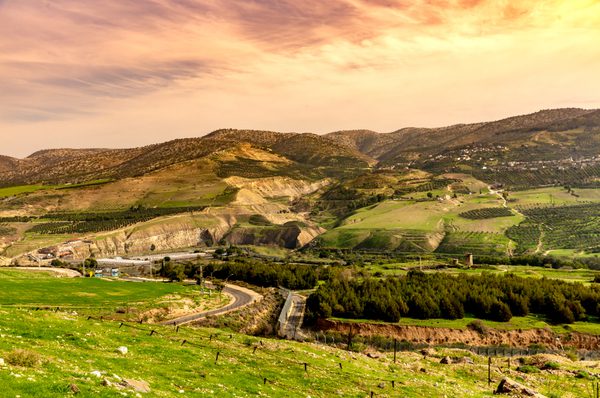 Joshua chapter 12 summarizes the wars fought by the Children of Israel to take possession of the Promised Land. In this chapter, we are also reminded of the wars that Moses fought before the Children of Israel crossed over the Jordan River. Moses led the people against Sihon king of the Amorites and Og king of the Bashan, and captured their lands: the Gilead and the Bashan. This area became the inheritance of the tribes of Reuben and Gad and half of the tribe of Manasseh after Reuben and Gad requested it as their inheritance.

At first, Moses was reluctant to allow them to settle in the land on the eastern bank of the Jordan River instead of settling in the Land of Israel proper. In his eyes, they were rejecting the land given to them by God, and he feared that they would influence others to also refrain from crossing into the Land of Israel. He wondered: Have they learned nothing from the sin of the spies?

Moses acquiesced only when he became convinced that the request stemmed neither from a rejection of God’s land, nor from a desire to be relieved of the long and hard upcoming struggle to conquer the Promised Land. The mistake of rejecting the Promised Land had already been made by the previous generation, and the people suffered the consequences. Their children had learned not to make the same mistake again. In addition, they promised that they were not trying to get out of the war to inherit the land and agreed to lead their brethren in the battles. Instead, the tribes of Reuben and Gad desired to settle the lands of Gilead and Bashan because these lands were very fertile and rich in pasture. These tribes had more livestock than the other tribes (Numbers 32), and they therefore desired to settle in these lands.

Indeed, the plains of Bashan were considered among the richest lands in biblical times. We are told about their richness and beauty in other places in the Bible. Ezekiel, for example, mentions the fat cattle that are found in the rich pastures of Bashan (Ezekiel 39:18), Isaiah references the oak trees of the forests of Bashan (Isaiah 2:13), and we find mention of its majestic mountains in the Book of Psalms (Psalm 68:16).

Rabbi Menachem Mendel Schneerson wonders why Moses gave some of the land inherited from Sihon and Og to half of the tribe of Manasseh if only the tribes of Reuben and Gad requested it as their inheritance. He explains that Moses gave the land to half of the tribe of Manassed in order to start the process of expanding Israel’s borders. Once these tribes settled in this land, it became a beautiful and integral part of the Land of Israel.

Not only was the land of the Gilead and Bashan important in ancient Israel, it is an essential part of the Land of Israel today. The area of biblical Bashan is now known as the Golan Heights, an area which Israel conquered in the Six Day War from Syria. Towering over the north of the country, the Golan Heights provides an essential strategic perch that is vital for Israel’s security. Coupled with its biblical significance, the Golan Heights remain an important part of the State of Israel. In his final interview before suffering a massive stroke in 2006, Prime Minister Ariel Sharon told Japanese reporters, “I am a Jew, and that is the most important thing for me. Therefore when it comes to the security of Israel I will not make any compromises…I don’t see any situation where Israel will not be sitting on the Golan Heights.”