Shavuot: Receiving the Torah and Saving the World 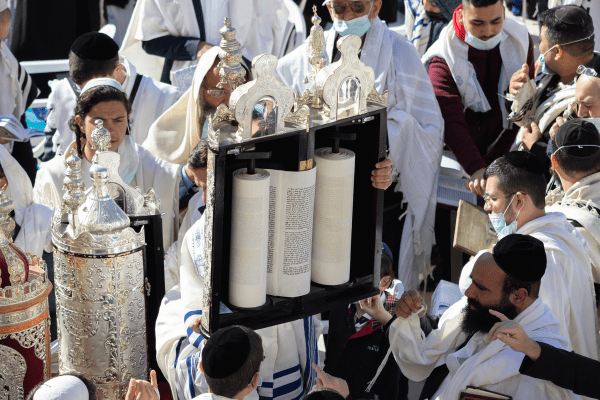 Moshe led the people out of the camp toward Hashem, and they took their places at the foot of the mountain.

The definite article is added to the sixth day at the completion of the Creation to say that the entire creation was conditional on whether Israel would receive the Five Books of Moses [the definite article is represented by the Hebrew letter hey (ה) whose numerical value equals 5]. Or, alternatively everything that God created was conditional on the sixth day of Sivan when Israel received the Torah.

The Talmud (Shabbat 88a) further elaborates on this theme, citing the verse in Exodus that describes that sixth day of Sivan after the Exodus from Egypt:

Moshe led the people out of the camp toward Hashem, and they took their places at the foot of the mountain. (Exodus 19:17).

The Hebrew word b’tachtit  (בְּתַחְתִּית), is translated here as “at the foot of,” literally means the bottom or underside. Understood literally, this verse means that the Children of Israel were in, or under, the base of the mountain. The Talmud comments on this possible scenario:

Rav Avdimi son of Hama son of Hasa said, “This teaches us that The Holy One, Blessed be He, suspended the mountain over them as a vat and said to them, ‘If you accept the Torah, good. But if not, there will be your burial place.’”

Rabbeinu Tam, in his commentary on this section of the Talmud, explains that this description should not be taken literally. The people were forced to accept the Torah, not in the sense that someone was holding a gun (or a mountain) to their heads, but in the sense that it was completely obvious to them that that was the right thing to do. The attendant miracles had made it absolutely clear that their existence, and the existence of the entire world, were dependent on the Torah that they were being offered that Shavuot.

We were not given much of a choice, and the implications were global, as all of Creation stood in balance. It is as if to say that even though the process of Creation was finished on the archetypal sixth day, Creation was not complete or fulfilled until the sixth day that came thousands of years later when the Torah was given to the Jews and, through them, to the rest of mankind. It was not enough for the world to physically exist and to operate as a finely tuned, divinely operated, system of perpetual motion. Creation wasn’t complete unless Man received the Torah and related to Creation as means of serving God.

At Sinai, it is made graphically clear that neither Israel nor the world as a whole can continue to exist without Israel’s acceptance of the Torah. In a very real sense, the world’s continued existence is entirely dependent on the eternal covenant, expressed in the Jews observance of the Torah commandments in the land of Israel.

The Yehudim undertook and irrevocably obligated themselves and their descendants, and all who might join them, Esther 9:27

In the story of the Jews in Shushan, there were many surprises but no dramatic miracles. Divine intervention  was present but unseen. The name of God is not mentioned in the Book of Esther, and the salvation of the Jews came about through natural means and their own efforts. God remained behind the scenes. The name “Esther” is derived from the word “nistar”, meaning “hidden”. The acceptance of the Torah on Purim was a result of free choice. No mountains hung over our heads and no threats were required.