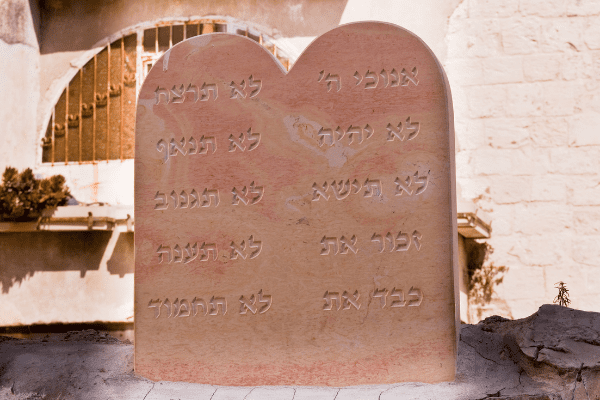 Then he took the record of the covenant and read it aloud to the people. And they said, “All that Hashem has spoken we will faithfully do!”

The Israel Bible explains how this bond with future generations is expressed in the twelve pillars set up at Sinai:

If the Twelve Tribes are physically present at the foot of the mountain, what is the meaning behind the symbolic representation of the tribes through the twelve pillars erected by Moshe? Commentators reflect that these pillars are meant to represent all future descendants of the nation alongside the generation that exited Egypt. Based on this verse, the Sages of the Midrash teach that, in a sense, all the future souls of the Jewish nation were present at Sinai; they too witnessed the revelation of God and personally accepted the Torah and its laws upon themselves.

The Torah is not a guidebook for individual spirituality, rather it was given to the entire nation. It was at this juncture, when the Children of Israel accepted the Torah at Sinai, that they became God’s chosen nation. This is expressed in glowing terms:

Now then, if you will obey Me faithfully and keep My covenant, you shall be My treasured possession among all the peoples. Indeed, all the earth is Mine, but you shall be to Me a kingdom of priests and a holy nation.’ These are the words that you shall speak to the children of Yisrael.” Exodus 19:5-6

It should also be noted that the covenant with Abraham was unconditional and no responsibilities were expressed. In the covenant at Sinai, Israel promised to follow the commandments and the consequences for non-compliance were dire. The Jews were instructed at Sinai that as part of the covenant, they bore the consequences of their sins, collectively and as individuals. 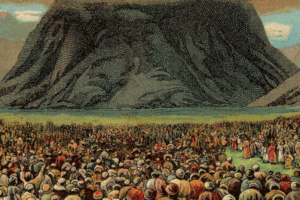 The Israelites gathered at Mount Sinai

Rabbi Jonathan Sacks, former chief rabbi of the United Kingdom, explained the significance of the group revelation: “It created certainty and removed doubt” Rabbi Sacks wrote. “The authenticity of a revelation experienced by one person could be questioned. One witnessed by millions could not. God disclosed His presence in public to remove any possible suspicion that the presence felt, and the voice heard, were not genuine.”

This obligation to perform the commandments is clearly expressed in what is essentially a reiteration of the Sinai covenant (Deuteronomy 11:13–21). This reiteration is recited twice-daily as part of the foundational prayer, the Shema. This passage declares that as long as Israel is faithful to God it will be blessed with ample crops, but should it follow other gods the land will not support it.

Judaism asserts that the Mosaic covenant was presented to the Jewish people and converts to Judaism. It does not apply to Gentiles, with the notable exception of the Seven Noahide Laws which apply to all people.