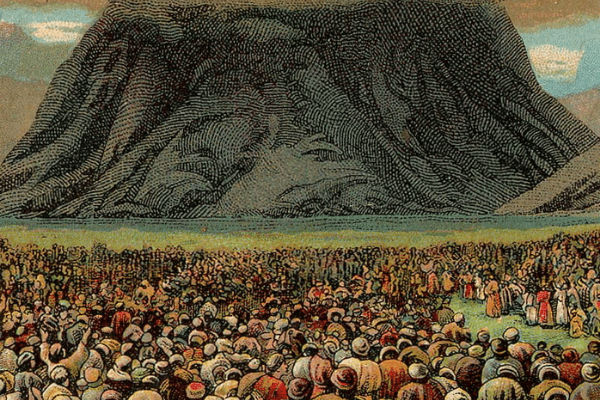 All the people answered as one, saying, “All that Hashem has spoken we will do!” And Moshe brought back the people's words to Hashem.

When Moses presented the Jews with the prospect of receiving the Torah at Sinai, they respond: “All that Hashem has spoken we will do!” (Exodus 19:8). This expression of acceptance was repeated and expanded in a phrase that has characterized Jewish observance since that time, na’aseh v’nishmah (נַעֲשֶׂה וְנִשְׁמָע), “All that Hashem has spoken we will faithfully do!” (Exodus 24:7). This phrase implies an unconditional, unquestioning acceptance of the Torah and a pledge to perform its precepts, as it places the word na’aseh, we will do, before nishmah, we will hear.

Biblical commenters invoke the principle that the Torah is not necessarily written in a chronological manner, claiming that the phrase of acceptance, na’aseh v’nishmah, was declared before the Jews received the Torah, even though it is written afterwards. This faithful acceptance was a powerful sign of the worthiness of the Jewish people to receive the great gift of the Torah.

This unconditional acceptance is especially important as the rabbis divide the Torah commandments into two categories: chukim (laws that transcend human understanding) and mishpatim (judgments, or laws that “make sense”). Were the Jews to accept the Torah based on their individual intellect and ability, the chukim would have been neglected.

In traditional Jewish culture, the statement “na’aseh v’nishmah” has come to epitomize the Jewish commitment to the Torah. It has come to mean that Jews perform the mtizvot (commandments) as the sages have explained them, even before studying the reasons and methodology behind them. But the vow also includes the intention to continue to learn about the mitzvot even after committing to observe them. Implicit in this method is the belief that performing the mitzvot is part of the learning process, endowing a deeper understanding of what is written in the Torah. It has the additional benefit of allowing the performance of the mitzvah despite the myriad intricacies of the law. But it also means that learning about the mitzvot leads to an even deeper understanding and appreciation for God’s commandments.

According to some commentators, the words na’aseh v’nishmah indicate an acceptance not only of the immediate laws of the Torah, but also of all of the future rabbinically mandated mitzvot.

As the Jews accepted the Torah as a nation, this precept unifies us in our actions for all time in absolute servitude to the God of Israel. In that sense, this form of acceptance places Israel on the level of the angels, as stated in Psalms 103:20-21:

According to the Talmud (Shabbat 88a), the Jewish people received crowns for preceding the word “na’aseh” (we will do) to the word “nishma” (we will hear), implying that first and foremost they were committed to keeping the commandments, and only afterwards would they delve into understanding them. 600,000 angels crowned every Jew with two crowns: one for “na’aseh” and one for “nishma”.

In this phrase na’aseh v’nishmah, deed precedes understanding, or, as the Sefer HaChinuch explains, “The heart follows the actions a person does.” The Midrash, however, explains that understanding is also important in order to strengthen our observance of the laws:

“‘And they [the Children of Israel] said, “all that God has said we will do and we will hear,”‘ since they had initially prioritized doing. Moses said to them, ‘Is doing possible without understanding? Understanding brings one to doing.’ They then said, ‘We will do and we will understand,’ [meaning] ‘We will do what we understand.’ This teaches that the people said ‘na’aseh v’nishma’ before receiving the Torah” (Mekhilta d’Rabbi Shimon bar Yochai 24:7).

The Talmud (Kiddushin 40b) explains the relationship between deeds and knowledge by saying that “study is great, for it leads to action”

The Midrash compares the conversion of Ruth the Moabite to the faithful acceptance of the Torah by the Jews at Sinai. The Midrash relates that when Ruth expressed her intention to stay with her mother-in-law and become part of the Jewish people, Naomi began to explain the mitzvot and all they entail. Ruth stopped her and insisted that at that moment, even before knowing the laws, she would be a faithful servant of the God of Israel. 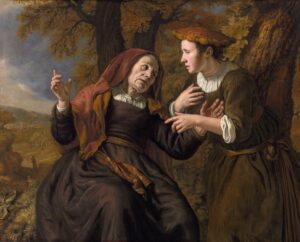