Locusts: Past, Present, and Future 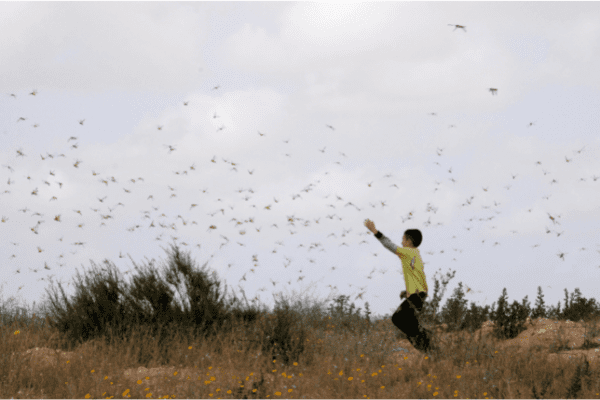 The eighth plague brought an unprecedented swarm of locusts into Egypt, a swarm that devoured every shred of grain and foliage that remained after the hail. The plague was so devastating that Pharaoh relented, openly repenting and begging that Moses and Aaron petition God on his behalf. But after a strong east wind blew the locusts into the Reed Sea, God strengthened Pharaoh’s heart and he reneged.

God promised that a plague of locusts of the magnitude that hit Egypt will never be seen again (Exodus 10:14), yet if any of the plagues are making a comeback it is the locusts. Africa has been hit by a multi-year swarm that has the continent on the verge of famine. Swarms are often tens of square kilometers in size.  A swarm of just one square kilometer eats the same amount of food in one day as 35,000 people. The swarms can also travel 93 miles a day, making efforts to control an outbreak even more difficult. Officials warned that further rains in the region could lead to an even larger outbreak.

According to Jewish tradition, the ten plagues will reappear before the Messiah, as prophesied by Micah (Micah 7:15).

I will show him wondrous deeds As in the days when You sallied forth from the land of Egypt.

Jewish sources predict that all of the plagues will reappear in the final redemption but in even more powerful forms. It is written in Midrash Tanchuma, homiletic teachings collected around the fifth century, that “just as God struck the Egyptians with 10 plagues, so too He will strike the enemies of the Jewish people at the time of the Redemption.”

This concept was explained by Rabbi Bahya ben Asher, a 13th-century Spanish commentator, who wrote, “In Egypt, God used only part of His strength. When the final redemption comes, God will show much, much more of His power.

Though normally eating bugs is a distinctly anti-kosher dietary option, locusts are the notable exception (Leviticus 11:22-23):

For religious Jews, grasshoppers represent a flexible protein as it is classified as pareve, neither meat nor dairy. As such, they can be eaten with either dairy or meat.

An Israeli startup called Hargol is using high-tech farming to create this “Biblical protein” in a manner that may solve world hunger to the delight of both environmentalists and Biblical scholars alike. Grasshoppers are already the most popular insect eaten by humans, with 2.5 billion in Asia, Africa, and Central America. In some countries, grasshoppers are considered a delicacy and sold for exorbitant prices due to the short seasons during which the insect can be harvested in the wild. But Hargol is the first company that has succeeded in raising the insect.