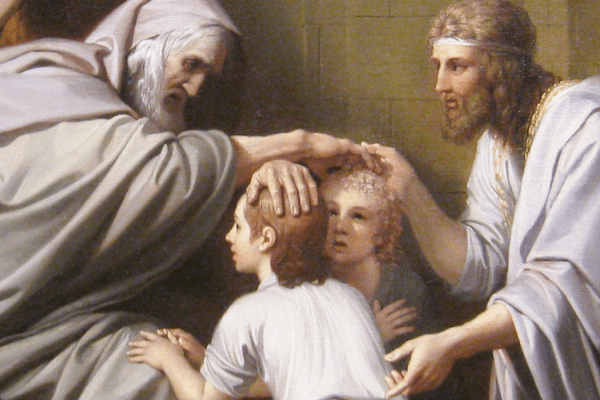 The Angel who has redeemed me from all harm—Bless the lads. In them may my name be recalled, And the names of my fathers Avraham and Yitzchak, And may they be teeming multitudes upon the earth.”

More than any other character in the Bible, Jacob encounters angels. In his nighttime vision after fleeing Esau, Jacob sees angels ascending and descending a ladder to heaven. Upon returning, he has a far more direct encounter with an angel, wrestling with the angel of Esau. 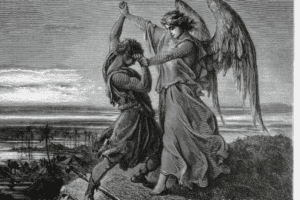 Jacob wrestling with an angel

So it is entirely characteristic that while blessing Ephraim and Manasseh before his death, Jacob invokes “the Angel who has redeemed me from all harm,” calling on him to “bless the lads” (Genesis 48:16). The blessing is considered so loving that this Torah verse has been transformed into a lullaby sung to Jewish children throughout the generations.

It should be noted that the Biblical concept of redemption is not exactly ‘to set free.’ Redeeming is more closely defined as recovering an object that has been lost or taken away, something to which one had a previous claim through family relation or possession. This can imply buying back, as in a field, or releasing from a debt.

It should also be noted that a malach can be understood to be a heavenly angel (Genesis 22:11), though it literally means ‘a messenger.’  Rabbi Chaim ibn Attar, an 18th century Moroccan commentator known as the Ohr HaChaim, suggested that in the verse, Jacob is not requesting divine intervention in the form of an angel, rather Jacob is simply referring to God’s intervention in the world as a malach, or angel.

On the other hand, Rabbi Ovadia ben Jacob Sforno, a 16th-century Italian Biblical scholar, explained that Jacob was requesting that the angel who had saved him in the past intervene on behalf of Ephraim and Manasseh should they not merit redemption.

“We should never take our livelihood for granted,” Rabbi Weiss taught in his book Siach Yaakov. “Our eyes should always turn to Hashem Who provides the food of all flesh at its appropriate time.”