Why do we bless our children to be like Ephraim and Manasseh? 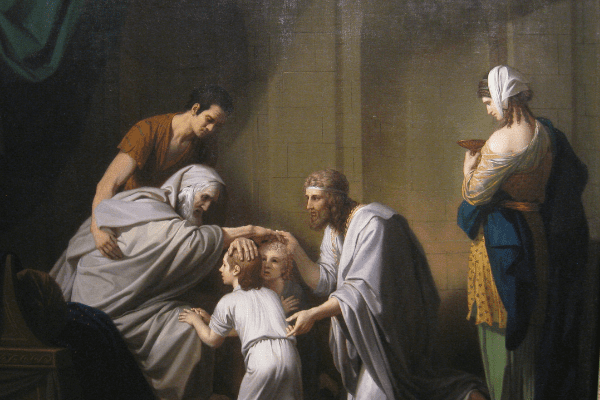 So he blessed them that day, saying, “By you shall Yisrael invoke blessings, saying: Hashem make you like Efraim and Menashe.” Thus he put Efraim before Menashe.

The Torah portion of Vayechi (Genesis 47:28–50:26) tells of the end of Jacob’s life. He lives the last 17 years of his life in Egypt. When he is about to leave the world, Joseph brings his two sons, Ephraim and Manasseh, to his father to be blessed. As part of the blessing, Jacob says that all future generations will bless their children to be like Manasseh and Ephraim (Genesis 48:20):

By you shall Yisrael invoke blessings, saying: Hashem make you like Efraim and Menashe.”

This is acted out every Shabbat evening when fathers bless their children. Fathers reface their blessing of their sons by invoking the verse, “May Hashem make you like Ephraim and Menashe” (Genesis 48:20). This is in contrast to the blessing of the daughters which invokes the matriarchs, Sarah, Rebecca, Rachel, and Leah. It seems more fitting to invoke the patriarchs for the sons as well, why do we bless them to be like Ephraim and Manasseh?

By blessing our sons to be like Ephraim and Manasseh, we are blessing them with a life devoid of strife. All of the patriarchs struggled in order to develop spiritually. Abraham had to emigrate to a foreign land and underwent ten major tests. Isaac had to lay himself down on an altar and prepare himself to be sacrificed. Jacob struggled with his twin in the womb, a struggle that continued for many decades. A new nemesis, Laban, cheated him several times, costing him years of hard labor. His troubles continued as he mourned Joseph.

It is not until Ephraim and Manasseh that we see lives of serving God that are not accompanied by tribulation. Yet their spiritual development places them on a level with the sons of Jacob, setting them as tribes in their own right.

Rabbi Ovadia Hadiah, born in 1890 in Aleppo, Syria, offered a different explanation. Rabbi Hadiah noted that Joseph’s sons were raised in Egypt, in a household visited by Egyptian officials, receiving an Egyptian education devoid of morality. Egyptian society was based on idolatry and injustice. Nonetheless, they held fast to their religious identity. They resisted outside influences and stayed true to their father’s teachings. Ephraim and Manasseh were strong, confident, and secure in who they were and in their mission in life. This blessing took on great importance as the Children of Israel suffered through their 400-year exile in Egypt, and served as a beacon during the 2,000-year exile that followed the destruction of the Temple in Jerusalem.

Ephraim and Manasseh are also the first siblings in the Torah who are not at odds with each other. Beginning with the first brothers, Cain and Abel, the Torah is replete with sibling rivalry. When Jacob was blessed before his older brother, Esau chased him and threatened him. When Jacob switched the blessing, putting the younger, Ephraim, before the older, Manasseh, however, no conflict ensued. Manasseh did not seek vengeance nor did Ephraim lord it over his older brother. Brotherly love wins out.

How good and how pleasant it is that brothers dwell together.

As any parent can attest, the greatest blessing is children who love each other, helping each other to serve God. The nation of Israel is, after all, one large family.

The blessing of the children, an invaluable element of the Sabbath, is done before the Friday night meal. The blessing is done in a similar manner to how the Kohanim (priests) bless Israel. The father places his hands on the head of each child, blessing them individually, usually beginning with the oldest and ending with the youngest. 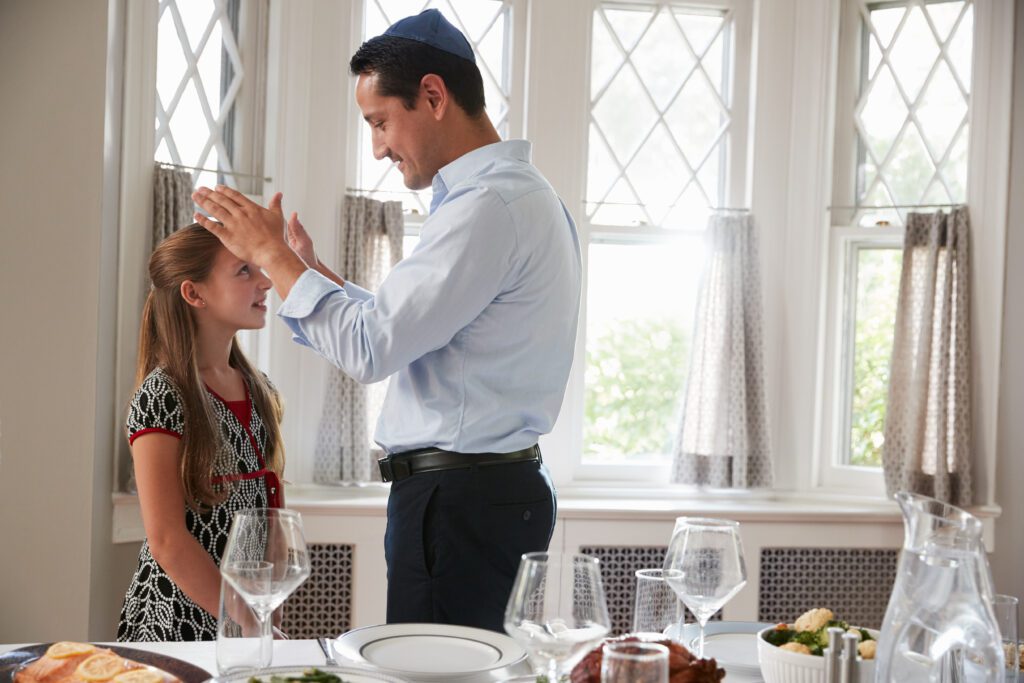 A father blessing his daughter (Shutterstock.com)

For sons, the introductory line is:

For girls, the introductory line is:

May God make you Sarah, Rebecca, Rachel, and Leah.

For both boys and girls, the rest of the blessing is:

May God bless you and protect you.

May God show you favor and be gracious to you.

May God show you kindness and grant you peace.

NOTE: The blessing is usually followed by a kiss and hug.