Expressing Faith Through Effort and Action 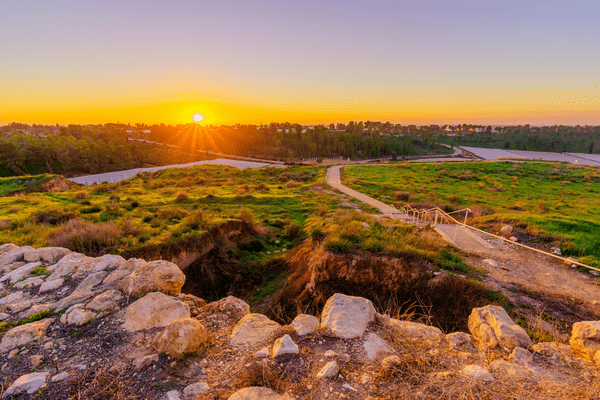 See, Hashem your God has placed the land at your disposal. Go up, take possession, as Hashem, the God of your fathers, promised you. Fear not and be not dismayed.”

The relationship between God and Israel began well before Israel became a nation. God chose Abraham, making promises to him about his descendants that seemed overambitious. But God kept his promises. He redeemed the Jews from Egypt with miracles and wonders, and led them to the Promised Land.

For their part, the Children of Israel were shockingly deficient in rising up to the occasion. They engaged in the worst sin possible, idolatry, while Moses tarried on Sinai preparing to bring them the Torah; God’s greatest gift to mankind. God’s anger was terrifying, but even after this grievous sin he continued to lead them towards Israel.

Despite being under God’s personal care and witnessing His many wonders, the nation still had doubts, demanding that spies verify that the land was as God had described: “flowing with milk and honey.” The spies related that it was, but they interpreted what they saw in a way that made it all seem awful.

After all the amazing things God had done for them, and after forgiving them for the grievous sin of idolatry, the Jews must have been shocked to discover that with the sin of the spies they had gone too far and would not be forgiven. The entire generation was doomed with the exception of Joshua and Caleb.

But that was not all. According to Jewish tradition, the sin of the spies took place on the ninth of the Hebrew month of Av, becoming the template for that day for all time. In the words of the sages, God said to them: “You cried tonight for no reason, I will give you generations of crying for good reason.” The sin of the spies set the stage for the destruction of the Temples in Jerusalem, which were both destroyed on that day, and has been known as a day of tragedy for the Jewish people ever since.

What was it about the sin of the spies that made it so bad? Why did it establish a day of tragedy for the nation of Israel?

Some clues can be gleaned from inspecting the repetition of the event in Deuteronomy as related by Moses just before entering the land. In the initial account (Numbers 13:1), God commanded the Jews to send spies into the land. But when Moses repeats the story, he begins by emphasizing that the people demanded to send the spies (Deut. 1:22). While seemingly complacent in Numbers, Moses acknowledges complicity in Deuteronomy, saying that he agreed to the plan.

Perhaps most shocking and most revealing is the addition emphasizing what the sin really was:

Yet you refused to go up, and flouted the command of Hashem your God. You sulked in your tents and said, “It is because Hashem hates us that He brought us out of the land of Egypt, to hand us over to the Amorites to wipe us out. What kind of place are we going to? Deuteronomy 1:26-28

Moses then specifies what slandering Israel revealed about the Jews and their relationship with God:

Yet for all that, you have no faith in Hashem your God, who goes before you on your journeys—to scout the place where you are to encamp—in fire by night and in cloud by day, in order to guide you on the route you are to follow.” Deuteronomy 1:32-33

“You have no faith in Hashem”? How could it be that the nation had no faith in God? Isn’t this the same nation who leaped into the sea, trusting that God would save them? Isn’t this the same nation that boldly sacrificed a lamb, holy to the Egyptians, painting their doorposts with the blood to proclaim their faith that God was about to redeem them?

How was the faith required to enter the land different from those acts of faith?

The Exodus was an expression of God’s will and a manifestation of His power. Nature was turned on its head and even the mighty Pharaoh had to submit. Throughout their stay in the desert, the Israelites were sustained directly by God. But that is not how divine providence works in the land of Israel where nature is an expression of the relationship between God and the Jews.

In the desert, water ran forth from a rock. In Israel, the Jews pray for rain and, if God is pleased with their actions, rain falls. In the desert, food miraculously appeared in the fields every morning. In Israel, the Jews must sweat in order to produce food, which, God says, will only grow if they are faithful to him. And once it does grow, it must then be tithed and brought to the Temple. The very existence of fruit in the land of Israel is an expression of the relationship between God and the Jews and requires work on the part of the people.

When the spies brought their slanderous report against the land, they were rejecting this kind of existence. They preferred to remain in the desert, outside of the Holy Land, and eat for free. They had faith in God, but did not want to exert effort in order to maintain and elevate the relationship.

The land of Israel is the physical manifestation of the Torah. It is God’s greatest gift to mankind. Only in the land of Israel can the Jews have an intensive and immersive relationship with God, requiring constant input and action. In fact, according to Nachmanides, mitzvoth (Torah commandments) are only relevant inside the land of Israel. But this requires more than faith and even more than prayer, it requires effort.

Where you are, your physicality, defines your relationship with God. When the nation sinned with the spies, they were choosing a diminished relationship with the Almighty. The Book of Lamentations begins with the word eicha (אֵיכָה). Translated as ‘Alas’, it can also be read ayeka (אַיֶּכָּה), meaning ‘where are you?’. It is the question God uses to confront Adam after he sinned (Genesis 3:9).

Do you want to remain in the desert with no responsibilities or practical implications?

Or do you choose to cross the river, and express your faith and relationship with God through your actions?