A God of Gold 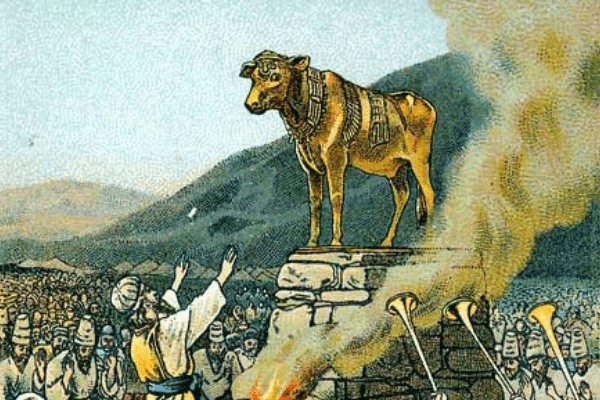 When the people saw that Moshe was so long in coming down from the mountain, the people gathered against Aharon and said to him, “Come, make us a god who shall go before us, for that man Moshe, who brought us from the land of Egypt—we do not know what has happened to him.”

In a divine tour de force, God brought the Children of Israel out of Egypt with miracles and wonders including the ten plagues and the splitting of the sea. Never before had men witnessed such direct proof of God’s actions. Nonetheless, when Moses delayed in coming down from communing with God on Mount Sinai, the people despaired and sinned by creating a golden calf.

How could it be that the same people who witnessed God so clearly could sin soon afterwards? According to the Midrash, Satan meddled in the affair by suspending an image of a lifeless Moses in the air above the camp, leading the people to despair.

The delay was not great. Before ascending Sinai, Moses promised the Children of Israel that he would return after forty days. But the possibility of having lost their leader was more than they could handle, and when the sixth hour of the fortieth day since the Revelation (the 16th of Tammuz) arrived, and Moses had not returned, the people rebelled. The Midrash relates that Hur, Miriam’s son who had temporarily taken over the leadership of the Jewish camp, attempted to dissuade them from sinning but the people killed him, demanding that they make an idol to take Moses’ place.

Aaron also tried to dissuade the Jews from sinning. When they demanded he makes them a god, he told them to hand over the gold jewelry from their wives and daughters, sure that the women would object. The women objected but the men brought their own gold to create the idol.

According to the Midrash, Aaron threw the gold into the fire and it magically formed a calf, skipping and animated. 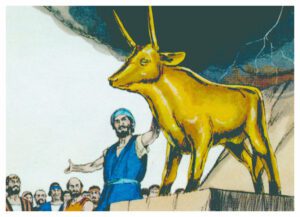 One explanation is that this was the work of Pharoah’s magicians who had left Egypt with the Children of Israel as part of the Mixed Multitude. Another explanation concerns a splinter used by Moses to locate the bones of Joseph before leaving Egypt. The splinter was inscribed with the words aleh shor (rise up, ox). When Moses threw the splinter into the Nile, the iron chest containing Joseph’s bones rose to the surface. This splinter was secured by wicked Micah, and when Aaron cast the gold into the fire, Micah threw the splinter after the gold, and as a result, a moving calf came out.

Aaron then built an altar, and on the following day sacrifices were offered and the people feasted and danced and played. It was then that God told Moses of the apostasy of the “stiff-necked people,” whom He proposed to destroy (Exodus 32:7-10).

Upon returning, Moses became angry and threw down the two Tablets of Stone written by the finger of God, breaking them. Moses then called out, “Whoever is for God, come to me.” His own tribe of Levi had not sinned and responded to his call, killing about 3,000 of the sinners.

The Talmud states that if all the people had abstained from worshiping the calf, the Tablets of Stone would not have been broken. As a result, the Law would never have been forgotten in Israel and no nation would ever have had any power over the Hebrews (Eruvin 54a). 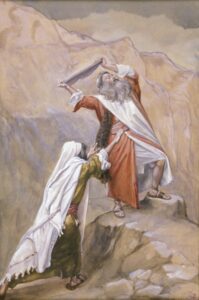 Moses then burnt the golden calf in a fire, ground it to powder, scattered it on water, and forced the Israelites to drink it. A plague then struck the nation. Moses’ actions were echoed in the bitter waters drunk by a sotah; a wife whose husband suspected her of adultery but who had no witnesses to make a formal case (Numbers 5:11–31). In the case of the sotah, the curses are written on a scroll. The ink from the scroll is then dissolved in a mixture of water, earth from the Temple floor and a bitter substance. The woman is forced to drink the mixture and if she is guilty, the water causes her organs to swell, killing her. It seems that in spreading the powder of the calf on the water, Moses was comparing the Jews to an adulterous wife.

The next day, Moses called for the people to repent. He again ascended Mount Sinai for 40 days, returning with another set of tablets on the 10th of Tishrei; Yom Kippur (the Day of Atonement).

The sin was indeed grievous, as expressed by the Talmud which states “There is not a misfortune that Israel has suffered which is not partly a retribution for the sin of the calf” (Sanhedrin 102a).

This raises the question of what precisely was the sin that took place. It was clearly idolatry, but when Aaron called for sacrifices to the golden calf on the following day, he said, “Tomorrow shall be a festival of Hashem!” (Exodus 32:5), implying that the intention of the people was to serve the God of Israel via the golden calf. Creating a representation of God is, of course, idolatry forbidden by the Torah, and giving God a physical form is a transgressing the precept of “God is One”. But another form of idolatry is serving the God of Israel indirectly via an intermediary, and this was precisely the sin perpetrated by creating the golden calf.

Many commentators have also noted that the golden calf was an attempt to turn the worship of God into a material endeavor, comparing it to lavish houses of worship or using wealth in place of charitable deeds and worship.

In a very real sense, the sin was repeated when two golden calves were placed in the temples of Beth-El and Dan by Jeroboam I of Israel with the declaration of: “You have been going up to Yerushalayim long enough. This is your god, O Yisrael, who brought you up from the land of Egypt!” (I Kings 12:28).

Though it is difficult to imagine a sin more grievous than idolatry at the foot of Mount Sinai, the Talmud (Berachot 32a) gives a compelling perspective. The Talmud asks the origin of the name of the site Di Zahav (mentioned in Deuteronomy 1:1) and explains that it is named for the gold (zahav) that God commanded Israel to take out of Egypt. As God commanded Israel to take the gold, He was, as it were, complicit to some degree in the sin of the calf. Moses confronted God by saying, “Master of the Universe, because of the gold and silver that you lavished upon Israel during the exodus from Egypt until they said enough [dai]; it was this wealth that caused Israel to make the Golden Calf.”

God forgave the Children of Israel for the sin and, at that point in the Exodus, they were still on track to travel directly to the Promised Land. But just before entering, the nation sinned by paying heed to the spies when they slandered the Land of Israel. For this sin, the entire generation (save Joshua and Caleb) was doomed to die in the desert and the entrance into the land was delayed almost 40 years. So grievous a sin as idolatry is, it is forgivable, unlike rejecting the Land of Israel for which there is no clemency.