Mourning My Temple: Why We Are Still Crying 2,000 Years Later 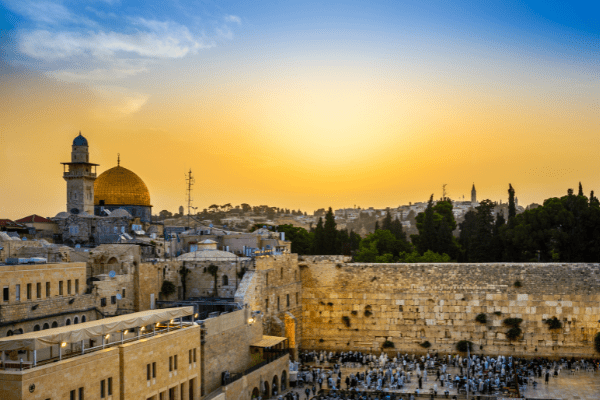 If I forget you, O Yerushalayim, let my right hand wither;

My son had his blanky; the blanket he used in the crib when a baby. Over the years, we tried to replace it but to no avail. Now that he was ten years old, we had given up on replacing the now-tattered piece of cloth. I tried half-heartedly to protest when I saw him packing it for our vacation in a Jerusalem hotel, but knew that the blanket was coming with us.

The vacation was wonderful until we came back from breakfast the first morning. Housekeeping had cleaned the room. I was lying down for a quick nap when his screams kicked in. His blanky was gone. I called the management but after a search and questioning the maid, we turned up empty. The maid finally suggested that the blanky had gotten scooped up with the hotel’s bed sheets and sent to the laundry. The head of housekeeping promised to keep an eye out for it but warned that a ratty piece of cloth would probably be tossed out.

The vacation was a loss. Bedtime was a nightmare as my son fought sleep, longing for his blanky. When we returned home (without the blanky) my son continued to pine for his blanky, drawing pictures of it and laying the pictures on his bed. Bedtime stories became epic tales of the blanky’s return.

Does this sound unreasonable? Was my son overreacting? By mourning for Jerusalem, some people think the Jews are acting like a spoiled child who has had his blanky stolen. Can’t we just forget about Zion and assimilate into other nations? How many times a year must we fast and mourn for a Temple that was destroyed when Rome was still a thing?

For the death of a close relative, Judaism mandates a period of mourning beginning with seven days of intense mourning, followed by a less intense 30 day period, and culminating at the end of a year. Even mourning a loved one has limits.

But when it comes to the Temple in Jerusalem, the Jews are still mourning 2,000 years later. In fact, the Talmud (Ta’anit 30b) considers it commendable to mourn for Jerusalem, as the sages teach “Whoever mourns for Jerusalem will merit seeing its joy”

“The three weeks” is a period of mourning over the destruction of Jerusalem and the Temple. It begins with the 17th of Tamuz, a fast day commemorating the breach of the walls of Jerusalem, and ends with Tisha B’Av (9th of Av), a more intense fast day commemorating the actual destruction of the Temple. The three weeks of mourning build in intensity, culminating on the 9th of Av.

No Jew who is alive today has ever seen the Temple. Yet we mourn as if it was a personal loss. The Talmud (Yerushalmi Yoma 1:1) explains this: “Every generation in which the Mikdash (Temple) is not rebuilt, it is as if that generation destroyed it”.

The Talmud is saying that there is an actual Temple in potential that should have been built in my lifetime. And just as Solomon’s Temple and the Second Temple were destroyed for the sins of the people, the Temple intended for my generation, my Temple, is not here because of my actions, because of me.

This leaves me with two options. The first (and less-preferred) option is to go to Home Depot, buy a huge quantity of building materials, and haul it all to the Temple Mount.

The better option is to fix what is broken. Jews know exactly why the Temple was destroyed. The Talmud teaches that it was the sin of sinat chinam (causeless hatred) that was endemic to the generation which led to the destruction of the Temple. If we want the Temple to be rebuilt, we must ensure that causeless hatred no longer continues to plague us.

Yet an objective look around will show that causeless hatred has not gone away. If anything, the internet and social media have made this sin into one of the largest industries of the modern era. How can the Temple be rebuilt in the age of Twitter?

So of course I am still mourning. Mourning for the Temple is not just coping with loss, it is grieving for something for which we yearn but has not yet been built. Loss is in the past, the failure to rebuild is in the present. While normally we tend not to dwell on our losses, the loss of Jerusalem and the Temple is different. For this reason, Jews have dedicated three weeks every year for the last 2,000 years to mourn its destruction.

But we have not given up hope. God promised us in the sweetest terms that one day we will succeed. We will overcome causeless hatred and merit seeing the glory of the Temple.

And when that happens, the huge hole in our hearts will be filled, our sadness will turn to joy, and, in the words of Zechariah (8:19), our fasting and mourning for our loss (past and present) will be replaced with joy.