Being Chosen and Keeping Kosher 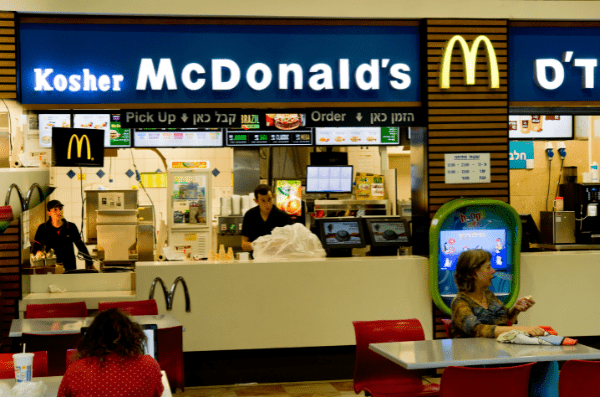 Speak to B'nei Yisrael thus: These are the creatures that you may eat from among all the land animals:

Jews have historically been separated from the other nations by our myriad and complex dietary requirements. This includes both how the food is prepared and the limits on which animals we can eat.

God begins to specify dietary restriction in Leviticus 11, beginning with the types of land animals that we are permitted to eat:

These are the creatures that you may eat from among all the land animals: any animal that has true hoofs, with clefts through the hoofs, and that chews the cud—such you may eat. Leviticus 11:2-3 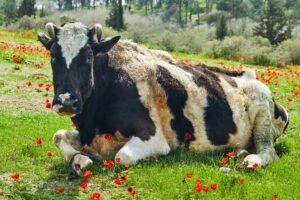 A cow, quintessential kosher animal, lying among the anemones in Israel (Shutterstock.com)

The Torah goes on to specify animals that have one of the attributes but not the other and are, therefore, not kosher: camel, daman, hare and, of course, the pig, which has cloven hooves but does not chew its cud.

Deuteronomy 14:4-8 also explicitly names 10 animals considered ritually clean: the ox, the sheep, the goat, the deer, the gazelle, the roebuck, the wild goat, the ibex, the antelope, and the mountain sheep. All of them are herbivores—none of them are animals of prey. These animals don’t have upper teeth and chew their food in a side-to-side motion.

It is interesting to note that the opposing classifications include both domesticated and wild animals, that is to say, that pure animals can be domesticated (i.e. cows) as well as wild animals (i.e. antelope).

Leviticus adds an additional warning against animals that have paws and walk on all four (Leviticus 11:27). It is interesting to note that the only quadrupeds with paws are the carnivorans (dogs, wolves, cats, lions, hyenas, bears, etc.), and all carnivorans fall under this description.

Horses, which were present and significant in society, make chewing motions that mimic chewing cud but do not have simple stomachs. They also do not have cloven hooves.

There are those that argue that while camels are actually not true ruminants, they chew cud. They are, however, pseudo ruminants and have a three-chambered stomach, unlike cows and other ruminants that have a four-chambered stomach. It is also argued that they do, in fact, have cloven hooves, but it is countered that they are not ‘proper hooves’.

It is also argued that the Bible is incorrect in claiming that members of the rabbit family chew their cud. Although hares and coneys do not ruminate at all, they do usually re-ingest soft cecal pellets made of chewed plant material right after excretion for further bacterial digestion in their stomach and this serves the same purpose as rumination.

The Torah commands us not to eat the flesh or touch the dead carcasses of unclean animals:

You shall not eat of their flesh or touch their carcasses; they are unclean for you. Leviticus 11:8

Contact with their carcass imparts ritual impurity and requires purification:

And anyone who carries their carcasses shall wash his clothes and remain unclean until evening. They are unclean for you. Leviticus 11:28

It is also important to note that the only milk and dairy products suited for consumption are from kosher animals.

Though the classifications of clean and unclean animals were given as commandments at Sinai, they were present in the generation of Noah:

Of every clean animal you shall take seven pairs, males and their mates, and of every animal that is not clean, two, a male and its mate; Genesis 7:2

The reason why God commanded the Jews to keep the dietary laws is not explained in the Torah and remains unclear. Nachmanides, also known by the acronym “Ramban”, suggested that what one eats becomes part and parcel with their entire being, affecting not only the physical body but even the personality. Since the impure animals have negative traits, God did not want us to eat them, lest we take on those negative traits. Others point out that when it comes to the dietary laws, by choosing to eat certain animals from among others, we are reminded of God’s choosing the Israelites from among the families of the world.

But Jews do not need to understand the meanings behind the commandments. Even though choosing some animals and not others reflects God’s selection of the Jewish people, the criteria employed in making these choices—hooves, leaping legs, and scales—remain unexplained. Ultimately, we do it because God told us to. Similarly, while the Jews are defined as the chosen people and the criteria that define a Jew are clear, the reasons are not. Being chosen is not a qualitative or relative definition. It was simply defined by God.