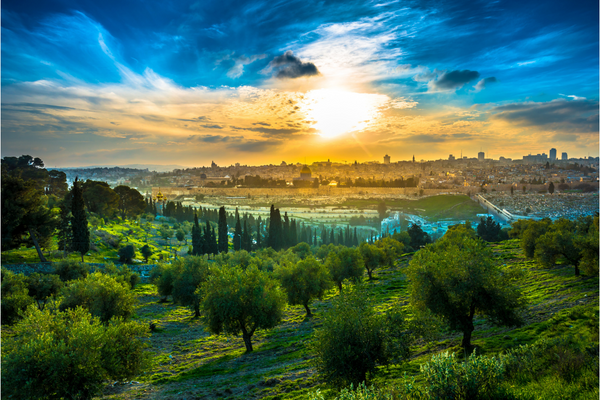 Once, I went out to the forest next to Bat Ayin to pray, or, more accurately, to have a conversation with my Creator. Israel is a beautiful place, especially if you have the eyes to see its inner beauty. As I sat there, I saw how the thorn bushes were struggling (and, thank God, failing) to maintain their dominance. The Roman conquerors had salted and burned the earth 2,000 years ago and the Arab Bedouins had passed through, allowing their flocks of goats to devour the foliage completely, plucking out the roots. But finally, the land was returning to life and I was seeing it happen in front of my eyes.

And then I heard it. The land was singing to me, joyous that the Jews had returned. The land could sense who was dwelling on it.

We do not own the land, it belongs to God. God did not simply give it to the Jews. When He made the covenant with Israel He created an entity; the land of Israel and the descendants of Jacob bound together by the Torah. Those three elements together are the manifestation of the covenant.

From the moment God first told Abraham to “Go forth from your native land and from your father’s house to that land that I will show you” (Genesis 12:1), He intended the union of the land of Israel and the Chosen People.

As he leaves the people he has led, Moses is denied the joy of entering the land of Israel. But he spends his last moments among the Jews speaking about the land. The Torah portion of Eikev begins with a promise of blessing in the land (7:12-13). It addresses possession of the land (8:1), praises the virtues of the land of Israel (8:7-10, 11:10), contrasts the land of Israel with Egypt and concludes that section by saying that God’s eyes are always on the land (11:10-12). Finally, it promises that they will inherit the land and gives the borders (11:23-25).

But what is so special about this tiny slice of geography that it should play such a prominent role in God’s relationship with the Jews and all of mankind?

Many years ago, I traveled to Ukraine to visit the gravesite of Rebbe Nachman of Breslev. I was stunned by the countryside. Miles of gently rolling chocolate-brown fields that had never needed irrigation. A century ago, those fields fed all of Europe. I compared that to the fields I had helped to farm on Kibbutz Sde Eliyahu in the Jordan Valley. Without irrigation, nothing but thorns would grow.

Even in the Bible, we see the patriarchs fleeing Israel to go to Egypt in order to escape famine. The waters of the Nile were a constant, flooding annually to rejuvenate the land. If God had wanted to reward the Jews, he would have given them Egypt. But, ironically, the lush land of Egypt was given to the descendants of Noah’s cursed son, Ham.

Indeed, it seems that fertile land attracts evil people. When given a choice, Lot chose the fertile valley of Sodom and Gomorrah while Abraham chose to remain in the less fertile land of Israel.

The land of Israel is not a desert. It has supported the descendants of Abraham, Isaac, and Jacob for 5,000 years. But this sustenance is not solely dependent on nature. God constantly watches the Land of Israel. Moses warned that rainfall and sustenance are a result of the relationship between God and the Jews.

It is a land which Hashem your God looks after, on which Hashem your God always keeps His eye, from year’s beginning to year’s end. If, then, you obey the commandments that I enjoin upon you this day, loving Hashem your God and serving Him with all your heart and soul, I will grant the rain for your land in season, the early rain and the late. You shall gather in your new grain and wine and oil. I will also provide grass in the fields for your cattle—and thus you shall eat your fill. Deuteronomy 11:12-15

In fact, my experience in the forest of Bat Ayin gave me the opportunity to personally witness prophecy unfolding, as described by Isaiah:

The inhabitants of the land of Israel, by the very nature of the land, live in a constant state of miracles. The state of the land is dependent on our relationship with God. In the end, this is a land whose very existence constantly defies the laws of nature. The reality in the land of Israel is such that one is always subject to the divine will. As a result, one must maintain a direct connection with God, emulate Him, live a life of hard work and humility, be faithful to oneself, to the heritage of one’s ancestors, to morality and to the mitzvot. These are the means by which one can be worthy of the goodness of this good land.