Is There Biblical Precedent for Expanding the Borders of the Land of Israel? 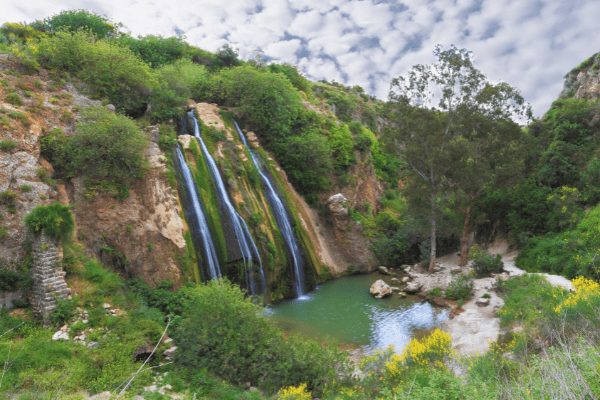 Thus I instructed you, at that time, about the various things that you should do.

“Can I get you something to drink?”

“Well, okay. If it is not a bother, a small cup of water would be nice. And if you are already pouring, maybe you can heat it up. And put in a tea bag. And two teaspoons of sugar.”

When God first appeared to Abraham, he was an old man, wandering around the Middle East. The Torah does not record Abraham’s reaction to God’s promises but most people, when presented with such a generous offer, would have been incredulous; descendants too numerous to count and free real estate. God promised that the land would go to Abraham’s offspring, later specifying that said Promised Land extended from “the great river to the Euphrates” (Gen. 15:18). God was certainly being generous, compounding that generosity by taking the Children of Israel out of Egypt and bringing them to that Promised Land.

So when the tribes of Reuben and Gad demanded to choose their own portion that was on the far side of the Jordan River, was that the first recorded case of the classic Jewish trait of chutzpah? The land specified by God wasn’t good enough so they wanted more!

Moses eventually agreed to their request after they promised to lead the Children of Israel in the conquest of the land of Canaan. But then he went even further and said that half of the tribe of Manasseh would settle on the other side of the Jordan with them. Why would he settle even more Jews outside of the God-given land?

Moses was closer to God than any prophet before or since. He brought the Torah to the Jews directly from God. Rabbi Menachem Mendel Schneerson, the spiritual leader of the Chabad Hasidic movement, noted, “All the essential things relating to the Jewish people were accomplished by Moshe.”

When Moses divided up the land, he knew that in the future the borders of Israel could be expanded. Moses therefore asked half of the tribe of Manasseh to settle on the eastern side of the Jordan, a move that represented the future expansion of the boundaries of the Land of Israel.

But why was adding the half-tribe of Manasseh necessary? Couldn’t this be accomplished by allowing Reuben and Gad to settle there?

Reuben and Gad chose that land based on monetary considerations, choosing real estate that would best serve their animal husbandry interests. Perhaps most disturbing, by doing so, the piece of Promised Land that was their destiny would now go to someone else.

Despite the obvious flaws in their request, we see that Moses gave his assent after they convinced him that the request was not a rejection of the Promised Land or a shirking of responsibilities. But since their acquisition of the land came about as a result of their own request, for monetary reasons and at the expense of their portion in the land itself, they could not serve as the representation and precedent for future expansion of the Land of Israel.

Moses therefore added half of the tribe of Manasseh who received their portion through Moses and not on their own request, and retained their portion in the Land of Israel. In doing so, he foreshadowed, and gave his blessing to, increasing the borders of the land.

This set a precedent for future generations to add to the Biblical boundaries of Israel. In fact, the sages teach us that the Land of Israel was meant to expand with time to include the surrounding lands. Eventually, Israel expanded all the way up to the Euphrates. And in the era of the Messiah, the holiness of the land of Israel that is currently restricted to the Biblical borders will encompass the entire earth! That is not to say that the Jews should conquer territory with imperialistic and monetary motivations (like Reuben and Gad). But, rather, the desire to connect to the God of Israel through the land of Israel will expand beyond the Biblical borders described to Abraham.

Moses specifically chose the tribe of Manasseh to accomplish this since this tribe exhibited extraordinary love for the Land of Israel, as demonstrated when the daughters of Zelophehad confronted Moses with a demand to inherit their father’s portion of Israel. ANd Manasseh himself was, of course, the son of Joseph, who yearned for Israel so deeply that he insisted that his bones be buried in Shechem.