The Biblical Symbolism Of Passover Foods 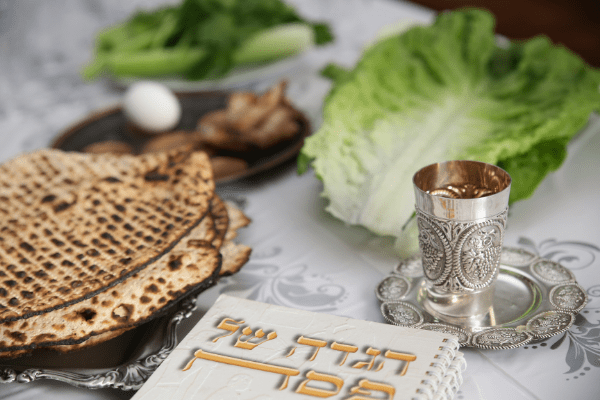 The home-based Passover service, known as the Passover Seder, is brimming with Biblical symbolism.

Seder is the Hebrew word for order, alluding to the idea that God runs the world in an orderly manner. Similarly, there are 15 steps to the Seder and they are completed in a predetermined fashion.

The 15 steps of the Seder parallel the 15 steps that led to Solomon’s Temple and the 15 chapters of Psalms (120-134) that each begin with the words “A Song of Ascents” which the Levites recited as they climbed those 15 steps.

There is virtually nothing that occurs in a Jewish home on Seder night that does not have levels upon levels of symbolic meaning. To help our readers deepen their understanding of the Biblical significance of Passover symbols, we present the following Guide to Biblical Symbolism Of Passover Foods:

In Jewish thought, matzah, or unleavened bread, has so many layers of meaning one could spend the entire Seder just discussing matzah as a symbol. But its most literal understanding is the most Biblical and the most well-known. The matzah we eat today represents the bread that the Israelite slaves took with them during the Exodus from Egypt.

And they baked unleavened cakes of the dough that they had taken out of Egypt, for it was not leavened, since they had been driven out of Egypt and could not delay; nor had they prepared any provisions for themselves. Exodus 12:39 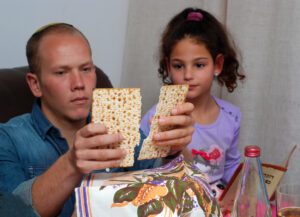 Perhaps the most dramatic of the symbols is the zeroa (shank bone) which represents the Korban Pesach (Passover sacrifice) itself. Ideally, the zeroa on a Seder table should come from an actual lamb, but many people substitute a chicken wing. It is lightly roasted to remind participants of the Passover sacrifice, as described in Exodus 12:3-11:

Speak to the whole community of Yisrael and say that on the tenth of this month each of them shall take a lamb to a family, a lamb to a household. But if the household is too small for a lamb, let him share one with a neighbor who dwells nearby, in proportion to the number of persons: you shall contribute for the lamb according to what each household will eat. Your lamb shall be without blemish, a yearling male; you may take it from the sheep or from the goats. You shall keep watch over it until the fourteenth day of this month; and all the assembled congregation of the Israelites shall slaughter it at twilight… They shall eat the flesh that same night; they shall eat it roasted over the fire, with unleavened bread and with bitter herbs. Do not eat any of it raw, or cooked in any way with water, but roasted—head, legs, and entrails—over the fire… Exodus 12:3-11

Although the zeroa appears on the Seder plate, in reality, it is not touched during the Seder itself and certainly not eaten. Instead, the afikoman, the final taste of matzah, eaten after the entire meal is completed, also represents the Passover sacrifice which was eaten with matzah:

They shall eat the flesh that same night; they shall eat it roasted over the fire, with unleavened bread and with bitter herbs. Exodus 12:8 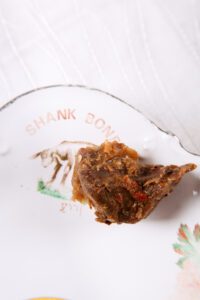 You shall present an offering by fire, a burnt offering, to Hashem: two bulls of the herd, one ram, and seven yearling lambs—see that they are without blemish. The meal offering with them shall be of choice flour with oil mixed in: prepare three-tenths of a measure for a bull, two-tenths for a ram; and for each of the seven lambs prepare one-tenth of a measure. Numbers 28:19-21

As a  symbol of our grief over not being able to bring this festival sacrifice because we have no Holy Temple,  we place a roasted, hard-boiled egg on the Seder plate. Like the zeroa, the egg is not eaten during the Seder, but it is a common custom to eat a regular hard-boiled egg early in the Seder meal. 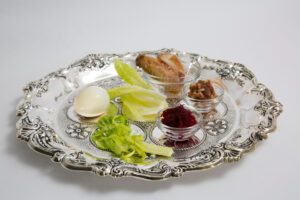 Charoset is a sweet dish, generally made with apples (and sometimes dates), nuts and wine. It often has a paste-like texture, symbolizing the mortar used by the Israelite slaves in their work building the cities of Pithom and Raamses for Pharaoh.

So they set taskmasters over them to oppress them with forced labor; and they built garrison cities for Pharaoh: Pithom and Raamses… the various labors that they made them perform. Ruthlessly they made life bitter for them with harsh labor at mortar and bricks and with all sorts of tasks in the field. Exodus 1:11-14

Translated as bitter herbs, horseradish or romaine lettuce are generally used as maror in order to symbolize bitterness of slavery. The word maror is hinted at in the Hebrew word va-y’mareru, which is the first Hebrew word in the verse which describes how the Egyptians embittered the lives of the Jews with hard labor:

the various labors that they made them perform. Ruthlessly* they made life bitter for them with harsh labor at mortar and bricks and with all sorts of tasks in the field. Exodus 1:14

Karpas is a fresh green vegetable, usually celery or parsley, though some have the custom to use potato.  It symbolizes spring, the season during which the Bible declares that Passover must be celebrated each year. Aviv (Abib) is Hebrew for the spring season:

You shall observe the Feast of Unleavened Bread—eating unleavened bread for seven days as I have commanded you—at the set time in the month of Abib, for in it you went forth from Egypt; and none shall appear before Me empty-handed; Exodus 23:15

Karpas is dipped in salty water, said to represent the tears of the Israelite slaves due to the bitterness of their enslavement. According to Rabbi Yosef Chaim Sonnenfeld who served as a Chief Rabbi of Jerusalem prior to the establishment of the State of Israel, there is a tradition that the salt water is also a reminder of the miracle of the crossing of the Red Sea:

Then Moshe held out his arm over the sea and Hashem drove back the sea with a strong east wind all that night, and turned the sea into dry ground. The waters were split, and the Israelites went into the sea on dry ground, the waters forming a wall for them on their right and on their left. Exodus 14:21-22

The verse immediately following these four expressions includes a fifth expression of redemption: “I will bring you into the land.”

I will bring you into the land which I swore to give to Avraham, Yitzchak, and Yaakov, and I will give it to you for a possession, I Hashem.” Exodus 6:8 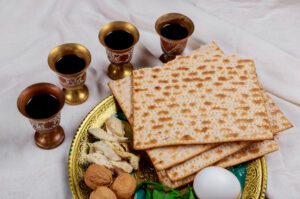 With an eye to the End of Days, The Israel Bible comments on this fifth expression of redemption, providing us with a satisfying way to conclude the Guide to Biblical Symbolism Of Passover Foods:

Why, then, do we not have five cups of wine at the Seder? The Talmud (Pesachim 118) explains that while the first four expressions of redemption from Egypt have in fact been realized, the fifth expression, ‘I will bring you into the land’ has not yet been completely fulfilled. Only when all the Jews return to Israel and the Mashiach (Messiah) comes to Jerusalem will we rejoice with a fifth cup.