Shavuot and Jerusalem: Revelation Then and Now 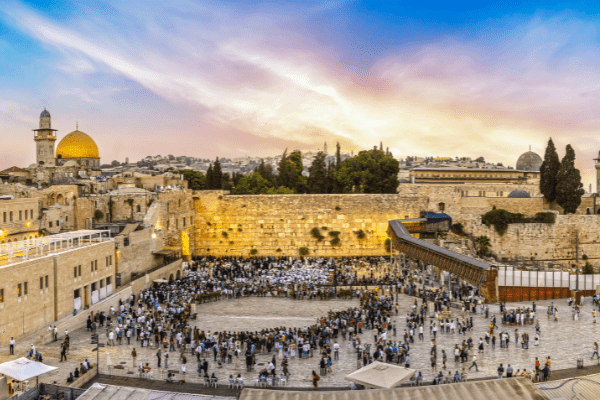 Rejoice with Yerushalayim and be glad for her, All you who love her! Join in her jubilation, All you who mourned over her—

On June 15, 1967, Rabbi Norman Lamm delivered a lecture at The Jewish Center on the Upper West Side of Manhattan. It was the second day of the festival of Shavuot and five days after the Six-Day war had ended. In his passionate speech, the rabbi compared the Israeli victory to the revelation of the Torah at Mount Sinai, which took place on the holiday of Shavuot. He concluded that the unification of Jerusalem was a modern-day revelation and a miraculous precursor to the Messiah.

Rabbi Lamm began by noting that there are three locations that play an important role in the holiday: Egypt, as the holiday commemorates the Exodus from Egypt, the Sinai Desert, as Shavuot commemorates the giving of the Torah at Mount Sinai, and Jerusalem, because, as one of the three major festivals, Jews throughout Israel and the world would make the pilgrimage to the Temple in Jerusalem on that day.

“It is interesting that all three of these places have taken on added significance in our lifetime,” Rabbi Lamm said, connecting the holiday to the recent war. “Egypt was foremost amongst the Arab countries that attacked Israel at its birth in 1948 and which was soundly defeated. Sinai is a desert in which Israel scored great military successes in 1956; indeed, this was repeated last week, and over Mt. Sinai there today flies the blue and white flag of the State of Israel.”

“And now, in this past week or two, Jerusalem has risen to prominence: Jerusalem is once again in Jewish hands!”

“ After 1,897 years, the ancient Holy City has been reclaimed by her loyal children. Jerusalem is the symbol par excellence of the astounding events of these past two weeks,” Rabbi Lamm said.

He asked the listeners to view the recent war, more specifically the unification of Jerusalem, from a larger perspective that transcended politics.

“If we will do so, we will realize that a revelation has taken place!” the rabbi declared enthusiastically. “Before our very eyes, there has unfolded a miracle of a very special kind: a true giluy shekhinah, a revelation of the Presence of God. How else can one explain the extraordinary events which we have witnessed? The burden of proof is now on the cynics and the agnostics. It is for them to explain what has happened from the point of view of a naturalistic philosophy and a materialistic view of history. I believe that such explanations as may be offered will be as tortured and as incredible as to make the most far-fetched doctrines of faith sound much more realistic.”

Rabbi Lamm then described how Israelis, even secular Israelis, were overcome with religious devotion towards the Western Wall.

“A visitor recently returned, told me that the day after the capture of the Wall, Jews who had never in their lives made a blessing stayed three hours in the hot sun in order to be able to pray in teffilin [phylacteries] at the side of the kotel maaravi [Western Wall]. And the press informed us today that yesterday, the first day of Shavuot, tens of thousands of Jews made the pilgrimage to the Wall.”

“Another visitor informed me several days ago that the first, or one of the first Jews to enter the me’arat ha-makhpelah [Cave of the Patriarchs in Hebron conquered one day after Jerusalem], in some 800 or 900 years, was General Moshe Dayan [who was publicly non-religious]. When he entered, he did not know exactly what to do. But instinctively he straightened up, offered a snappy salute, and said ‘Shalom’ to Abraham, Isaac, and Jacob.” 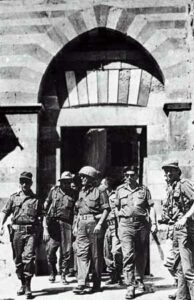 Minister of Defense, Moshe Dayan, Commander of the Central Command, Uzi Narkis, and Gen. Rechavam Ze’evi visiting the gate of the Tomb of the Patriarchs (WZO)

“Now this places a great burden upon us, greater than we realize,” Rabbi Lamm said. “Even observant religious people usually possess an element of doubt within their faith. We use this doubt to excuse many of our transgressions, and we excuse the existence of this doubt by saying that had we lived in the age of the prophets or the age of miracles or the age of revelation, we would be sufficiently persuaded and convinced to be able to live according to the highest precepts of our faith, but that the absence of any such evidence justifies this seed of doubt. Were we exposed to the same wonders as was Israel of old, “and Israel saw the Egyptians dead at the shore of the sea,” then we too would react as they did.”

The rabbi then emphasized that there was no longer any room for doubt or a lack of faith.

“Now, we can no longer avail ourselves of that luxury. For we have seen, as did Jews in very special moments of history,” Rabbi Lamm said. “Through electronic eyes and ears, each of us has been a personal witness to the great miracle, the great revelation of 1967.

How our parents and grandparents and theirs before them, through all the ages, would have thrilled to this singular experience — not only because of the victory that would have given them relief from the humiliation of exile, but because this liberation of Jerusalem in our times is a vindication of their faith throughout all times.”

Rabbi Lamm then described the challenges of faith the Jews faced throughout the exile, dispersed among the gentile nations.

“For indeed the giluy shekhinah of the past two weeks is a vindication of ancient promises, the fulfillment of hoary prophecies,” the rabbi said, referring to Isaiah chapters 40 and 52, and Zechariah chapter 8, which praises Jerusalem.

“Indeed, what happened last week has suddenly made new order and new sense out of all the past. The might of the Lord God of Israel has been revealed to us. He has kept His word to us! How tragically near-sighted and picayune it would be for us to fail to appreciate these larger religious dimensions of these current events. How enormously foolish to see in this Jewish victory nothing more than the brilliant strategy of a Dayan, the wise diplomacy of an Eban, the arrogance of a Nasser, or the cowardice of the Arab soldier. No doubt, these are important elements; but to see only these is to miss the heart of the issue. That is tantamount to explaining love in terms of physiology; heartbeat, pulse rate, breathlessness. It is like a man who describes Einstein’s theory of relativity as a matter of his penmanship and handwriting. It makes no more sense than describing the revelation at Mt.Sinai by explaining what caused the lightning and the thunder, reducing all of Sinai to a question of atmospheric conditions. We must be wiser than that, although we are too close to the incident to see it in full perspective.”

“By the Israeli capture of Jerusalem, we have permitted, as it were, God to rise on high! In this revelation, we were not passive recipients; we went forth towards God and found Him coming towards us.”

“Is our task done? No, certainly not. Not until the full significance of what has happened has not only been revealed but also understood and digested, not until our eyes and ears and hearts have been opened and our lives and habits radically changed – in a word, not until the Messiah has come.”

“But in our days those who are wise have sensed his approach, those who can hear with the inner ear have heard his footsteps, those who can see with the inner eye have perceived the first rays of his coming. And the Jewish tradition has taught us that we can, by our conduct and our actions, bring on the Messiah before his appointed time.”

“We are, assuredly, on the threshold of a new era. Our response to this revelation must be immediate and profound. None of us dare remain the same after all this. Whoever succumbs to life as usual, whoever permits his [tomorrow] to be nothing but a repetition of his [today] has failed the greatest test in the last twenty centuries.”

“We have seen the first promise come true last week,” Rabbi Lamm continued. “Jerusalem today reaches the very gates of Damascus! The troops of Israel, of which Jerusalem is the eternal capital, are in striking distance of the capital of Syria. Now our destiny and our challenge is to make the second prediction come true. Now we must attempt to rise upward, to make Jerusalem climb higher and higher until it reaches the very site of the divine Throne of Glory. We have achieved success in expanding Jerusalem horizontally, and now we must expand it vertically. We have stretched forth right and left, now we must rise high upward and dig deep downwards into the soul that God has given us.”

Before calling on his listeners to pray for the fallen soldiers, the victims of the recent Holocaust, and the ancestors who were not alive to witness the glory of a unified Jerusalem, Rabbi Lamm related the recent conquest of Jerusalem to the Biblical holiday of Shavuot:

“On this Shavuot, the festival of the revelation at Sinai, we thank Almighty God for His revelation of Jerusalem, for His deliverance of Zion in our day. Let us dedicate ourselves anew to the completion of the tasks that lie ahead of us. Having stretched outward, let us now reach upward.”