How Passionate Love for the Land Set a Tribe Apart 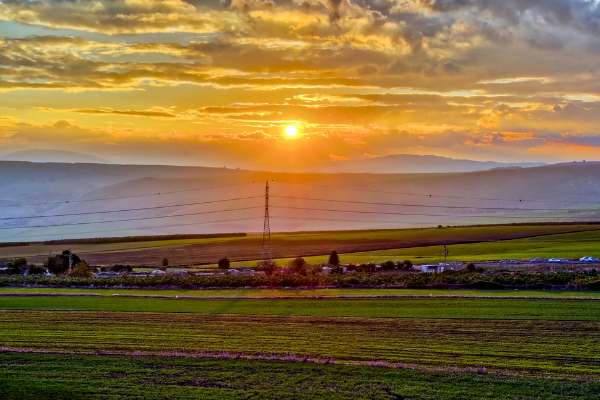 So Moshe assigned to them—to the Gadites, the Reubenites, and the half-tribe of Menashe son of Yosef—the kingdom of Sihon king of the Amorites and the kingdom of King Og of Bashan, the land with its various cities and the territories of their surrounding towns.

I had it all planned out. I told my parents I was going to hang out with friends. The story was that we were having a barbecue but the real plan was quite a bit wilder than that. I was shocked when my parents gave me their permission. I donned my stylish ripped jeans and heavy metal t-shirt and prepared to party. But just as I was about to leave, my father called me back.

“Your little brother is going with you,” he said. “He likes barbecues.”

My little brother smiled at me angelically but behind his smile, I could sense his glee at foiling my plans.

My father’s plan was taken straight from the Bible (Numbers 32). God had intended for all twelve tribes to cross the Jordan River, enter the land of Israel, and cooperate in defeating the seven nations. The portions of land would be allocated by lottery.

This, of course, upset Moses. But after being convinced that their intentions were pure and they were not rejecting the land of Israel, Moses acquiesced. Sort of.

He agreed to allow them to settle in their chosen over-the-Jordan property, but first they had to promise to take the lead in fighting the inhabitants of the land.

But then Moses told them that they had to take along their little brother. Half of the tribe of Manasseh was assigned to settle alongside them on the far side of the Jordan.

Where did Manasseh come in? They had not planned on sharing their especially fertile land with anyone else. What did Moses have in mind when he sent half of the tribe of Manasseh to accompany Reuben and Gad?

When the tribes of Reuven and Gad told Moses that they wanted to stay on the eastern bank of the Jordan River, Moses reminded them of the sin of the spies. He was concerned that they were repeating the grievous sin of despising the land. They assured him that they were not rejecting the land, nor were they shirking their responsibility to help conquer the land.

They explained their plans in detail:

“We will build here sheepfolds for our flocks and towns for our children. Numbers 32:16

Then, they assured Moses they would act as “shock troops”, not returning to their homes until the other tribes were established in their assigned regions.

Moses, in his response, gave a subtle but strong piece of advice, turning their plans around in his answer:

Build towns for your children and sheepfolds for your flocks, but do what you have promised.” Numbers 32:24

By switching around the order of what they said, Moses instructed them that caring for their families took precedence over their flock.

Reuben and Gad took the initiative to request a specific piece of land based on its assets. Their request was entirely self-motivated and based on monetary considerations. The far side of the Jordan was to be their enclave, separate from the rest of the nation. In doing so, they placed importance on their livelihood over their families and living in the land of Israel proper.

By assigning a portion on the eastern side of the Jordan to half of the tribe of Manasseh, Moses was hoping to send a message to the tribes of Reuben and Gad. He knew that the two halves of Manasseh would maintain familial ties despite the geographic separation. This would benefit the tribes of Reuben and Gad, who would also retain more of a connection to the rest of the nation, thanks to the half-tribe in their midst. And it would serve as a constant reminder to them about the importance of family.