What Can We Learn About Love of the Land from the Daughters of Zelophehad? 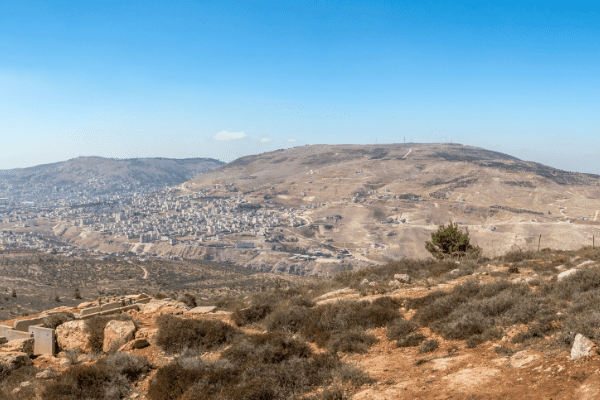 Let not our father's name be lost to his clan just because he had no son! Give us a holding among our father's kinsmen!”

I was walking past a bulletin board and saw the strangest notice:

“I lost it. I don’t know what it is or where it is. I’ve never actually seen it. Some people say that it doesn’t belong to me but I really love it. Whatever it is.”

This sounds strange but we do it all the time. We desperately want things we have never seen. Jews mourn the loss of the Temple that was destroyed 2,000 years ago. We never saw it but we know that we miss it terribly. Every year throughout the exile, at the end of the Passover Seder, Jews said, “Next year in Jerusalem”, expressing the desire to go to a city they had never seen.

And in the Torah portion of Pinchas (Numbers 25:10 – 30:1) the daughters of Zelophehad demand a piece of land they had never seen. They had no right to the land as, in those days, inheritance was passed from father to son. The Torah was explicit on that point. But their father had died without any sons and they asked that the Torah be rewritten so that they could inherit their father’s portion in the land of Israel instead.

As they had never been to the land, their love for Israel was based on promises alone. Clearly, their belief in those promises, made by God to their forefathers, and their desire to be a part of the nation was so strong that they were willing to risk it all; public humiliation, rebuke, and failure.

Indeed, these promises had remained steadfast in the hearts of the descendants of Abraham, Isaac, and Jacob, maintaining them through centuries of slavery. More promises were made at Sinai and they kept the Children of Israel moving through the desert for 40 years. All this without ever laying eyes on the Promised Land.

What is it about the land of Israel, and the Jews’ connection to it, that it persists for hundreds, even thousands of years? Where did the daughters of Zelophehad get their love for a land they had never seen?

In order to understand the daughters of Zelophehad, we must first know who they were. The Torah (Numbers 27:1) goes to great lengths to give their lineage, stating twice that they were descended from Manasseh, the son of Joseph.

Rashi notes that once we established that they were from the house of Manasseh, stating their connection to Joseph again was redundant. So why the repetition? Rashi states that this is to emphasize their love for the land of Israel. Joseph especially loved the land, as expressed in the fact that he made the Children of Israel take his bones with them out of Egypt and return them to Shechem. Though Joseph was stolen from the land and sold into slavery, he never forgot where he came from. He held onto the promise that God had made with his father, grandfather and great-grandfather, and carried his love for the land in his heart. This passion for the Holy Land was passed down to his descendants, and especially found expression with the daughters of Zelophehad.

One might cynically suggest that the passion of the daughters of Zelophehad was really for money, and that they only wanted to inherit their father’s portion of land so that they would not lose a prime piece of real estate. Rabbi Avraham Mordechai Alter, also known as the Imrei Emet, explained that the daughters of Zelophehad were indeed motivated by love for Israel and not merely for a monetary interest.

He noted that there are two traditions identifying the girls’ father. One opinion identifies him as the chopper of wood who was put to death (Numbers 15:32). Another opinion is that he was from the group who tried to force their way into Canaan after the decree of the spies (Numbers 14:40). According to both opinions, he died several decades before his daughters’ request to inherit his land. Rabbi Alter noted that if the daughters were only interested in money, they would not have waited so long to make their case. If they were making a claim on their father’s inheritance, there were other valuables and properties that would have interested them. But these were surely distributed after his death 38 years earlier, well before the daughters of Zelophehad gathered up their courage to approach Moses and ask for his piece of land. They were not interested in those properties. Their only interest was in the land, a portion in the holiest place on earth. Even though they had never seen it. Even though no Jew (other than the spies) had set eyes on it for over two centuries.

The love that had burned in Joseph’s heart made its way into the hearts of his children and grandchildren, and gave these women the strength and courage to approach Moses and demand that they not lose their beloved piece of land.

This passion for Israel is remarkable but not exceptional. A person from any other country, after he emigrates or is driven from his land, will move on and establish himself somewhere else. Certainly his children, born in a foreign land, will adopt a new nationality. They may look upon their father’s longing for “the old country” as nostalgia. But they will certainly not have a burning passion to return to a land that is their birthright due to a 4,000-year-old promise.

But the love for Israel is something very different. Just as the daughters of Zelophehad yearned for a place in the land of Israel, for 2,000 years, while the Jews have been wandering in exile, they have yearned to belong to the land. How many times a day do Jews pray to be returned to their land? On how many special occasions throughout the year do they remember the promise of the land? And like it did for the daughters of Zelophehad, that promise connects to their souls and fuels their deep desire to live in the promised land.