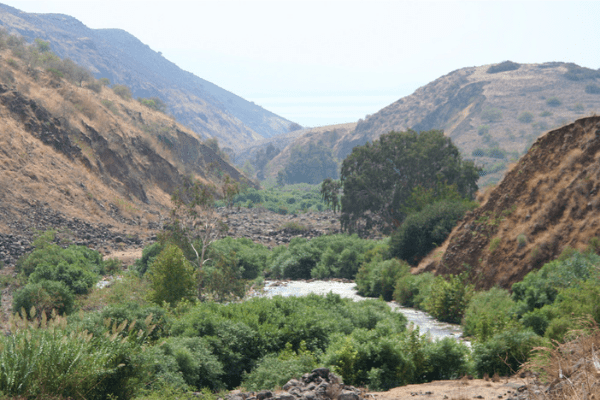 When they came to Goren ha-Atad, which is beyond the Yarden, they held there a very great and solemn lamentation; and he observed a mourning period of seven days for his father.

When Jacob passes away, Joseph requests permission from Pharaoh to travel to Israel to carry out his oath to his father to bury him in Hebron. All of the dignitaries from Egypt join Joseph and his brothers as they travel to Israel, though the children and flocks remain in Goshen.

But before going to Hebron, the procession stops for seven days in Goren ha-Atad, literally ‘the threshing floor of the brambles,’ on the other side of the Jordan, which is usually understood as meaning the eastern side of the river.

Rashi suggests the name is due to brambles that surrounded the threshing floor. An alternative explanation given by Rashi suggests that the kings of Canaan and the Ishmaelite princes came to war with the arriving party, but when they saw the crown of Joseph on his father’s coffin, they chose to hang their crowns on the coffin as well as a sign of respect to Jacob. Rashi explains that the crowns were like a fence of thorns on the coffin.

In his commentary on the bible called Chidushei Yitzchak ben Pinchas published in 1850, Rabbi Yitzchak ben Pinchas Berman wrote that there were two locations known as Goren ha-Atad. One was in the western part of Israel near where the Philistines lived at the edge of the Mediterranean Sea. The other was in the eastern part of Israel near Hebron, close to the Jordan River.

Prof. Yoel Elitzur,  a researcher of the Hebrew language and biblical and historical geography at Hebrew University, notes that the route leading from Egypt to Hebron does not pass through the eastern shore of the Jordan River. The professor cites several attempts to explain this geographic conundrum.

He notes that in 1960, Yehuda Ziv suggested that the reference to Jordan as the location of Goren ha-Atad described a location in southwest Israel and not the river. Prof. Elitzur was unsatisfied with this explanation, noting that it was unlikely that two locations in Israel, one a river and the other not, bore the same name.

Prof. Elitzur presents a theory credited to his father, Prof. Yehuda Elitzur. He noted that the procession to Israel was actually composed of two separate groups; the large group of Egyptian officials, and the smaller group of the House of Jacob. Prof. Elitzur suggested that the Egyptian officials had a dual purpose. They were sent to  replenish the Egyptian garrisons in Canaan, the most prominent of which were located in Beit Shean and Gaza. At the same time, they joined the entourage in mourning Jacob. The entire group stopped in Goren ha-Atad, probably located in the vicinity of Beit Shean, in order to mourn and eulogize Jacob for seven days. From there, the family continued on to Hebron in order to bury their father, while the Egyptian officials continued on their military mission. 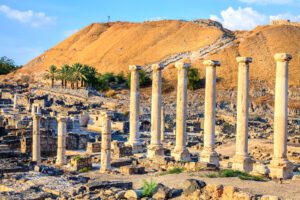 This is supported by the continuation of the mourning of Jacob which, according to verse 11, was witnessed by the Canaanites, indicating that the mourning took place inside Canaan.