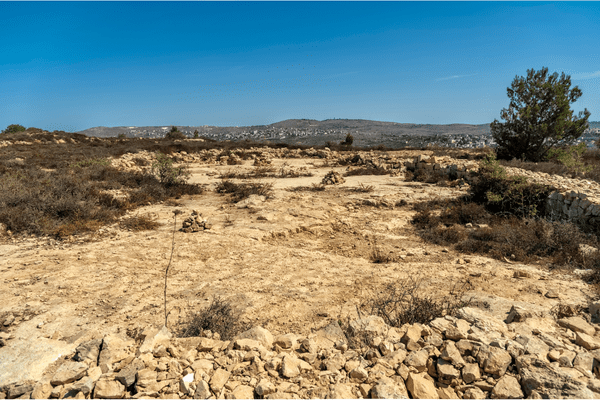 Thus Yaakov came to Luz—that is, Beit El—in the land of Canaan, he and all the people who were with him.

The Biblical account of Jacob’s first encounter with God is an amazing story. He dreams of a ladder connecting heaven and earth, with angels ascending and descending the ladder. Understandably shaken, Jacob declares that the site where the encounter occurs is the “gateway to heaven” (Genesis 28:17). Though Jacob appropriately names the location Bet El (the house of God) (Genesis 28:19), its precise location is ambiguous and several commentators associate it with the Temple Mount in Jerusalem.

In passing, the Torah mentions the location’s previous Canaanite name: Luz (Genesis 28:19). Similarly, after Jacob’s return to Israel, God calls on Jacob to ascend to Beit El (Genesis 35:1). But when Jacob fulfills God’s command and goes the Beit El, the Bible again refers to the city but its Canaanite name Luz:

Thus Yaakov came to Luz—that is, Beit El—in the land of Canaan, he and all the people who were with him (Genesis 35:6).

What is the significance of this city?

The city of Luz is also mentioned in the Book of Judges (1:23). In that account, a man from Beit El, which the Bible again says was previously named Luz, is coerced by scouts from the army of the tribe of Joseph into revealing the hidden entrance to the city. The city was destroyed and its inhabitants killed, but the informant and his family went on to found a new city named Luz in the Hittite country.

Jewish tradition fills in some of the missing information about this mysterious place named Luz. The sages describe the hidden entrance to the city of Luz/Beit El. A hollow luz tree stood at the entrance to a cave. In order to enter, one had to climb into the tree, from the tree into the cave and from the cave into the city itself.

The Talmud (Sota 46b) tells us even more about Luz. Remarkably, Luz is described as the city where the angel of death had no power!:

“The Angel of Death has no permission to pass through it. But the elderly [in the city of Luz], when their mind is done with them [and they want to die], go beyond the wall [of the city] to perish”

The city’s mystical power over death is hinted at in its aramaic name, Qushta meaning “truth”. It was so named because its inhabitants never lied and, therefore, never died before their time (Babylonian Talmud, Sanhedrin 97a).

In addition to the city, the word Luz also refers to a miniscule bone from the spine, about the size of a grain of barley and almost cubic in shape. Located at the base of the skull where the knot of the head tefillin rests, Jewish tradition claims that this bone can never be destroyed and receives nourishment from the meal eaten on Saturday night after the Sabbath ends (known as melave malka). Just as the angel of death has no power in the city of Luz, death has no power over the luz bone!

According to tradition, the spot on the neck where this bone is located is the same part of God’s neck that Moses saw when requested to see God’s face but was only allowed to see His back (Exodus 33:17-23). Other commentators, however, believe that the luz bone is located at the bottom of the spine; the tailbone, known to modern scientists as the coccyx.

The Jewish source for the luz bone is in Bereishit Rabba, a collection of homiletical teachings from the third century, which states (28:3):

“(Roman Emperor) Hadrian was grinding bones. He asked Rabbi Yehoshua ben Chananiah: ‘From where does the Holy One, Blessed be He, reconstruct man in the future to come?’ He answered him: ‘From the Luz of the spine.’ Said he: ‘From where do you know this?’ He said: ‘It has come to me (as a tradition), and I will show you.’ They tried to grind it in a mill but it was not ground, they burnt it in fire but it was not consumed, they put it in water but it was not softened, they put it on an anvil and he started to beat it with a hammer but the anvil slipped, the hammer was broken and it remained intact.”