The Blessing of the New Month 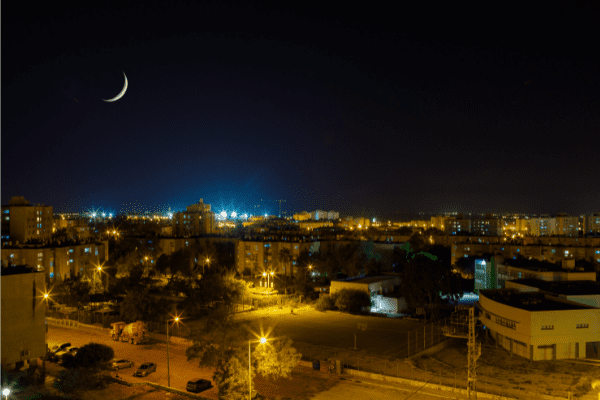 And new moon after new moon, And Shabbat after Shabbat, All flesh shall come to worship Me —said Hashem.

The Shabbat which precedes Rosh Chodesh (new month), the beginning of a Hebrew month, is referred to as Shabbat Mevorchim, or the Shabbat when we bless. On this Shabbat a special prayer is recited after the Torah is read but before the Torah scroll is returned to the ark, in which we ask God to bless the new month and “inaugurate the new month upon us for goodness and blessing.”

Customarily, the time and day of the molad, the projected time of the birth of the new moon, are announced. This addition to the synagogue service is reminiscent of the sanctification of the new moon/month by the Sanhedrin in Jerusalem in Temple times. 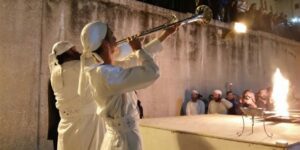 The new month is announced on Shabbat because the entire congregation is gathered in the synagogue and everyone will hear when Rosh Chodesh will take place. Furthermore, all the days of the week receive blessings from Shabbat, and even the sanctity of Rosh Chodesh flows from the Shabbat that precedes it. Therefore, we bless the new month on that day.

The cantor or prayer leader recites the prayer while holding the Torah scroll. The translation of the text is as follows:

May He who performed miracles for our fathers and redeemed them from slavery to freedom, speedily redeem us and gather our dispersed people from the four corners of the earth, uniting all of Israel, and let us say, Amen. (Amen)

Rosh Chodesh (name of month) will be on (day(s) of week), which come(s) to us for good.

May the Holy One, blessed be He, renew it for us and for all His people, the house of Israel, for life and peace (Amen), for gladness and for joy (Amen), for deliverance and for consolation, and let us say, Amen. (Amen)

If the day following Shabbat is Rosh Chodesh, a special haftarah (reading from the Prophets thematically linked to the Torah portion) called Machar Chodesh (tomorrow is the [new] month) from I Samuel 20:18-42 is read. If Shabbat itself falls out on Rosh Chodesh, both a special maftir (the final section of the Torah read) and haftarah (Isaiah 66) are read, along with Hallel (prayer of thanksgiving composed of Psalms 113-118) and a special Mussaf (special service reminiscent of the additional sacrifices brought in the Temple).

There is a custom that women make an extra effort to attend synagogue to hear and recite this prayer. This custom is based in the connection made in mysticism that women are more closely related to the aspect of malchut (royalty) that is represented by the moon and its monthly cycle.

Rosh Chodesh is a special time for the Jews and in the times of the Temple was considered a minor holiday. The Israel Bible explains:

The Sages teach that the moon is a symbol of the People of Israel. Just as the moon waxes and wanes, appearing tiny when it is new but large by the middle of the month, the Children of Israel follow a similar cycle. Though at times they are a small and downtrodden nation, they will again become great in the eyes of all. In our era, with the establishment of the State of Israel, we are beginning to see the truth of this statement. When the world is ultimately blessed with the Mashiach, from the house of David, the light from the People of Israel will shine its brightest, originating in the Land of Israel and illuminating the entire world. 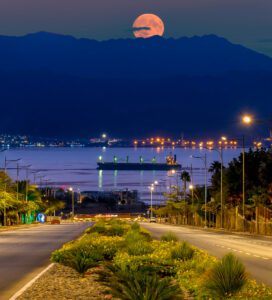