How is the Plagues of the Firstborn Different from all the Other Plagues? 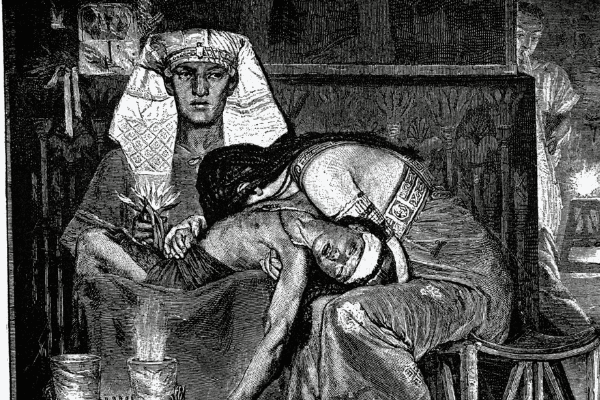 The final plague that struck Egypt was exceptional in several respects.  It hit both man and animal and, for the first time, a plague killed people outright. Unlike the other plagues which left the Jews untouched, the Jews were required to paint their doorposts with the blood of the Passover sacrifice and to stay in their houses in order to avoid the effects of this plague.

The Zohar Chadash offers an interesting explanation as to why this plague required preparations by the Hebrews. The angel of death tasked with carrying out the plague (the Mashchit) reasoned to God that since the Jewish people fell to the lowest levels of spiritual degradation in Egypt, they were no less deserving of punishment than the Egyptians. It was the bringing of the Passover offering which gave the Hebrews enough merit to avoid death. 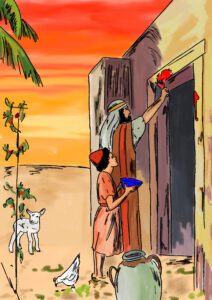 Sprinkling blood on the doorposts (Shutterstock.com)

This plague is also the only plague commemorated to this day. On the day before Passover, firstborn Jewish men fast  “in commemoration of the miracle that they were saved from the Plague of the Firstborn” (Talmud Soferim 21:3).

The horror of the plague should have been anticipated. At their first encounter at the burning bush, God told Moses that He intended to slay the firstborn of Egypt. God even explained the meaning behind the plague (Exodus 4:22-23):

Then you shall say to Pharaoh, ‘Thus says Hashem: Yisrael is My first-born son. I have said to you, “Let My son go, that he may worship Me,” yet you refuse to let him go. Now I will slay your first-born son.’”

Based on these verses, the Sages teach that initially, when God sought to bring the plagues upon Egypt, He intended to commence with the death of the firstborn. This changed in reaction to Pharaoh’s insolence towards Moses and Aaron, leading to additional plagues being brought onto Egypt.

According to the Midrash, this plague brought with it an unexpected side effect. Every household in Egypt was struck. In some cases, two sons from one mother would die even though only one was the firstborn. It was thus revealed that the second son was killed because he was the firstborn to a man who was not the mother’s husband. In this manner, the infidelities of the Egyptian women were revealed for all to see.

The plague of the firstborn cannot be explained away as the result of an extreme natural phenomenon, but some scientists have tried. In the journal Clinical Microbiology Reviews epidemiologist John Marr suggested that an algal bloom turned the Nile blood red. The algal bloom released mycotoxins, poisonous substances that can cause disease and death in humans, were absorbed into grain that grew alongside the river. The firstborn might have been the first to pick the grain, and thus would have fallen victim to it first as well.

Microbiologist Siro Trevisanato, author of The Plagues of Egypt: Archaeology, History and Science Look at the Bible, suggested a different scenario. He theorized that winds carried volcanic ash to Egypt from a volcanic eruption on the island of Santorini in the south of Greece around 1620-1600 BCE. The ash led to a series of natural catastrophes. He believes that, amid all this destruction, firstborn children could have been sacrificed out of desperation, in the hopes that such a meaningful sacrifice would lead their gods to stop punishing them.