Can we Bring the Passover Sacrifice Today? 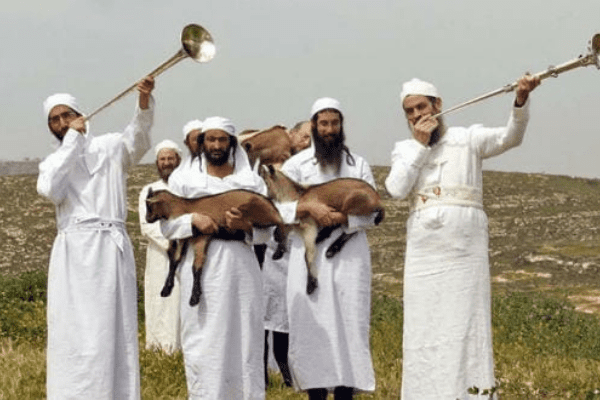 you shall say, ‘It is the Pesach sacrifice to Hashem, because He passed over the houses of the Israelites in Egypt when He smote the Egyptians, but saved our houses.'” The people then bowed low in homage.

While still in Egypt, the Children of Israel were commanded to perform the ritual sacrifice of a lamb on the eve of the Exodus from Egypt. Unlike later Passover sacrifices that were slaughtered in one central location, the first Korban Pesach in Egypt was sacrificed in each household. Also, the first korban Pesach did not separate the organs to be burnt on the altar as was the case in later Passover sacrifices. The blood of this first Passover sacrifice was sprinkled on the door-posts of the Israelites as a sign to God, when passing through the land to slay the first-born of the Egyptians that night, that He should pass by the houses of the Israelites. The families were warned to remain in their houses that night. Like later Passover lambs, the sacrifice was consumed on the first night of the holiday with bitter herbs and matzo.

This Passover sacrifice was to be repeated in perpetuity (Exodus 12:24-27). There was a notable lag in this rule. According to Rashi (Numbers 9:1), only once during their forty years of wandering in the wilderness, one year after the Exodus, was the sacrifice offered. For the next 39 years there was no offering, as God stipulated that it could only be offered after the Children of Israel had entered the Land of Israel. In fact, the bringing of the Passover sacrifice resumed only after the Israelites had taken possession of the land, and then the sacrifice was made annually during the times when Solomon’s Temple and the Second Temple stood and functioned. 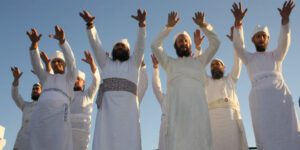 The sacrificial animal was either a lamb or goat, had to be a male, one-year-old, and without blemish.  Each family or group offered one animal together. Only those who were part of the nation of Israel, circumcised and purified might participate, and they were forbidden to have leavened food in their possession during the act of killing the Passover lamb. The animal was slain on the eve of the Passover, on the afternoon of the 14th of Nisan, in the courtyard of the Temple in Jerusalem.

The lamb must be checked for blemishes before being slaughtered.  As in the Temple, the priests arranged themselves in a line stretching from the courtyard in which the lamb was slaughtered all the way to the altar. The blood from the lamb was collected in a vessel and then passed from one priest to another, hand over hand, until it arrived at the altar upon which it was poured.

The lamb was then hung upon special hooks or sticks and skinned; but if the eve of the Passover fell on a Sabbath, the skin was removed down to the breast only. The abdomen was then cut open, and the fatty portions intended for the altar were taken out, placed in a vessel, salted, and offered by the priest on the altar, while the remaining entrails likewise were taken out and cleansed. 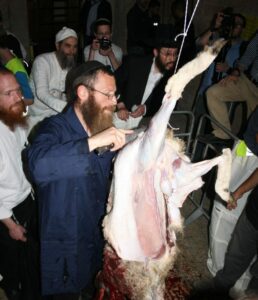 The Passover offering is prepared for the altar. (Adam Propp)

When the sacrifice was completed and the animal was ready for roasting, each one present carried his lamb home, except when the eve of the Passover fell on a Sabbath, in which case it might not be taken away. They took their lambs home and roasted them on a spit of pomegranate wood. No bones of the animal could be broken either during cooking or during eating. The lamb was set on the table at the evening banquet and was eaten by the assembled company after all had satisfied their appetites with the holiday offering or other food. The sacrifice had to be consumed entirely that same evening, nothing was allowed to remain overnight. The entire company of those who partook was obliged to remain together, and every participant had to take a piece of the lamb at least as large as an olive, in order to fulfill the commandment.

The Korban Pesach is of utmost importance. There are only two mitzvot (Biblical commandments) for which non-compliance receives the most severe punishment mandated by the Torah, karet (being cut off from the community): brit milah (circumcision) and the Korban Pesach (Passover sacrifice).

Since King David first established the Temple Mount as the location of the Temple, Jews are forbidden from sacrificing in any other location. An actual Temple structure is not necessary though an altar of uncut stones is. The lack of a red heifer means that all of Israel is ritually impure, however public offerings (like the Korban Pesach) that are time-bound are permitted to be brought in a state of impurity. For this reason, there is a movement in Israel to reinstate the Passover offering today.