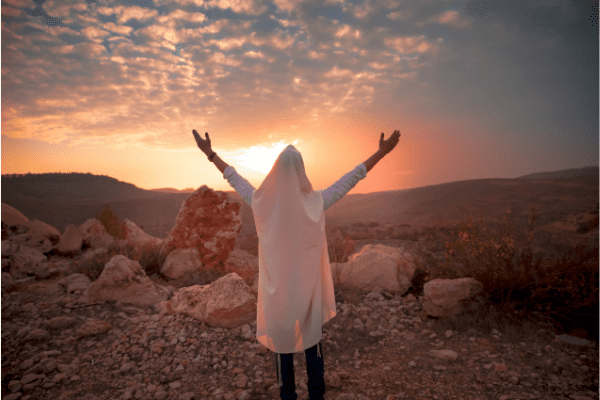 Hashem passed before him and proclaimed: “Hashem! Hashem! a Hashem compassionate and gracious, slow to anger, abounding in kindness and faithfulness,

After the Children of Israel sinned with the Golden Calf, Moses ascended Mount Sinai and pleaded with God to forgive them. His pleas were successful so Moses considered it an auspicious time to ask God for a way to ensure forgiveness for future generations. God assented, passing before him and revealing the Thirteen Attributes of Mercy which were expressed in the following verses:

Hashem passed before him and proclaimed: “Hashem! Hashem! a Hashem compassionate and gracious, slow to anger, abounding in kindness and faithfulness, extending kindness to the thousandth generation, forgiving iniquity, transgression, and sin; yet He does not remit all punishment, but visits the iniquity of parents upon children and children’s children, upon the third and fourth generations.” Exodus 34:6-7

The Talmud (Rosh Hashanah 17b) relates that after Israel sinned, Moses felt that Israel’s sin was so serious that there was no possibility of intercession on their behalf. At this point, God appeared to Moses and taught him the Thirteen Attributes, saying: “Whenever Israel sins, let them recite this [the Thirteen Attributes] in its proper order and I will forgive them.” The Talmud is teaching that repentance is always possible and that God simply awaits our return.

Furthermore, Rabbi Yehudah states that “a covenant was established regarding the Thirteen Attributes of Mercy that they will never be returned empty-handed.”

Jewish mysticism explains the significance in numerical terms. The number 12 signifies constraint and order as expressed in the 12 zodiac signs and the 12 months that make up a year. 13 takes this one step further, signifying the infinite. The fact that there are 13 Attributes of Mercy teaches us that when God shows mercy, He does so without limit.

This is further demonstrated in the word echad (אחד), meaning ‘one’, which has the numerical value of 13 (ד=4 / ח=8 / א=1). This signifies that by His oneness in the world, God is beyond any measure and limitation.

It is interesting to note that in Hebrew the word for mercy, rachamim (רחמים), is derived from the root rechem (רחם) meaning ‘womb.’ Mercy is not intended to erase the sin. It is a nurturing process that returns the penitent to his source where he can heal.

There are many different traditions explaining the meaning of each attribute however this is one version:

YHVH – I am God before people sin

YHVH – I am God after people sin if they repent

V’khata’ah – sins made by mistake

Jewish mysticism maintains that these 13 attributes are repeated by the Prophet Micah on an even loftier plane than the ones that were given to Moses:

Who is a Hashem like You, Forgiving iniquity And remitting transgression; Who has not maintained His wrath forever Against the remnant of His own people, Because He loves graciousness! He will take us back in love; He will cover up our iniquities, You will hurl all our sins Into the depths of the sea. You will keep faith with Yaakov, Loyalty to Avraham, As You promised on oath to our fathers In days gone by. Micah 7:17-20

Micha concludes his prophecies by declaring his belief in God’s loyalty to His people and His land. This verse echoes the thirteen attributes of mercy that God presented to Moshe after the sin of the golden calf (see Exodus 34:5-7). By recalling these attributes, the prophet also expresses his confidence in the people’s ability to repent and return. He is certain that in the future, they will be deserving of forgiveness and restoration to their land. Hashem will trample the sins of Israel underfoot and cast them into the sea, just as He cast Pharaoh’s chariots to the bottom of the sea so many years earlier.

These Thirteen Attributes of Mercy still play an essential role in Jewish devotion today. Jews recite them as part of Tachanun, a confessional prayer recited twice daily as part of the prayer service. They are also recited on fast days and the days leading up to the High Holidays. And the thirteen attributes are repeated many times during Yom Kippur, the Day of Atonement.