Why do we light candles for eight nights of Hanukkah? 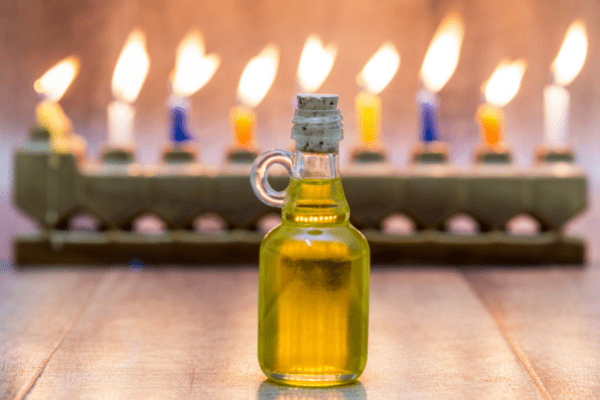 The holiday of Hanukkah is most famously identified with the story of the miracle of the single cruse of pure olive oil that burned for eight days. The story of Hanukkah does not appear in the Bible but it is told in the Talmud (Shabbat 21b).

The story begins in approximately 200 BCE, when Antiochus III, the Seleucid king of Syria, took control over the kingdom of Judea. When his son, Antiochus IV, replaced him, he tried to unify his kingdom by prohibiting the Jews from practicing Judaism and commanded them to worship Greek gods. About one-third of the Jews accepted Greek customs and idolatry and became Hellenized. In 168 BCE, Antiochus IV invaded Jerusalem and erected an altar to Zeus in the Jewish Temple. Gradually, the Greek overlords began to outlaw more Jewish practices, beginning with Shabbat and moving on to circumcision. Observing Jewish law was punished with death.

This sparked a revolt by the Hasmoneans, or Maccabees, led by Matityahu, a priest from Modiin, and his five sons: Yohanan, Simeon, Yonatan, Judah, and Eleazar.

After two years of rebellion, the Maccabees led an army of about 6,000 and were able to eject the larger Greek army composed of about 50,000 soldiers. Upon retaking Jerusalem, the Hasmoneans rededicated the Temple on the 25th of Kislev, which required lighting the Menorah. The Greeks had stolen the original golden Menorah, so the Hasmoneans cast a new one from iron. But the Greeks had rendered all of the oil ritually impure. Finally, one small cruse was found with the seal of the Kohen Gadol (High Priest) intact, but it was only enough for one day. Making new oil fit for use in the Temple would require eight days. Miraculously, the single cruse of oil lasted eight days while the new oil was being made. For all those eight days, the Children of Israel celebrated the rededication of the Temple (‘Hanukkah’ means dedication). 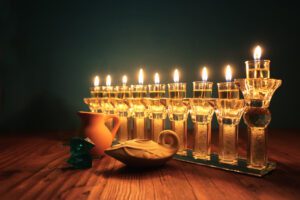 There is a significant dispute in the Talmud concerning the lighting of the candles. According to Beit Hillel (the students of the sage known as Hillel), one candle is lit on the first night and an additional candle is added each night, according to how many days of the holiday have passed. According to Beit Shammai (the students of the sage known as Shammai), eight candles are lit on the first night and the number is reduced each night, reflecting how many nights of the holiday remain. Many scholars understand the approach of Beit Hillel to be based in the concept of “Ma’alin Ba’Kodesh ve’ayn Moridin” (increasing in matters of holiness, and not diminishing). Beit Shammai is following the precedent set by the offering of bulls in the Temple on Sukkot (Feast of Tabernacles) which begins with 13 on the first day and decreases each day, finishing the holiday with an offering of seven on the seventh and final day of the holiday. As in most disputes between Hillel and Shammai, the practical aspect of the law follows the opinion of Beit Hillel.

The obvious difficulty of claiming that the eight days of light was a miracle is that the first day of light was certainly consistent with the laws of nature. Following this line of reasoning, the Hasmonean menorah did indeed burn for eight days but only the last seven days should be celebrated as a miracle. Rabbi Joseph Karo, the 15th Century codifier of Jewish law, asked this question. Many have tried to answer this difficult question though no definitive answer has ever been given.  Rabbi Rachmiel Zelcer wrote the book Ner L’Meah (candle for one hundred) in 1975 to try and present 100 answers in an organized manner.  Rabbi David Weiss produced another book in 2019 in Hebrew presenting 1,000 possible answers to Rabbi Karo’s question. One of the answers suggests that one candle was added to commemorate the military victory which was also miraculous. Another answer suggests that since the dedication of the Temple was to last eight days, the Hasmoneans initially divided the oil into eight parts and the miracle was that this quantity sufficed for each day. Another opinion suggested that the entire quantity of oil was poured into the menorah on the first day and when the morning arrived, the quantity did not diminish, hence making the first day as miraculous as the last. Another opinion holds that a candle was added for the miracle of finding the sealed cruse of pure oil.

Another opinion holds that the eight-day miracle was, in fact, a double miracle. Had the oil lasted for seven days, commemorating the miracle would have led the Jews to violate the prohibition of duplicating the Temple Menorah which has seven branches. It is forbidden to create or light a seven branched menorah outside of the Temple. 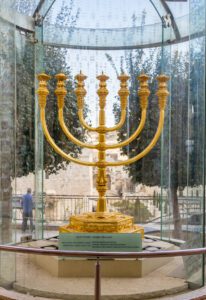 Replica of the Temple Menorah in Jerusalem (Shutterstock.com)