The Status of the Priests, Then and Now 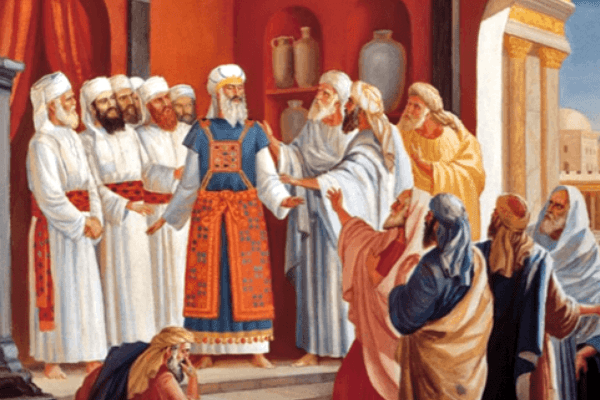 Put the sacral vestments on Aharon, and anoint him and consecrate him, that he may serve Me as Kohen.

After the sin of the Golden Calf, the tribe of Levi is chosen to serve in the Temple instead of the firstborn as they did not participate in the sin. Aaron is chosen to be the High Priest, and Moses anoints his brother and his brother’s sons. With this, the social caste of the priesthood is established forever as an everlasting covenant, passed down from father to son.

Put the sacral vestments on Aharon, and anoint him and consecrate him, that he may serve Me as Kohen. Then bring his sons forward, put tunics on them,and anoint them as you have anointed their father, that they may serve Me as Kohanim. This their anointing shall serve them for an everlasting priesthood throughout the ages. Exodus 40:12-15

They immediately began performing the Temple service and continued to do so until the Second Temple was destroyed approximately 1,300 years later. Though it was a great privilege and joy to serve in the Temple, being a priest meant not receiving a portion of land in Israel. However, the position also brought certain benefits, such as receiving a portion of the tithes which were only permitted to the priests and Levites and their immediate families.

King David assigned each of the 24 priestly clans to a weekly watch during which its members were responsible for maintaining the schedule of offerings at the Temple. This cycle of priestly watches repeated itself roughly twice each year. Each of the 24 groups consisted of six priestly families, with each of the six serving one day of the week. On the Sabbath day, all six worked in tandem. However, on the biblical festivals, all 24 were present in the Temple for duty.

Kohanim (priests) were eligible to serve when they reached maturity, though they were generally discouraged from doing so until the age of 20. There was no mandatory retirement age but when a kohen became physically infirm could he no longer serve.

In every generation when the Temple was standing, one kohen would be chosen to perform the functions of the High Priest (Hebrew Kohen Gadol). His primary task was the Yom Kippur (Day of Atonement) service. Another unique task of the High Priest was the offering of a daily meal sacrifice; he also held the prerogative to supersede any priest and offer any offering he chose. 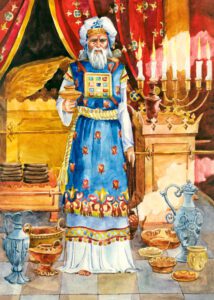 Illustration of the High Priest wearing his eight garments (Shutterstock.com)

To this day, the descendants of Aaron are recognized in Jewish communities around the world, even though there has not been a Temple for two millennia. Kohanim are honored with the first aliyah (section of the Torah reading), the Levites are honored with the second and Israelites for the rest. If there is no Levite, the kohen is called for the second aliyah as well. When a kohen is buried, his status is engraved on his gravestone.

The Kohanim also deliver the priestly blessing during the repetition of the Shemoneh Esrei, the 18 benedictions recited daily. A kohen also performs the pidyon haben, or redemption of the firstborn, ceremony. 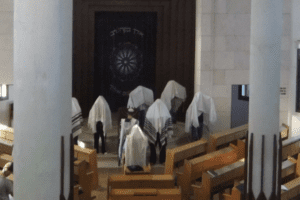 The priestly blessing at a synagogue in Ofra (Wikimedia Commons)

Kohanim are prohibited from marrying divorced women or converts to Judaism. A kohen must be born to a kohen father and a Jewish mother. They are also forbidden from coming into contact with the dead, or from entering cemeteries.

Geneticists have verified the link which connects the present-day group of men classified as kohanim to the Biblical figure of Aaron who lived over 3,000 years ago. Demographic studies have shown that kohanim have always represented approximately five percent of the total Jewish population. According to Jewish law, Jewish identity is determined by the religion of the mother, but the priestly designation and tribal identity have always been determined by the father. Since the designation of being a Levite or kohen is passed from father to son, the gene is found on the Y chromosome, which is inherited only from the father.

But the levitical Kohanim descended from Tzadok, who maintained the service of My Sanctuary when the people of Yisrael went astray from Me—they shall approach Me to minister to Me; they shall stand before Me to offer Me fat and blood—declares Hashem. Ezekiel 44:15

According to Jewish tradition, Elijah the prophet will appear before the Messiah to clarify precisely this issue: who is a priest and who is not, and the tribe to which each Jew belongs.