The Ritual Bath: A Spiritual Rebirth 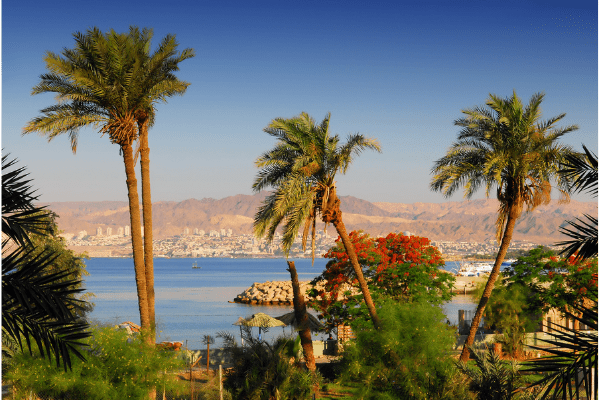 The one to be cleansed shall wash his clothes, shave off all his hair, and bathe in water; then he shall be clean. After that he may enter the camp, but he must remain outside his tent seven days.

In modern times, we rarely think of the state of our spiritual purity. We can go into a synagogue, travel where we want, handle fruits and vegetables and sit on any chair without thinking about the spiritual ramifications. But in ancient Israel, when the Temple stood, this was not the case. Since entering the Temple and handling items that were sanctified required being in a state of spiritual purity, everyone had to be acutely aware of their spiritual status. Just as a surgeon is scrupulous about sterilizing his tools and his hands, donning a mask and gown in order to guard against unseen pathogens, Jews were scrupulous about their spiritual state.

There were certain situations that rendered a person spiritually impure such as coming into contact with a dead body, contracting tzaraat (a spiritual malady that presents like leprosy) and menstruation. In order to become pure again, a person would have to go through a process of spiritual purification which usually included a dip in the mikveh, or ritual bath, making the natural pool of water a regular part of their religious life. Hence, ancient mikvaot are found in archeological sites all over Israel. 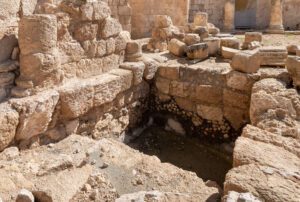 A mikveh in the courtyard of the palace of King Herod, Herodion (Shutterstock.com)

When looking for the deeper meaning of this important ritual, the simple meaning may reveal the deepest meaning. Mikveh is derived from the root of the Hebrew word tikvah or ‘hope’. A simple pool of living water brought hope of rebirth. Diving into a pit in the ground in which you can’t breathe, emerging wet and naked, mimics the experience of birth.

When bathing in the mikveh, it is essential that nothing come between the person and the water. The person’s entire being is revealed and purified. The shock of being immersed in water, an unnatural state for a human, resets our reality, giving us hope that we can become purified and able to approach God.

For this reason, mikveh is an essential part of the conversion process. The convert is born anew in a higher spiritual state. Similarly, when the Children of Israel came out of Egypt they passed through the Reed Sea. The most obvious reason for this was to distance them from the Egyptian army. But this also acted as mikveh as the nation passed through the living waters. After hundreds of years of living in Egypt, surrounded by idolatry, returning to the Holy land required a spiritual cleansing. 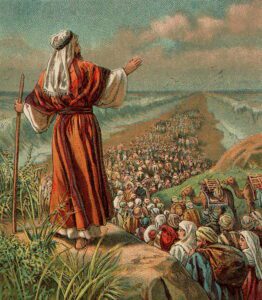 The Israelites crossing the Red Sea

Though we do not currently have a Temple and the laws of purity and impurity are not currently relevant, the mikveh still holds an essential place in every Jewish community. For example, the laws of Niddah (family purity) requires women to bathe after their menstrual cycle, sanctifying the physical manifestation of the love that exists between husband and wife. In the absence of the Temple, the family becomes the central aspect of Israel’s service to God. The home becomes the “Temple”, with the husband and wife standing as the Cherubim on the Ark of the Covenant. Just as purity was essential to approach God in the Temple, purity is the basis for the relationship between the husband and wife. 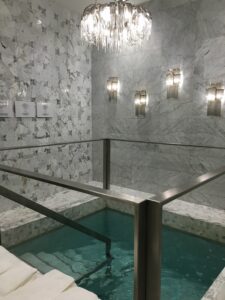 Before the wedding ceremony, the bride and groom fast and enter the mikveh in preparation for becoming a new entity; two people with one soul, serving God in the highest manner.

Scribes also make extensive use of the mikveh, bathing before writing the ineffable name of God. The task requires a level of purity and intention. Though the casual observer would never be able to discern from the text whether the scribe did so, the scribe, immersed in the words of the Torah, can feel his own spiritual state.

Many Hassidic men have taken on the practice of going to the mikveh. Some bathe before Shabbat, wanting to enter the holiest of day of the week in a state of purity. Most will enter the mikveh before the holy days. And there are even some who go daily. The mikveh is widely used before Yom Kippur, the Day of Atonement, when even the average Jew will feel the need to purify himself.

Hassidic masters have taught the importance of the mikveh based on the Jewish law that a clay vessel that has become impure cannot be purified as it is. It must be broken in such a manner that it can no longer be used for its previous purpose and then immersed in a mikveh. The shards can then be used for a different purpose. This can be understood as an analogy for Man who was formed from dust. We cannot be purified unless we are broken, feel remorse, and rededicate ourselves, rendering ourselves unable to be what we were when we initially sinned. After that, the rebirth in the living waters, and the hope that is the mikveh, will open up the person to serve God in a new and renewed manner.