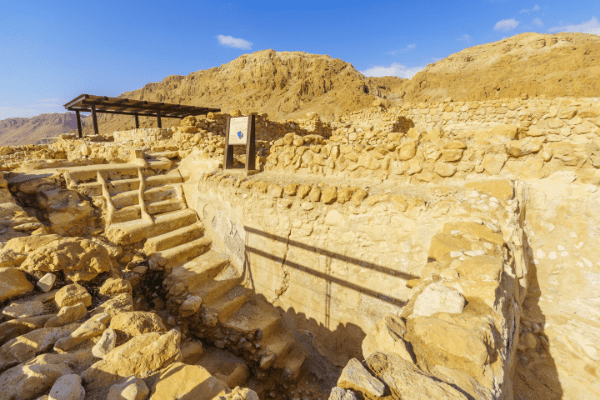 However, a spring or cistern in which water is collected shall be clean, but whoever touches such a carcass in it shall be unclean.

After outlining which animals are permitted to be eaten, the Torah teaches that coming into contact with the carcasses of non-kosher animals is forbidden and renders a person impure (Leviticus 11). The Torah describes the process to remove the impurity which includes the passage of time and washing. The Torah makes mention of a specific type of water as being pure, i.e. “a spring or cistern in which water has been collected” (Leviticus 11:36).

This short reference delineates two types of water sources: a spring, maayan (מַעְיָן), and a cistern bor (בּוֹר), both of which fall into the ambiguous category described by the term mikveh mayim (מִקְוֵה־מַיִם), translated as “in which water is collected”. Mayim means simply water, but it is interesting to note that the Hebrew word mikveh, translated as “is collected”, is derived from the root of the Hebrew word for hope.

Water is an integral part of the ritual purification process, and a ritual bath used for purification is known as a mikveh. The Midrash relates that after being banished from Eden, Adam sat in a river that flowed from the garden. This was an integral part of his teshuvah (repentance) process, of his attempt at return to his original perfection. Another midrash relates that in the desert, the famed “well of Miriam” served as a mikveh. And Aaron and his sons’ induction into the priesthood was marked by immersion in the mikveh.

Ritual purity was a part of every Jew’s daily life in ancient Israel. As such, the remains of ancient mikvehs are found throughout Israel. 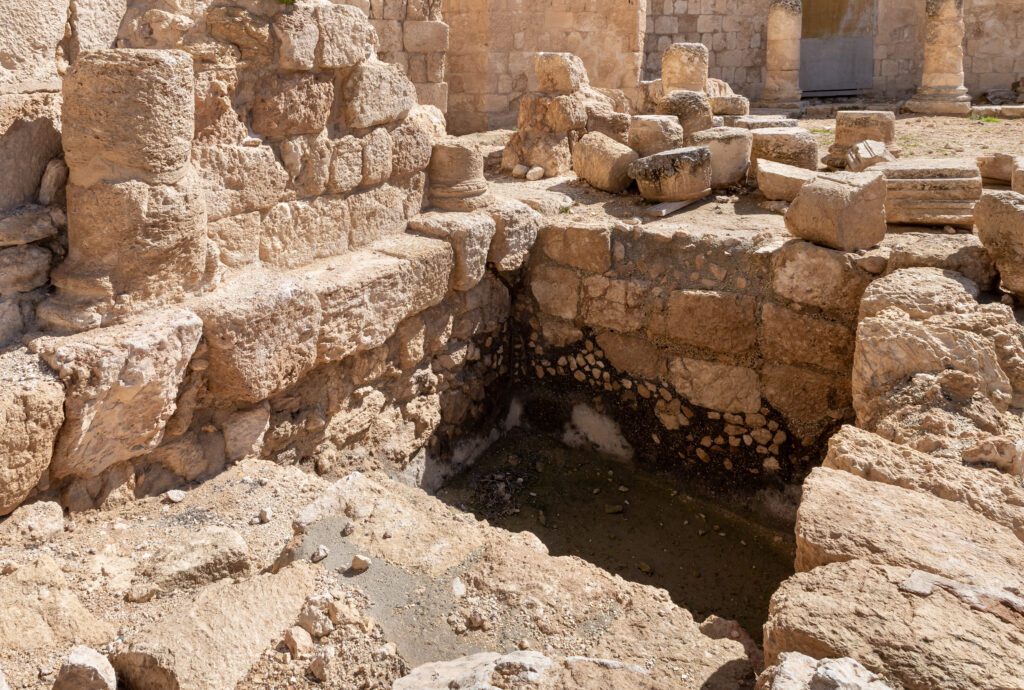 A mikveh in the courtyard of the palace of King Herod, Herodion (Shutterstock.com)

Immersion in a mikveh is also an integral part of conversion to Judaism. Additionally, it is used for the immersion of new pots, dishes and utensils before they can be used by a Jew. The mikveh concept is also the focal point of the taharah, the purification rite of the Jewish dead. The manual pouring of water in a highly specific manner over the entire body of the deceased serves this purpose. There is a tradition that a groom enters a mikveh on his wedding day and every man goes to the mikveh before Yom Kippur, the Day of Atonement. Many Hasidic men use the mikveh before each Shabbat and holiday, some even making use of mikveh each day before morning prayer.

The most frequent modern usage of the mikveh is for purification by the menstruant woman. As such, every Torah observant community maintains a mikveh.

According to rabbinic understanding of the Biblical sources, a mikveh must be connected to a natural spring or well of naturally occurring water, and thus can be supplied by rivers and lakes which have natural springs as their source. A cistern filled by the rainwater is also permitted to act as a mikveh‘s water supply so long as the water is never collected in a vessel. Similarly, snow, ice and hail are allowed to act as the supply of water to a mikveh no matter how they were transferred to the mikveh. A river that dries up on occasion cannot be used because it is presumed to be rainwater and not spring water, which cannot purify while in a flowing state. Oceans and seas for the most part have the status of natural springs.

A mikveh must be built into the ground or built as an essential part of a building. Portable receptacles, such as bathtubs, whirlpools or Jacuzzis, can therefore never function as mikvehs. A mikveh must, according to the classical regulations, contain enough water to cover the entire body of an average-sized person; based on a mikveh with the dimensions of 3 cubits deep, 1 cubit wide, and 1 cubit long, the necessary volume of water was estimated as being 40 seah of water. The most stringent opinion holds that one seah is 14.3 liters, and therefore a mikveh must contain approximately 575 liters of water. This volume of water can later be topped off with water from any source, but if there were less than 40 seahs of water in the mikveh, then the addition of 3 or more pints of water that was at any time intentionally collected in any vessel or transferred by a human, would render the mikveh unfit for use.

The mikveh is used to transition from one spiritual state to another. It is fitting that root of the word mikveh means hope. At these points in our lives we go through a sort of rebirth, symbolized by the emergence from the mikveh waters, and are filled with the hope that we will be able to unleash our full spiritual potential and reach the state of spirituality that we are trying to attain.