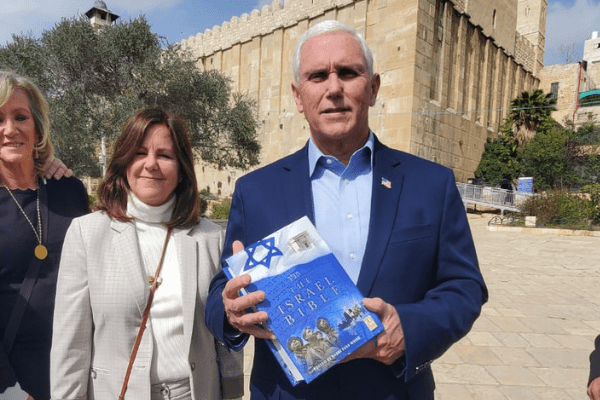 And then Avraham buried his wife Sara in the cave of the field of Machpelah, facing Mamre—now Chevron—in the land of Canaan.

Former Vice President Mike Pence made a bold pro-Bible statement on Wednesday when he went to visit the holy city of Hebron where the Biblical patriarchs and matriarchs are buried.

Pence proudly announced his visit on Twitter: “Great honor for @KarenPence and I to travel to Hebron today to visit the Tomb of the Patriarchs and Matriarchs at the Cave of Machpelah that Abraham bought to bury Sarah nearly 4,000 years ago,” Pence tweeted. “Abraham was the father of 3 great world religions and it was a joy for @KarenPence and I to be able to visit his final resting place,” he wrote in a separate tweet.

Pence toured the city for over an hour with Yishai Fleisher, the International Spokesman for the Jewish community of Hebron. “At the behest of the Vice President, the tour was all about heritage and the Bible and not about politics,” Fleisher told Israel 365. 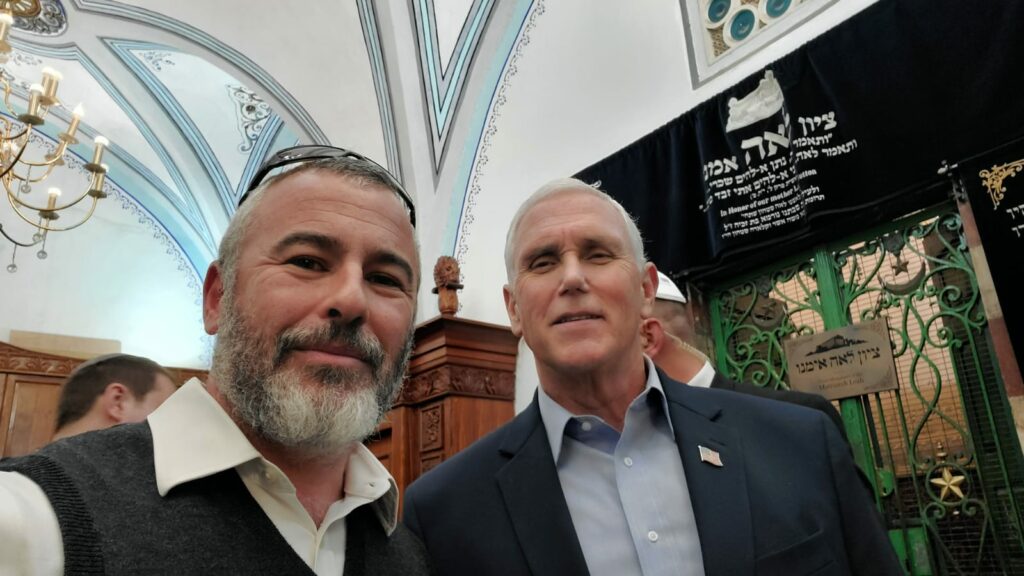 Former VP Mike Pence with Yishai Fleisher, the International Spokesman for the Jewish community of Hebron, at the Cave of the Patriarchs

To emphasize this, Fleisher presented the Pences with The Israel Bible, an Amazon bestseller that focuses on the land of Israel. Copies of The Israel Bible have been presented to other leaders and politicians such as Naftali Bennett, the Prime Minister of Israel, former MK Rabbi Yehudah Glick, and Moshe Lion, the mayor of Jerusalem.

Israel365 presents the Bibles to leaders as a modern-day version of the Biblical mandate (Deuteronomy 17:18-20) requiring a king to learn the Bible and to have a copy of the Torah in front of him at all times.

Pence prayed at the Jewish structure built by King Herod 2,000 years ago over the Machpela, the cave bought by Abraham for 400 pieces of silver to bury his wife Sara.

Thus the field with its cave passed from the Hittites to Avraham, as a burial site. Genesis 23:20

Pence also met with the chairman of the community council Rabbi Hillel Horowitz, Hebrew spokesperson Dr. Noam Arnon and Uri Karzen, CEO of the Jewish community committee. The rabbi blessed the former VP and his wife. 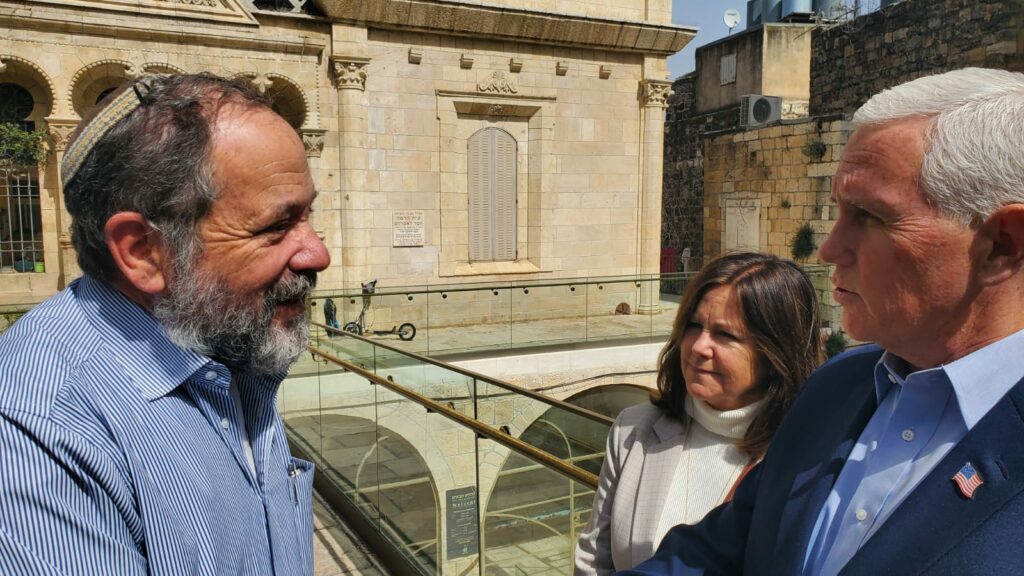 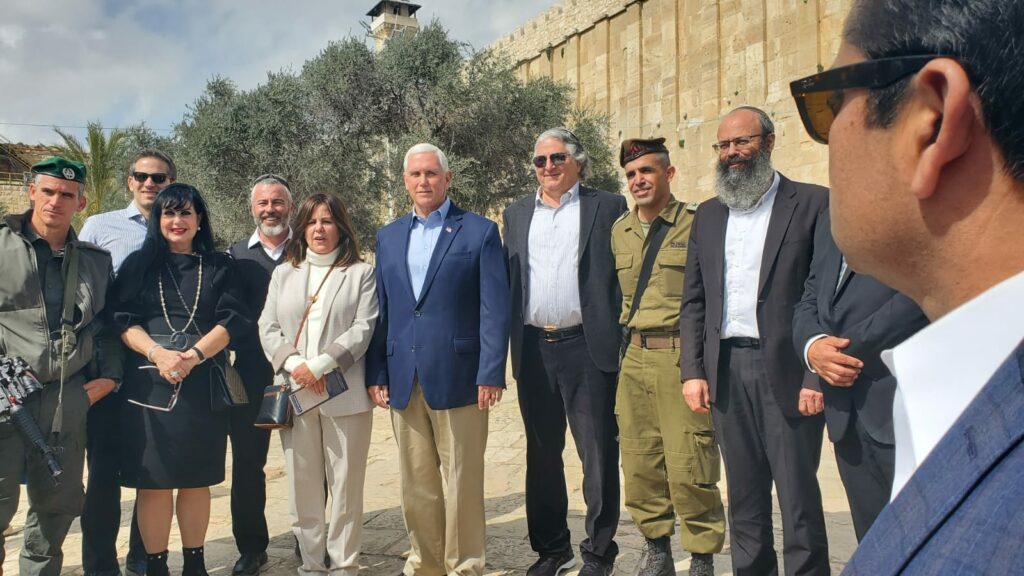 Hebron representatives expressed their appreciation for Mr. Pence’s clear support for the Jewish people and the Land of Israel and especially for his stance regarding the UNESCO declaration declaring Hebron to be an exclusively Palestinian heritage site.

“It was incredibly moving and meaningful to have this delegation come to Hebron to reaffirm the Jewish history and the Biblical significance of the site,” Fleisher said. “We want to thank him for his defense of history when they left UNESCO in protest over the anti-historical decision that Hebron was a Palestinian site endangered by Israel. It was explicitly anti-Semitic.”

“It was clear that they were touched, that they had modeled their lives after the patriarchs and matriarchs buried in Hebron. They were especially touched that the tomb was not just the patriarchs but also the matriarchs and had, in fact, become the first acquisition of the Jews in Israel because of the matriarch Sara. The Pences came as a couple to visit the founding couples, who came together as a family and gave birth to the Jewish people.”

In 2017, the World Heritage Center of the United Nations Educational, Cultural and Scientific Organization declared the Cave of the Patriarchs and Matriarchs to be a Palestinian heritage site in danger from Israel. This site is the burial place of the forefathers and mothers of the Jewish people, features the Herodian structure built over the cave during the Second Temple period. It existed thousands of years before the term “Palestinian” came into use to refer to Arab residents. In response to this decision, the United States decided to withdraw from UNESCO.

At the time, US Vice President Mike Pence delivered a powerful speech explaining their decision. He spoke at length about Abraham of the Bible with admiration and reverence. In another speech he stated, “to see Israel is to see how the God of Abraham, Isaac and Jacob keeps his promises.”

Pence and his wife were presented with gold coins produced by the Jewish community of Hebron, depicting the biblical Abraham and Sarah and an image of the Cave of the Patriarchs complex, as recognition of their support.

While touring the city, Pence was greeted by many of the Jewish residents including several political figures.

“Israel needs to be strong, and that is what our prayers are for,” Pence said while at the Wall, carefully placing a note in between the ancient stones. 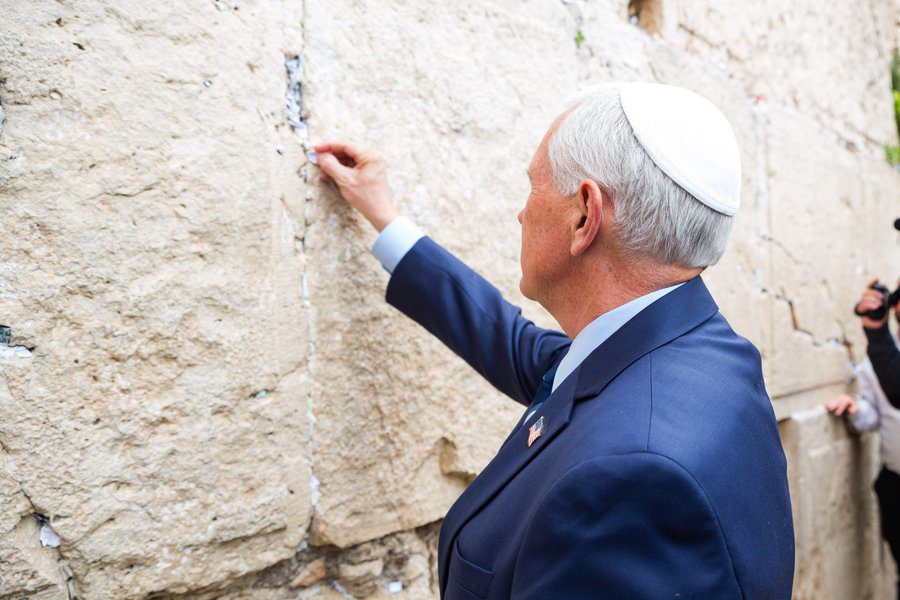