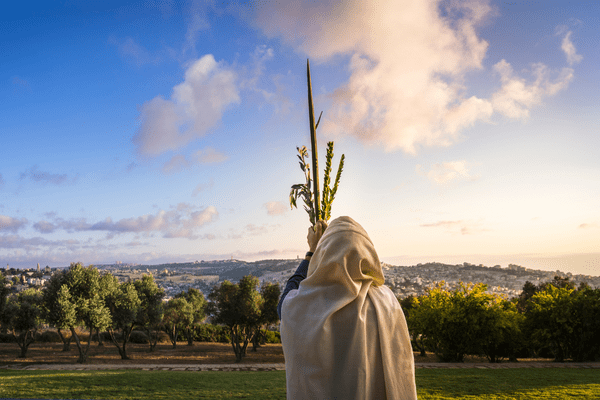 On the first day you shall take the product of hadar trees, branches of palm trees, boughs of leafy trees, and willows of the brook, and you shall rejoice before Hashem your God seven days.

I distinctly remember my first Sukkot holiday (Feast of Tabernacles) in Israel. I had arrived a few months earlier at Kibbutz Sde Eliyahu directly from Manhattan. The day before the holiday, tables were set up in front of the synagogue and covered with the four species. Unlike Jerusalem, where the finest of the four species were sold at exorbitant prices, at Sde Eliyahu all of the species were picked on the kibbutz and distributed for free. I spent an hour picking mine. When it came time to arrange them, I tied them up using a bandana I had used as a head covering in my hippie days. The next day, I marched proudly to the synagogue, my four species held high like a banner, waving them at the friends I passed on the way. Almost at the synagogue, the rabbi stopped me, guiding me off to the side.

“Today is Shabbat,” he said. “Even though it is Sukkot, we do not wave the lulav. In fact, it is muktzah, something that is forbidden to carry on the Sabbath. You will have to leave it here.”

As I lay it by the side of the road, he inspected it without touching it. He pointed at the bandana.

“It’s to hold it all together,” I explained. “I thought it looked cool.”

He shook his head. “The commandment is to wave the four species. This is made of cotton. That makes yours into five species. That is not kosher for the holiday.”

I waited until it was fully dark before sneaking back to collect my four species. I was embarrassed and abashed but that turned out to be a good thing. This was just the beginning of my confused and confusing journey toward the beautiful world of Torah Judaism.

In this case, I learned several important details about the command to take the four species. As a result of this embarrassing experience, anytime I read about the specificity of four species, I pay special attention. And this is also why it is with special pride that I present a new take on the four species that I recently learned – there is actually a connection between the four species taken on Sukkot, and the seven special agricultural species grown in the land of Israel.

The four species (ארבעת המינים arba’at ha-minim) are four plants mentioned in the Torah that we are commanded to take on the holiday of Sukkot:

On the first day you shall take the product of hadar trees, branches of palm trees, boughs of leafy trees, and willows of the brook, and you shall rejoice before Hashem your God seven days. (Leviticus 23:40)

In Talmudic tradition, the four plants are identified as the etrog (the fruit of a citron tree), the lulav (a closed frond from a date palm tree), hadass (boughs with leaves from the myrtle tree), and aravah (branches with leaves from the willow tree). One lulav is placed in the center, two aravah branches are placed to the left, and three hadass boughs are placed to the right. These are held together with the etrog and waved in all directions.

Rabbi Meir Shpiegelman from Har Etzion Yeshiva explained that there is a deep connection between the four species used on Sukkot, and the seven species that have a special significance for the land of Israel: wheat, barley, grapes, figs, pomegranates, olives, and dates (Deut. 8:8).

Rabbi Shpiegelman noted that despite the Biblical verse specifying four species, Jews actually bring seven species, i.e. one palm branch, one citron fruit, three myrtle branches, and two willow branches. This is a nearly universal custom though it does not have a source in the Torah.

The rabbi suggested that the custom of holding seven of the four species is not coincidental, and actually hints at the seven species. He divided the seven species into the following categories: three fruits (grapes, figs, pomegranates), two grains (wheat, barley), the product of olives (olive oil), and the product of dates (described in the Torah as “honey”).

Rabbi Shpiegelman explained that the lulav branch from the date palm corresponded to date honey,  the three hadas parallel the three species of fruits (grapes, figs, and pomegranates), and the etrog – a fruit used not in its original form but rather for its extract – resembles the olive, which is used primarily for its oil.

The holiday of Sukkot has an agricultural component. It is also called chag ha’asif, the festival celebrating the collection of produce into the farmers’ homes and storehouses. The sukkah (temporary dwelling) takes us out of our homes and into nature. Naturally, then, the central commandment on this day, when we give thanks to the Almighty for our bountiful yield, alludes to the seven species with which the land of Israel has been blessed.