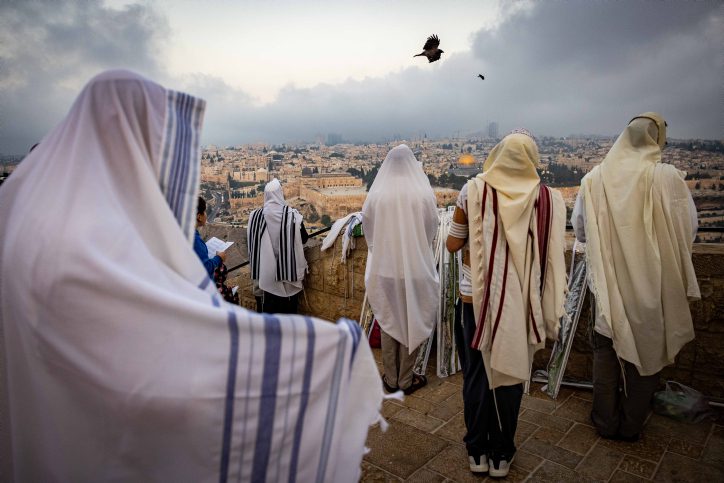 You shall rejoice in your festival, with your son and daughter, your male and female slave, the Levite, the stranger, the fatherless, and the widow in your communities.

According to Jewish tradition, Sukkot is one of four Judgment Days during the year, and on the festival, God determines the world’s water allocation for the coming year. In ancient times, life and death hinged directly on the amount of rainfall that fell in Israel, and so, Sukkot’s prayers concerning the judgment of rain are taken extremely seriously.

Despite the seriousness of God’s judgment, many of Sukkot’s water-related prayers and rituals are celebrated with festive joy. The waving of the four species that grow along the water and the nightly parties commemorating the Temple’s water libations are joyous occasions in light of Deuteronomy 16:13-15.

How do you reconcile joy and judgment? No one looks forward to Judgment Day? Given the fact that the Land of Israel is very dependent on rainfall, it seems that Sukkot should be a solemn time and not one of joyous celebration. What is the reason for such festivity?

We can learn a very important Jewish principle from a story about a father and his two sons.

A father had two sons and while he agreed to support both of them, he took two very different approaches. The father gave a very generous amount of money to his older son and told him to return again the following year when he needs runs out or needs more. He turned to his younger son and only gave him a tiny fraction of what the older brother received. When the younger son complained, the father told him to come back for more tomorrow.

At first blush, the younger son felt hurt and disappointed that he received such a smaller amount and felt that his father must love or trust his older brother more. “On the contrary,” the father explained, “it’s precisely because I love you so much that I want you to return often, for I want a meaningful relationship with you.”

Israeli Prime Minister Golda Meir once quipped that after wandering in the desert for forty years, Moses dragged Israel to the one place in the entire Middle East with no oil and no natural resources. Egypt’s Nile river made it the superpower of ancient times, and in the modern era, Saudi Arabia’s oil wells turned the kingdom into one of the wealthiest nations on earth. Israel seemingly got dealt a losing hand, the short end of the stick.

The Torah explains the purpose for such unequal distribution of resources:

For the land that you are about to enter and possess is not like the land of Egypt from which you have come. There the grain you sowed had to be watered by your own labors, like a vegetable garden; But the land you are about to cross into and possess, a land of hills and valleys, soaks up its water from the rains of heaven. It is a land which Hashem your God looks after, on which Hashem your God always keeps His eye, from year’s beginning to year’s end. If, then, you obey the commandments that I enjoin upon you this day, loving Hashem your God and serving Him with all your heart and soul, I will grant the rain for your land in season, the early rain and the late. You shall gather in your new grain and wine and oil, I will also provide grass in the fields for your cattle—and thus you shall eat your fill.

Unlike Egypt, where agricultural success came so easily thanks to the spillover from the Nile River, Israel would depend on constantly seeking out the Lord through prayer just to make it through the day. This wasn’t a sign of God’s disinterest in the Jewish People, just the opposite. God seeks a relationship with Israel and intended that His People develop key spiritual qualities such as faith, prayer, and trust.  By making His people dependent on rainfall which comes from heaven, Hashem ensures that Israel must maintain a close connection with Him through prayer at all times.

The secret behind the joyous judgment day of Sukkot is that we are looking beyond the verdict, and seeking out a deep relationship with the Judge. It is this constant connection with our Father in Heaven, by virtue of His children’s continued dependence on Him, which is the cause for great celebration on Sukkot.