The Fundamental Significance of the Seven Species 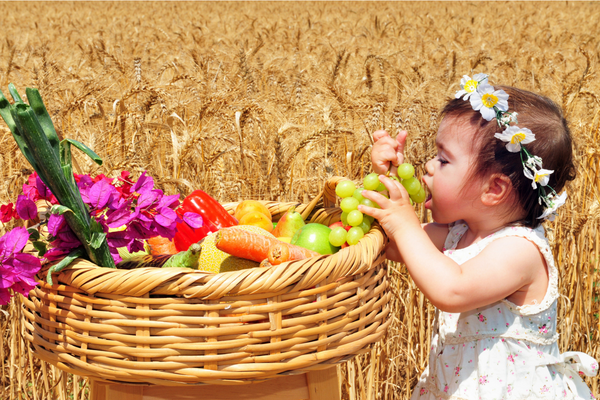 you shall take some of every first fruit of the soil, which you harvest from the land that Hashem your God is giving you, put it in a basket and go to the place where Hashem your God will choose to establish His name.

One year, I was doing my reserve duty in the Negev on a small base. On Friday night, I was guarding the front gate. To pass the time, I began learning about Bikkurim, the first fruits which are brought as an offering in the Temple. The sages describe how they were brought to Jerusalem in baskets and the entire city came out, singing and dancing, to greet the bearers of fruit. Even the king joined the festivities.

The description was so vivid that I couldn’t help myself; I got up, left the guard booth, and started to sing and dance in full combat gear.

I suddenly realized that my learning about Bikkurim while wearing an IDF uniform was especially poignant as the first fruits may only be brought after the Jews conquer and settle the promised land. This made me even happier so I danced another jig to celebrate.

According to the Sefer Hachinuch, a book written anonymously about the commandments of the Torah, the reason for the command to bring Bikkurim is as follows:

“The roots of this mitzvah… we should know and recall that all of our blessings in this world are from God, and therefore we are ordered to present to the servants of His House the first fruits that ripen on our trees… we will become worthy of blessings and our fruits will be blessed.”

But Bikkurim may only be brought to Jerusalem after the Jews conquer and settle the promised land (Deuteronomy 26, The Israel Bible p. 500-501). And in the text recited when the Bikkurim are brought we focus on the land:  “Wherefore I now bring the first fruits of the soil which You, Hashem, have given me” (verse 10).

It seems, then, that the commandment is actually about giving thanks for the land, and recognizing that the land itself is a gift from God.

As anyone who has toured the Holy Land knows, Israel is indeed a blessed land. But the one thing that Israel is not blessed with is an abundance of rain. The only way for farmers to survive in Israel is to irrigate. Even the driest regions become lush in the winter, but in the summer it rarely rains. There are wild plants that can survive the dry summer months, but cultured plants cannot survive without irrigation.

Agriculture, however, is not a part-time seasonal hobby. For farmers to subsist in Israel they must irrigate, especially in the summer.
It seems strange, then, that the Bible describes the land as a good land flowing with water:

For Hashem your God is bringing you into a good land, a land with streams and springs and fountains issuing from plain and hill; Deuteronomy 8:7

It is important to note that this description of Israel is in the context of the seven species that are especially blessed in Israel:

a land of wheat and barley, of vines, figs, and pomegranates, a land of olive trees and honey;a land where you may eat food without stint, where you will lack nothing; a land whose rocks are iron and from whose hills you can mine copper; when you have eaten your fill, give thanks to Hashem your God for the good land which He has given you. Deuteronomy 8:8-10

While having enough water is not something that we can depend on in the Holy Land, every farmer in Israel knows that the seven species are unique in that their growth patterns are compatible with the water patterns in Israel – they can survive there on rainfall alone without irrigation. They survive on the blessing of water that comes directly from God, from His providence.

In other places, rain is result of natural processes. In Israel, the rain is a sign of God’s relationship with the Jews, dependent on our following in His ways, keeping of His commands and our prayers. This is a trait that is unique to Israel, and is only in place when the Jews inhabit the land.

Based on this, Rabbanit Shoshana Boublil concludes that the first fruits of the seven species are, therefore, the best affirmation that we have arrived in the Promised Land. They represent the blessing of the land, and that is why we go to Jerusalem to give thanks for this land with the seven species in hand. They are proof that the land has been given to the Jewish people, and of the special loving relationship between the people of Israel and the Creator of the world.

This is especially important as we approach the High Holidays. The period of Rosh Hashannah (Jewish New Year) and Yom Kippur (Day of Atonement) is a time for intense Teshuva (repentance). These are followed directly by Sukkoth when we begin to pray for the winter rains. We need to ask ourselves if our service to God has merited the gift of rain and sustenance.

As the manifestation of the covenant between God and the Jewish people, the Land of Israel is the highest possible expression of our relationship with God. “Owning” the land of Israel comes with an obligation to dedicate ourselves to God and forge a relationship with Him. More than any other fruit, the seven species reflect God’s interaction and sustenance, reminding us of our obligations while also showing us God’s love for His land and His people.