Fins and Scales: How Eating Kosher Fish Makes You Righteous 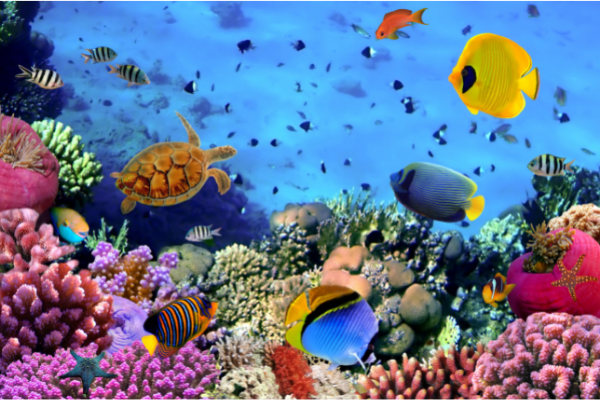 Leviticus introduces the classifications of clean and unclean meat. It contains laws regarding not only land animals, but anything edible that comes from the sea as well. The rules for sea creatures are really quite simple, requiring two elements for kosher sea animals; fins and scales.

The Talmud (Niddah 51b) explains: “All [fish] that have scales also have fins [and are thus kosher]; but there are [fish] that have fins but do not have scales [and are thus not kosher].” The Talmud argues that ritually clean fish have a distinct spinal column and flattish face, while ritually unclean fish don’t have spinal columns and have pointy heads

This rule means that practically speaking, we need to only identify organisms that have scales and can ignore the portion of the rule about fins. Nachmanides, also known by the acronym “Ramban”, comments that the scales of a kosher fish must be able to be removed either by hand or by knife without damaging the underlying skin. This opinion was universally accepted by all authorities of Jewish law in his time. This excludes sharks, as their scales can only be removed by damaging the skin. 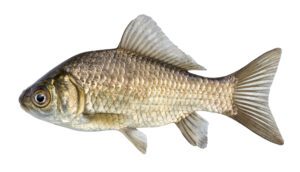 Carp, a kosher fish with fins and scales (Shutterstock.com)

As such, catfish, eel, lamprey, hagfish, and lancelet are not kosher as they do not have true scales. Crustaceans and mollusks are also prohibited. The prohibition also includes oysters and clams, shrimp, crawfish, lobster, squid, and octopus as well. Sea mammals and aquatic reptiles are also excluded as they do not have scales.

There is a controversy regarding swordfish which is heavily affected by the aging process. When young, their scales can be removed without damaging the skin, but when they reach adulthood it cannot.

Another controversy involves sturgeon. Most Orthodox Jews hold that sturgeon, the source of black caviar, does not have true scales and therefore is not kosher.

The laws regarding kosher animals follow the dedication of the Tabernacle. The classifications for animals (wild and domestic) and fowl are relevant for the sacrifices brought in the Temple. But the laws regarding which fish are fit for consumption, also included in the laws of kosher animals, are not relevant to the Temple service since the service does not include creatures that live in water. As such, fish do not require shechita (kosher slaughter), nor does the prohibition against eating blood apply to them.

In the Talmud (Shabbat 118b), fish is described as “delight,” and was thus considered a fine addition to the Shabbat meal. Futhermore, on Shabbat, we eat foods that are associated with the number seven. The Hebrew word for fish is dag (דג), which has the numerical value of seven.

The Talmud relates the story of how Yosef Mokir Shabbat, “Yosef Who Cherishes Shabbat,” would always buy fish in honor of Shabbat. He thus merited to discover a precious gem in the belly of a fish, which resulted in him becoming very wealthy.

Nachmanides suggested that what one eats becomes part and parcel with their entire being, affecting not only the physical body but even their personality. Since the impure animals have negative traits, God did not want us to eat them, lest we take on those negative traits. In Jewish mysticism, fish are considered righteous as they were not killed in the flood of Noah. As such, partaking of fish imparts a bit of righteousness.

The word ‘leviathan’ in modern Hebrew refers to whales, marine mammals that subsist on plankton. Though whales are not kosher, leviathan may be consumed in the end of days. The term originated as a formidable fish in Jewish mythology. A section of the Talmud describes the post-Messianic role of the Leviathan. In the Tractate of Baba Batra 75a, it is written that God originally produced a male and a female leviathan. God became concerned that in multiplying, the species would destroy the world. God killed the female Leviathan, preserving her flesh for the special banquet that will be given to the righteous on the arrival of the Messiah. The banquet will be held inside a huge tent made from the Leviathan’s skin.