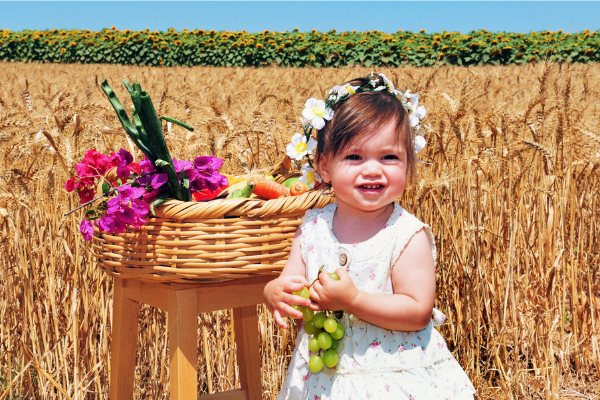 you must count until the day after the seventh week—fifty days; then you shall bring an offering of new grain to Hashem.

Shavuot is an annual Jewish holiday, one of the three Biblically mandated pilgrimage festivals when, in Temple times, Jews ascended to Jerusalem. It is observed after the Jews complete a seven-week count beginning on the second day of Passover:

You must count until the day after the seventh week—fifty days; then you shall bring an offering of new grain to Hashem. Leviticus 23:16

In the days of the Temple, the Sanhedrin (High Court) would appoint three agents to go to a field on the eve of Passover, in order to select barley plants for the omer offering. The plants would be bound together while the grain remained rooted in the soil. The agents would then return to Jerusalem to bring their Passover sacrifice and conduct their Passover seder.

The next night, as the first day of Passover ended, the three agents would return to the field with scythes and tools for harvesting the barley. They were accompanied by crowds celebrating the mitzvah (commandment). The three representatives of the Sanhedrin would harvest precisely three se’ah – approximately seven-tenths of a bushel – of barley and bring it to the Temple.

That same night, the harvested barley was flailed and winnowed. The edible seeds were roasted and finely ground. The flour was passed through 13 sifters. One-tenth of an ephah, about 14 cups, was set aside.

The next morning, a lug, about two cups, of olive oil, and a handful of frankincense were added to the flour. A kohen (priest) then took this offering, known as the omer offering, to the eastern side of the Incense Altar which was inside the Temple sanctuary. He would face the southwestern corner of the main altar and wave the grain in a wave offering. This offering was a prayer that God would send rain and dew in their proper times. The priest would then take one handful of the grain and burn it on the altar.

After this offering was brought, the new grain was permitted to be eaten. The leftover of the sacrifice was kept by the priest and is listed as one of the twenty-four priestly gifts.

Also on the night that the first day of Passover ended, Jews begin counting 50 days until the holiday of Shavuot. An agricultural festival, Shavuot comes at the end of the winter during the grain harvest and, as such, was observed in the Temple by an offering of two loaves of bread. The grain for theses loaves was taken from the first wheat of the season. They were large, rectangular in shape with four mini towers at each corner of the loaf. Before baking the loaves, the kohanim (priests) would pinch off a handful of flour and throw it into the fire on the altar that stood at the center of the Great Temple.

In the days of the Temple, Shavuot also marked the beginning of the period during which the first fruits of the seven species which have a special significance to Israel were brought to Jerusalem as an offering. This lasted until Sukkot (Festival of Booths).