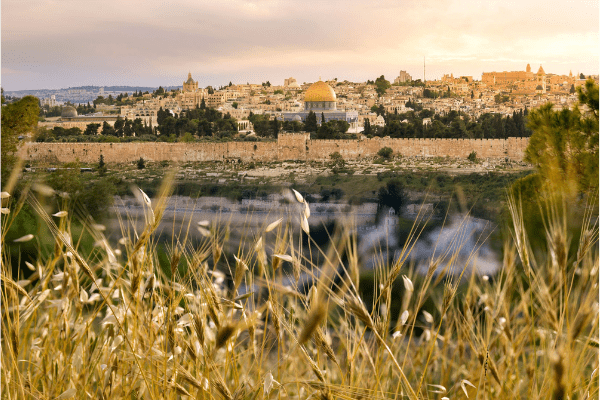 The Omer, a biblical measurement of approximately 43 ounces, refers to the wave offering of barley that was brought to the Temple along with a sacrifice of a lamb. Before Passover, emissaries of the Sanhedrin would go out to the field of barley and tie the grain into bundles while it was still attached to the ground. On the evening after the first day of Passover had ended, the emissaries would return to harvest three se’ah (approximately 6.5 gallons) from the sheaves they had prepared with three sickles and place the grain in three baskets.

The harvest, an activity normally prohibited on Shabbat, would even take place on the Sabbath.

The barley would be taken to the Temple courtyard where it was beaten, winnowed, and the kernels roasted. After grinding, the flour was sifted through 13 sifters. One-tenth was removed and mixed with oil, and a handful of frankincense was placed upon it. It was waved in the eastern portion of the Temple courtyard in all four directions—up, down, right, and left. It was then brought close to the tip of the southwest corner of the altar like the other meal offerings. A handful of the meal was taken and offered on the altar’s pyre. The remainder was eaten by the priests like the remainder of all other meal offerings.

The Israel Bible explains this:

The omer is an offering of barley brought to the Beit Hamikdash in Yerushalayim on the second day of Pesach, corresponding to the sixteenth day of the month of Nissan. Only once this offering was brought, all grain that had taken root prior to the time of the offering may be eaten. According to the Sages (Kiddushin 38a), it was on the sixteenth of Nissan that the Israelites ran out of manna after it ceased to fall following the death of Moshe. The offering of the first grain in the Beit Hamikdash on that day each year reminds us of the eternal lesson of the manna. We dedicate a portion of our crops to our Creator before we eat from them ourselves, to remind us that no matter how hard we work the land, and despite the tremendous human effort required to produce it, our sustenance is really a gift from God in heaven.