Are You Moving Forward on Your Journey Towards God? 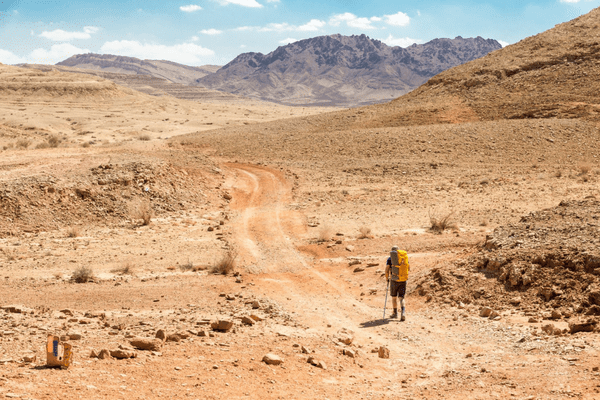 Tisha B’Av is one of the most intense days of the Hebrew calendar. A three week build-up, which ends with nine days of austerity, culminates in this day of crying and mourning. Every year, just before Tisha B’Av, Jews around the world read the Torah portion of Devarim (Deuteronomy 1:1–3:22).

What is the connection between Tisha B’Av and the portion of Devarim?

The Children of Israel spent forty years in the wilderness, making a journey that should have taken only a few weeks. The time spent in the desert was not just to arrive at a destination. In those years, the Hebrews were transformed from a loose conglomeration of family tribes into a nation, from a generation of slaves into a free people.

The portion starts with seemingly innocuous verses listing the stops that the Israelites made in the desert. The medieval commentator Rashi noted that the stops in the desert were not just geographic waypoints. Each stop represented a spiritual challenge they faced along the way and a rebellion against God.

But an even stronger connection is the repetition of the sin of the spies in this Torah portion. Indeed, coming at the end of the forty year exile, retelling the story emphasizes the painful implications of that particular sin.

The sages tell us that the sin of the spies took place on the ninth of Av. As the Children of Israel sat weeping over the report of the spies, God said to them: “You cried tonight for no reason, I will give you generations of crying for good reason.”

Rabbi Joseph B. Soloveitchik writes that had the Israelites not sinned with the spies, the journey to Israel would have been the final journey of the Jewish people. Moses would have been the Messiah and there would never have been exile, destruction or persecution. But since they sinned, Moses did not become the Messiah and the Jews had to endure all of these challenges and tragedies over the course of their difficult history.

How did this happen? After witnessing the plagues in Egypt, the splitting of the sea and the destruction of Pharaoh and his army, and after receiving the Torah, the Children of Israel surely felt that they had reached a plateau in their service of God.

But the sin of the spies was a wake-up call, a shock to their system, screaming at them that they still had far to go.

Similarly, imagine the glory of the Temple in Jerusalem. Surely the Jews of that time felt that everything was finally as it should be. This led to indifference and a spiritual lethargy.

Serving God is a dynamic relationship, a journey and not a destination. And each stop on the journey is a challenge, offering new possibilities for serving God but also new dangers of failure. Each challenge bears implications.