Why Israelis Rank High in Quality of Life and Happiness 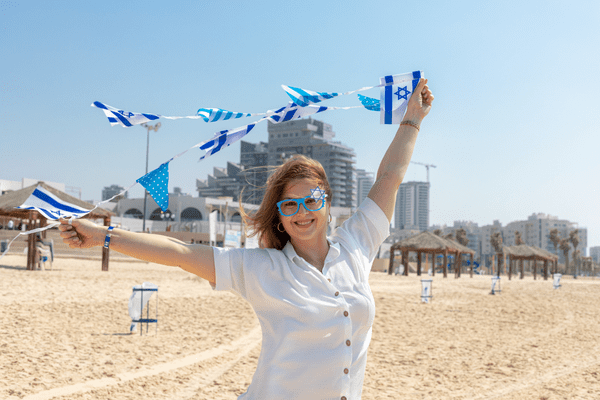 But let all who take refuge in You rejoice, ever jubilant as You shelter them; and let those who love Your name exult in You.

Despite all the dangerous threats surrounding the modern Jewish State, Israeli citizens consistently rate extremely high in global surveys measuring quality of life and happiness. This year, Israel ranked ninth in the 10th annual World Happiness Report issued by the United Nations on March 18, moving up to its highest-ever position.

But why are Israelis so satisfied with life if they live with constant threat of military conflict, terror attacks and a high cost of living? What is the secret to their happiness?

DISCOVER THE SECRET OF HAPPINESS

The answer to this question can be found in King David’s 5th psalm.

Psalm five is a morning psalm.  Or better yet, a morning prayer. As David says:

By expressing this Psalm at daybreak, David is attempting to express how a particular part of the day could affect the moods of a human being.  David realizes that the nature of being human is to have different moods, depending on many factors in one’s life.  Some factors include the time of day, the weather, and the surroundings.

All of these will influence a person, change their demeanor, and modify their outlook.  For David, a morning sun, the light of dawn, and the fresh smell of dew motivated him to greet his Maker in a certain positive way.

Morning is a time of brightness, excitement, expectation, and confidence. As Davis says:

Evening, on the other hand, is full of fear, uncertainty, insecurity, and darkness.  The first half of the aforequoted verse is a reference to the evening:

“One may lie down weeping at nightfall”

The weeping stems from the sense of unknown, an eerie feeling that you are not in control.  Who is?  In ancient times when no lights were lighting up the streets, one had to run home before sunset for fear of robbery or some other mishap.  But even nowadays, in our modern scientific world, the same feeling takes hold of us when the evening draws near (it is for good reason that horror movies usually take place at night).

“To proclaim Your steadfast love at daybreak, Your faithfulness each night” (92:3).

In the brightness of morning we see clearly all of the goodness and kindness that God does for us. But at night we require faith in order to believe that things will be OK.

Our psalm is a morning psalm.  David calls out to God at daybreak and we sense that he is feeling confident. Despite his troubles, his children rebelling, his enemies attacking, he knows (and almost expects) God to be by his side.

What gives him this feeling of confidence?

But I, through Your abundant love, enter Your house; I bow down in awe at Your holy Temple.” (verse 8)

It is his relationship with God that makes him feel secure. Knowing that the Lord is on his side gives him the confidence to feel that everything will be OK. It allows him to see things as they are in the morning, and not in the evening.

While their sense of purpose in helping to reclaim the land of their forefathers certainly contributes to Israelis’ high levels of satisfaction, David sums up the true key to their happiness in the second to last verse of this psalm: “all who take refuge in You rejoice” (verse 12).

The real secret to their happiness is the fact that Israelis have no choice but to rely on the salvation of God. By placing their trust in the Lord, they see things as they would in the morning. This leads to true happiness and sets an example for the rest of the world.