Why is Israel trying to reintroduce ostriches into the wild? 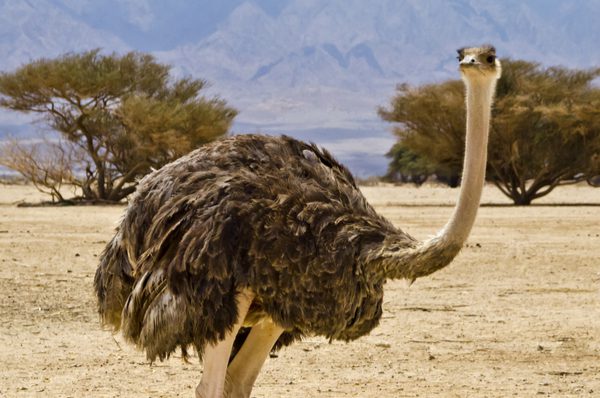 The wing of the ostrich beats joyously; Are her pinions and plumage like the stork's?

The ostrich is the largest living species of bird. It does not fly and has a distinct appearance, with its long neck, long legs and a large body.

The Land of Israel was home to wild os­triches from Biblical times until the early 1900’s when they became extinct in the region as a result of hunting. In fact, in 2006, four ancient ostrich eggs, thought to be at least 5,000 years old, were found in the Sharon region of Israel just north of Tel Aviv. The ostrich was also part of the culture of the Jews living in the Land of Israel in post-biblical times, as reflected in the rabbinic work known as the Mishnah which refers to vessels made from ostrich eggs.

Because they were common in ancient Israel, ostriches are mentioned in a number of places in the Bible. Job 39 makes mention of the cruelty of the ostrich which leaves its eggs to be trampled and is callous to its young (see also Lamentations 4:3). Verse 17 implies that the ostrich is not very intelligent, saying that God deprived it of wisdom and did not give it any understanding. The ostrich is also listed among the non-kosher birds that are forbidden to be eaten (Leviticus 11:16 and Deu­teronomy 14:15).

Despite their bad reputation in the Bible, ostriches are part of the history of the Land of Israel and attempts have been made to reintroduce ostriches into the southern region of Israel. So far these efforts have failed since the captive-born ostriches lack the necessary survival skills. But, as Rabbi Natan Slifkin writes, “Israel is not giving up. Ostriches are part of our natural and national history.” Every nation, he says, has national animals that are a part of its history, heritage, and culture. For the Jews in the Land of Israel, this includes the ostrich.