Why Do We Read About Amalek Before Purim? 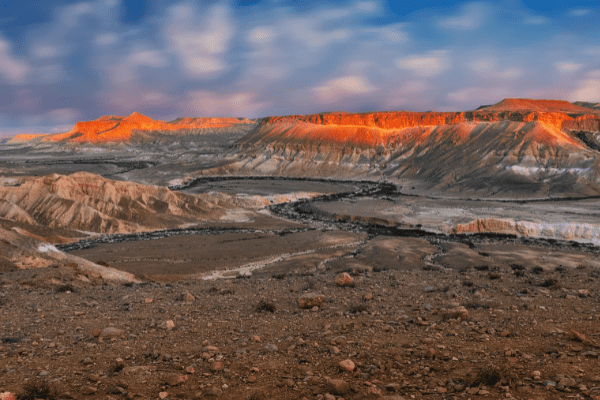 Remember what Amalek did to you on your journey, after you left Egypt

The Shabbat which immediately precedes the holiday of Purim is known as Shabbat Zachor, the Sabbath of remembering. In addition to the regular Torah reading, we read the verses commanding the Jews to remember what Amalek did to them when they left Egypt, and their obligation to annihilate the Amalekites (Deuteronomy 25:17-19). By publicly reading these verses, we are effectively performing the commandment of remembering Amalek’s actions. 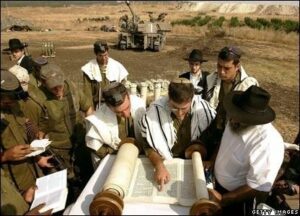 IDF soldiers reading from the Torah

In these verses, we are commanded to eradicate Amalek from the face of the earth. The Israel Bible explains this commandment:

One of the three commandments that the People of Israel are to fulfill after successfully conquering the Land of Israel is the obliteration of the Amalekites. The Amalekites are descendants of Esau and were the first to attack the Children of Israel after the exodus from Egypt. Amalek is more than just a nation — it represents an ideology antithetical to that of Israel: Absolute denial of Godliness in this world and a total lack of morality. For this reason, once the land is conquered and the People of Israel are settled, Israel was required to wage war against Amalek, and against their system of belief. 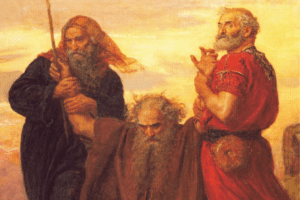 Moses at the battle of Amalek

In addition, a special haftarah (reading from the prophets) is read, describing God’s command to King Saul to destroy the people of Amalek. In this section of the Bible (I Samuel 15:2-34), Saul fails to perform this command completely, permitting King Agag of Amalek to live one night. According to the Sages, in that one night Agag fathered a child who would become the ancestor of Haman, the one who threatened the Jews in the Purim story. For this sin, Saul was removed from the throne.

And it is for this point that the commandment of remembering Amalek is particularly relevant to the upcoming holiday of Purim.  Again, The Israel Bible explains:

Shaul’s error of not completely eradicating the evil Amalek costs him his kingdom. Yet, King David’s sin with Batsheva (II Samuel 11-12) does not have a similar result. In his Book of the Principles, Rabbi Yosef Albo, a philosopher in fifteenth century Spain, notes that King David’s sin, though grave, is a personal one. Therefore, his punishment only impacts him and his family. However, King Shaul’s transgression was of a national scope, impacting the future of the nation. In fact, the Rabbis of the Midrash teach that the evil Haman mentioned in Megillat Esther descends from Amalek’s King Agag, whom Shaul kept alive long enough to father a child. Thus, the punishment has to be one that impacts his rule over the whole nation.

Zachor is the second of four special Torah readings added during or immediately before the month of Adar. The other three are Shekalim (about the half-shekel donations), Parah (about the red heifer), and Hachodesh (declaring the month of Nisan the first month on the Jewish calendar). According to many authorities of Jewish law, there is a Biblical requirement for all men to hear the special Zachor reading.

The sages teach that the command to eradicate Amalek will only be fulfilled completely when we have caused Amalek’s memory to perish and their name to be entirely erased from the world, together with the slightest remnant of anything that bears their name.